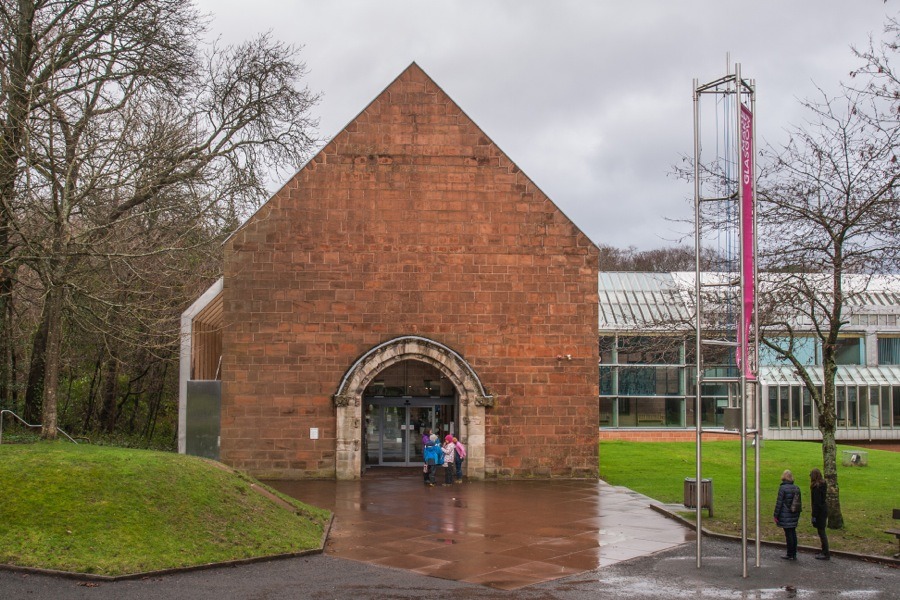 The Burrell Collection in Glasgow

With rain forecast for today we decided to head west to Glasgow and the Burrell Collection, a perfect attraction to visit on a wet day. Except that their roof was leaking! But luckily it didn’t affect us and only a small number of the museum’s artefacts had been relocated.

Sir William Burrell was a wealthy shipping merchant who amassed a huge collection of art and antiques which he donated to Glasgow in 1944. The Burrell Collection is housed within a purpose-built building in Pollok Country Park, on the south edge of Glasgow. The entrance is through a 16th century stone arch inserted into the red sandstone of the new designed in the 1970s and opened in 1983.

Upon entering you’re presented with an array of artefacts large and small. We made our way along the glazed south wall which is home to 16th and 17th century furniture on one side, and medieval stained glass on the other.

At the end of this section is a carved stone arch, again built into the wall of the modern building.

We returned to the courtyard close to the entrance, where amongst many other artefacts is a bronze sculpture of Rodin’s Le Penseur (The Thinker).

On the north wall of the courtyard, giving access to the Ancient Egypt section beyond, is the impressive 16th century main entrance from Hornby Castle in North Yorkshire. The castle was largely demolished in 1930 and Burrell acquired the doorway.

The courtyard is formed on three sides by three separate rooms. In 1916 Burrell bought Hutton Castle in Berwickshire which was to be his home until his death in 1958. Burrell commissioned Robert Lorimer, and later Lorimer’s former pupil Reginald Fairlie, to extend the castle in order to display his collection. A new north wing was completed in 1927, and as part of his bequest three of the rooms from this wing were moved to and recreated in the Burrell Collection – the Dining Room, the Drawing Room and the Hall.

Below is the Dining Room.

Behind the Dining Room is a long glazed section of the building containing artefacts from Ancient Egypt, Greece and Rome, China and medieval Europe.

Off this section is an entrance to Hutton Castle‘s Drawing Room.

The Ancient Egypt section of the collection includes a variety of artefacts large and small, but this lid of a canopic jar – used for storing the organs of mummies – caught my eye. It takes the form of Duamutef, the jackal-headed god of the east, and would have contained the stomach.

Another small item that stood out was this Greek scent bottle.

There is a second entrance to the Drawing Room on this side of the exhibition, so I used to get another view of the massive carved stone fireplace. It looks pretty old to me, but apparently it was installed at Hutton Castle in the 1920s so isn’t original to the castle. Whether or not it came from another old building or is a “modern” design in an old style I haven’t yet been able to ascertain.

The windows of the Drawing Room feature various pieces of stained glass work.

The Hall is the third of the Hutton Castle rooms, and is furnished with, amongst other things, a 16th century oak refectory table and English chairs dating to the 17th and 18th centuries.

On one wall is a tall fireplace and chimney piece.

A large collection of Chinese art is located beyond the Hall, and includes this cute bronze sculpture of what is thought to be a hippopotamus.

Within the medieval Europe section a pair of 14th century carved French window surrounds have been built into the walls either side of a corridor containing arms and armour.

Beautiful stained glass from various parts of Europe also forms part of this section of the collection.

Above a self-contained room is a wonderfully-intricate carved wooden ceiling. Dating to the 15th century and thought to have originally been part of a church, it was later installed in a property in Bridgwater, Somerset, and was uncovered by accident in the late 19th century when the owner of the house was removing plaster.

At the far end of the Burrell Collection is the Montron Arch, an exquisitely-carved 12th century stone arch from a ruined church in Montron, France.

Also at this end of the building is the café, where we paused for much needed refreshment with views out over the wet grounds.

With just the mezzanine level left to see, we made our way upstairs. Up here is another of Rodin’s sculptures, this time the striking bust of the “Man with the Broken Nose”.

Being up on the mezzanine level gives a great view along the arms and armour corridor below.

With the museum about to close we made our way to the exit and back to Edinburgh where we had dinner at the Bonsai Bar & Bistro to look forward to.