Sunrise from Calton Hill in Edinburgh

Yesterday’s weather forecast was for a cloudless sky last night with plummeting temperatures, which often means there’d be potential for a good colourful sunrise. So I set my alarm for earlier than usual and got up well before dawn this morning, cycling up to the top of Calton Hill while it was still dark.

Calton Hill is a great spot for taking both sunrise and sunset photos. Situated at the east end of Princes Street, which runs approximately east to west, it means that the sun rises behind it in the morning gradually illuminating the streets below while in the evening there’s a great view along Princes Street towards the setting sun.

Calton Hill also benefits from having several monuments dotted around its summit, such as the Dugald Stewart monument with its distinctive fluted Corinthian columns, which add to the views over iconic Edinburgh buildings including St. Giles’ Cathedral, the tall spire of The Hub church, Edinburgh Castle and The Balmoral’s clock tower.

The rising sun was casting a warm pink glow across the city but behind me the sky was much more dramatic above Arthur’s Seat.

There was a full moon yesterday, and the almost full moon was still visible to the north-west.

One of the great things about taking photos at sunrise is that the light changes the views so much, and unlike at sunset as it keeps getting lighter you have time to experiment with different angles and viewpoints.

I fitted my zoom lens for some variety in my shots, such as the one below which shows The Balmoral’s clock tower, the Scott Monument (which we climbed a couple of weeks ago) and the Big Wheel erected in time for the opening of Edinburgh’s Christmas this weekend.

With my zoom lens attached I took the opportunity to take a close-up of the moon. 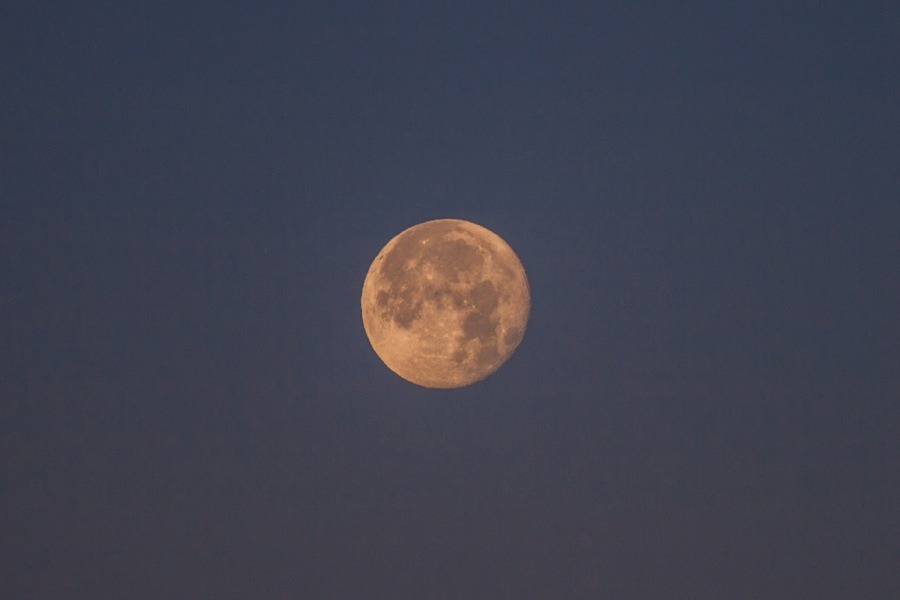 It was just below freezing and there was a thick frost on Calton Hill. Across the city plumes of steam were rising up from buildings.

The light changed once again, so I trained my lens on St. Giles’ iconic crown steeple.

In the distance the Forth Bridge and Forth Road Bridge were just visible, set against a deceptively warm-looking pink sky.

To the north the flats of the Western Harbour development at Newhaven were lit up by a golden glow.

One of the classic views from Calton Hill is straight along Princes Street.

At the West End of Princes Street are the triple spires of St. Mary’s Cathedral with the copper-clad bell tower (modelled on that of the Church of San Giorgio Maggiore in Venice) of St. George’s West Church visible to the left of them.

Although Calton Hill isn’t the highest of at just 103 metres (around 338 feet) it’s enough to lift you above the majority of the buildings in Edinburgh meaning views across the city to the Pentland Hills beyond.

Because the sun was rising from behind Arthur’s Seat it meant that while Princes Street was largely in shadow the sun’s rays were creeping around its edges and illuminating the Old Town.

Which had the effect of creating a riot of autumnal colour in Holyrood Park.

As the sun continued to rise the sky lightened and the moon descended.

I always think there’s something rather pleasing about looking down on a city’s roofscape. It gives you a completely different perspective to being at street level, changing the sense of scale.

By now the sun was just about to rise fully from behind Arthur’s Seat.

With the sun now fully up I took a few more photos before heading for the warmth of home.