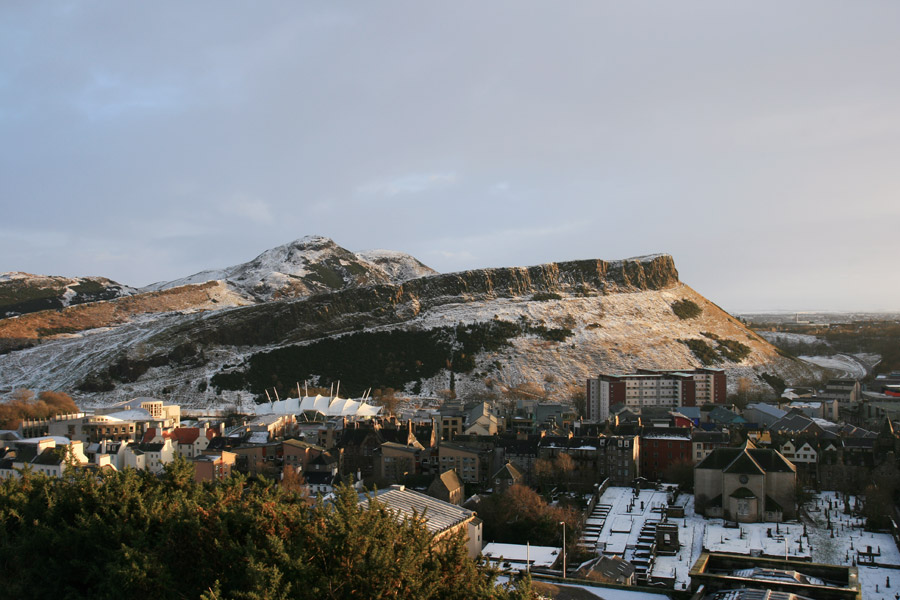 Last night Edinburgh got its first decent snow of this winter, probably around 5 or 6 centimetres. It had started to melt by the time we set off today, but there was still plenty of the white stuff around as we headed up onto Calton Hill.

Although the sky was blue and the sun shining, looking out across Edinburgh and Leith to the Firth of Forth we could see the snow clouds rolling in.

In pretty much every direction Calton Hill has great views, but arguably the most famous is past the Dugald Stewart monument towards the castle.

Looking to the south-east is another of Edinburgh’s hills, Arthur’s Seat, with the Salisbury Crags projecting from it, dusted with snow.

On the top of Calton Hill is the National Monument of Scotland, built to commemorate the soldiers who died during the Napoleonic War.

Another iconic view from Calton Hill is that along Princes Street, with the Balmoral’s famous tower in the foreground.

Before descending from Calton Hill, we left a small creation in snow. 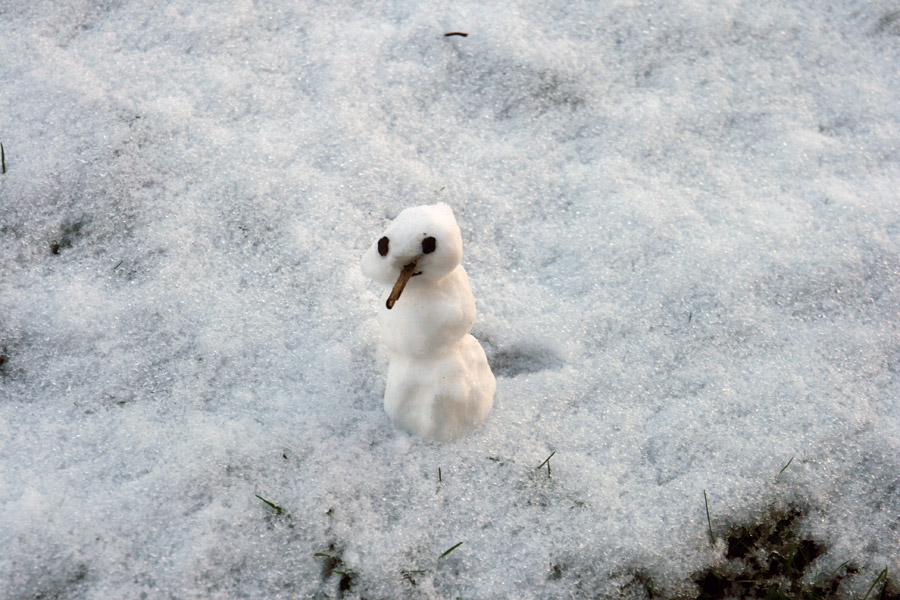 Down from the hill, we headed along Princes Street to the Scottish National Gallery to see the “Turner in January” exhibition, an annual display of Turner watercolours. Collected by Henry Vaughan, he left strict instructions that the paintings be “exhibited to the public all at one time, free of charge, during the month of January”. By the time we left the gallery it was dark, and as we climbed The Mound behind the gallery, we stopped to take a photo, looking back towards the Scott Monument.

Rounding Bank Street we reached the Royal Mile, where St. Giles’ Cathedral can be seen behind a statue of David Hume.

The statue of David Hume is by the sculptor Sandy Stoddart, and was erected in 1996. Passing philosophy students are said to rub Hume’s toe in order to gain some of his knowledge, leaving the toe shiny and polished.

We were heading for the Grassmarket, where we ended up having what was a rather unremarkable dinner. Rather than retrace our steps, we walked down King’s Stables Road in the shadow of Edinburgh Castle, along Lothian Road and onto Princes Street. There were low snow clouds behind the castle, and the light from the city was illuminating them.

Further along Princes Street we reached the Scott Monument, completed in 1844, with a marble sculpture of Walter Scott by John Steell at its centre.

The Scott Monument itself was designed by George Meikle Kemp, and stretches skywards like a great Gothic rocket ship.

The snow clouds that had been threatening all evening finally reached capacity, and large snowflakes began to fall as we made our way home.