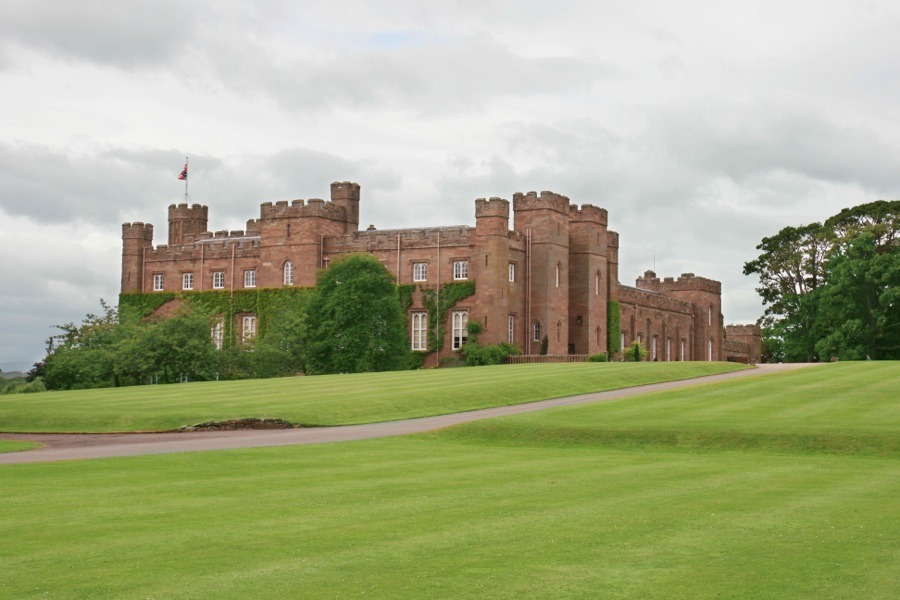 Scone Palace and the Tayside beavers

A wee while ago an old friend of mine got in touch to say that he was now working with the Scottish Wild Beaver Group and asked if we’d like to go on a Scottish wild beaver tour. Of course we jumped at the chance, so headed north to Perthshire today.

At this time of year the best time to see the Tayside beavers is after 7pm, so we decided to visit Scone Palace first, having lunch on the picnic benches at the edge of the gardens to the sound of squawking peacocks.

Scone Palace stands on raised ground above the floodplain of the River Tay, evidence of its early defensive origins. A magnificent red sandstone Tudor Gothic castellated mansion, it was built at the start of the 19th century incorporating earlier work.

On the lawn in front of the Palace were the peacocks responsible for the earlier noise. 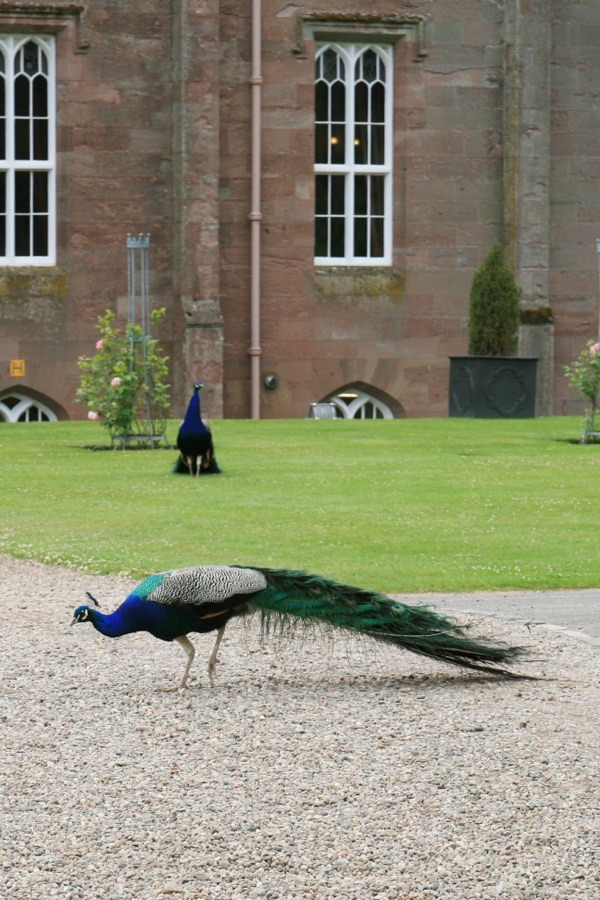 The main entrance is on the east side of the Palace, and is flanked by a pair of three storey rectangular towers.

Above the doorway is an inset panel carved with the coat of arms of the Earl of Mansfield, including the motto “Uni Aequus Virtuti” which translates as “Friendly in virtue alone”.

Photography isn’t allowed inside Scone Palace, so you’ll have to use Google Image Search to get an idea of what it looks like. But the interiors are even grander than the exterior, and well worth a visit. Of particular note is the Long Gallery, which at 45 metres long is reputed to be the longest room in Scotland.

After a couple of hours wandering around the Palace we made our way back outside and across the drive to the Moot Hill. The area around Scone Palace has a long and important history, as it was a major Pictish centre for hundreds of years. From the 9th century onwards the Moot Hill was where Scottish kings were crowned.

A parish church was built on the Moot Hill, the village of Scone having grown up close to the Palace, and it later became the Stormont Mausoleum. In front of the mausoleum is a replica of the Stone of Destiny, the stone on which Scottish kings were crowned.

Tradition has it that the Stone of Destiny, also known as the Lia Fail or Stone of Scone, was the Stone of Jacob, or Jacob’s Pillar, from the Biblical story. The Stone of Destiny was taken south by Edward I of England in 1296, and installed in the specially-commissioned Coronation Chair, although there are suggestions that the real stone may have been switched before Edward took it.

The Moot Hill affords a good view of Scone Palace from another angle.

Inside the mausoleum is a magnificent 17th century baroque monument to David Murray, 1st Viscount of Stormont.

Along the drive to the east of the Palace is a 16th century gateway, part of a defensive wall which once enclosed both the Palace and Scone Abbey. Outside the walls is the old mercat cross of Scone.

The outside of the gateway is decorated with three sets of coats of arms. On the left are the arms of the Earl of Mansfield with the motto “Spero meliora” (I hope for better things).

In the centre above the archway are the arms of James VI.

On the right is another coat of arms which presumably also belong to the Earl of Mansfield.

Along the length of the wall are various shot holes, including this rather ornate one.

The mercat cross once stood in the centre of the old village of Scone, which was on this site until the early 19th century. At a time when the Palace was being extended and modernised the 3rd Earl of Mansfield had the entire village moved to a new location a mile or so to the east – the present location of the town of Scone.

We walked along the outside of the wall to its north-west corner, where there is a round tower with shot holes.

While on this side of the wall we had a closer look at the mercat cross. The style of it suggests that it’s an old example, and may date back as far as the 15th century. 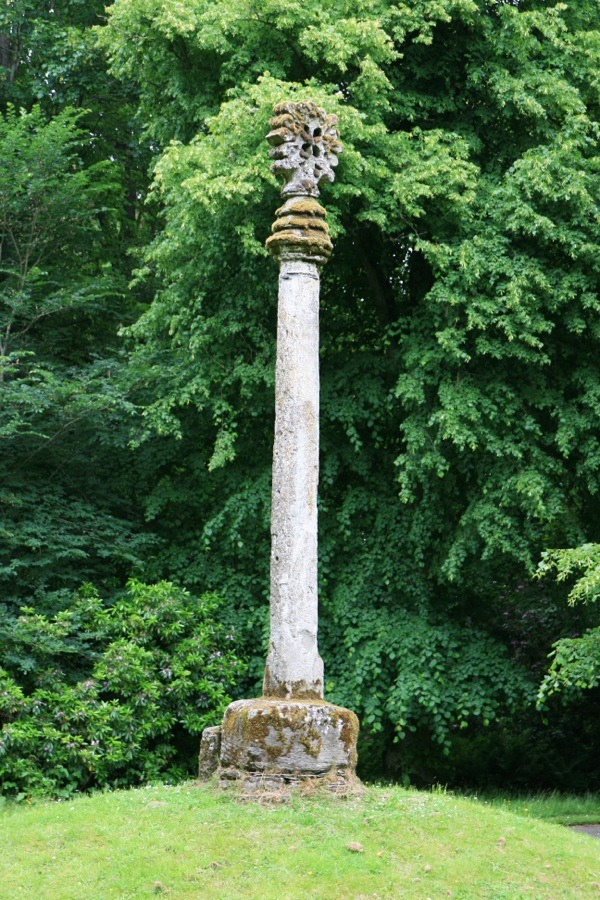 Heading south along the outside of the wall we came to a broken section, with an old burial ground visible beyond it.

We turned off the main path and into the woods, where we came across an old stone coffin. This was discovered in 1841 during excavation work between the Palace and the graveyard. The skeleton was reburied within the graveyard, and the coffin placed here.

Close to the coffin are various architectural fragments from Scone Abbey, and the top of a second coffin. Decorated with ancient-looking scripts, it is said to carry the name Alexander Mar, the 16th Abbot of Scone, although it is difficult to read.

We made our way deeper into the gardens, at this point largely a mixture of pine trees and rhododendrons.

There are also several massive sequoia trees, with wonderfully craggy and surprisingly-soft bark on their great trunks.

The trees fan out in great avenues, dwarfing everything around them.

We walked along one of the avenues until we reached the Murray Star Maze. Planted with around 2000 beech trees, half of them are copper and half are green to create a kind of tartan effect, and the star shape represents that which features in the Murray family crest.

As is often the case, the maze is best viewed from above.

The maze is close to the car park which was handy as we now had to head down to Perth for dinner at Breizh, a great French café that specialises in delicious crêpes and pizzas.

With our energy replenished, we drove north to Blairgowrie to meet up with my friend Scotty, a member of the Scottish Wild Beaver Group who work to promote the study, conservation and protection of wild beavers in Scotland.

Although the Scottish Beaver Trial in Knapdale is quite well known what is less well known is that Tayside has its own resident population of beavers, the descendants of escapees who’ve made a bid for freedom over the years.

Scotty assured us that we were almost guaranteed to see beavers tonight, and they had been quite active over the last couple of weeks, so we were quite hopeful. There were certainly plenty of signs of beavers, including the distinctive wide tracks running down the bank to the river, and trees stripped of bark.

We sat in that spot for a considerable amount of time, but unfortunately there was no sign of the beavers themselves. It was a rather pleasant and still evening, but music and shouting from a fruit pickers’ party at a nearby farm were drifting down on a slight breeze, and that may have been confining the beavers to their lodge.

After well over an hour we headed downstream in search of another vantage point, gallantly fighting our way through the dense undergrowth – actually in reality we made our way along a neatly-cut path through a tangle of weeds and wildflowers. 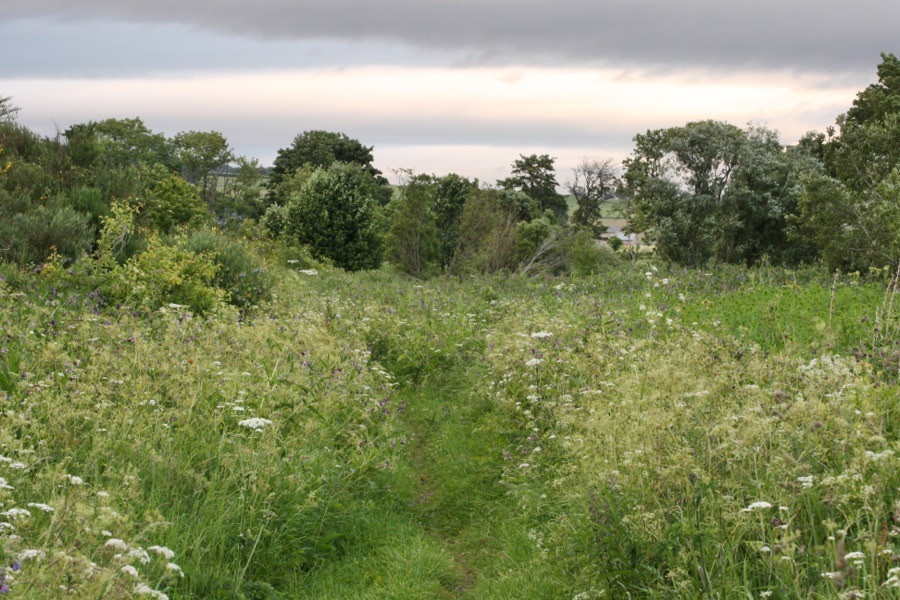 With an absence of beavers, I took to photographing the neighbouring fields

Scotty valiantly went in search of beavers, but not much was stirring. 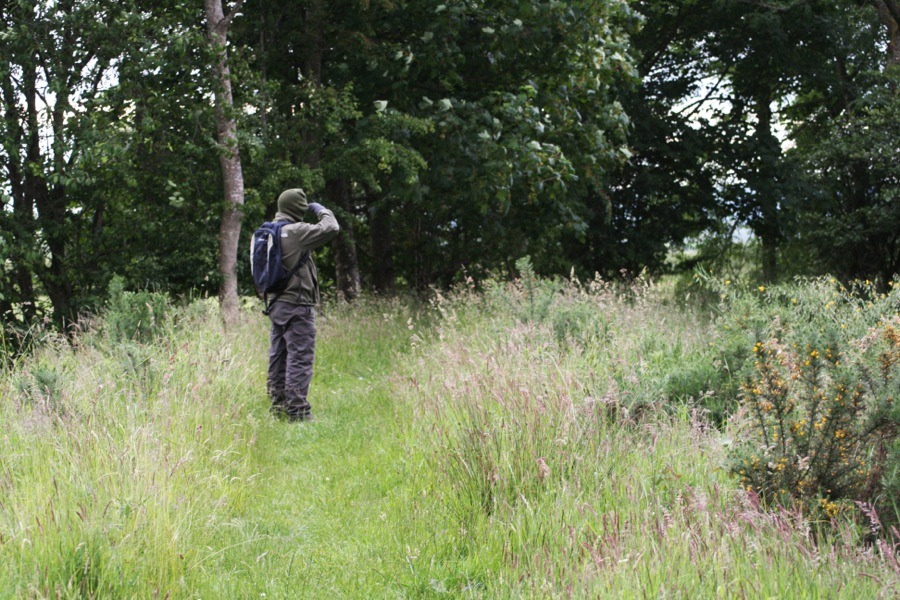 Then on the way back along the river we heard some noises which may have been beavers, so we climbed bank down the bank to the edge of the river and took up position behind a tree hanging over the river. Over the next hour or so we saw ripples emanating out in perfect circles from the base of a lodge further upstream, but no beavers.

But then we saw one! Swimming upstream back towards the lodge, we could see it, but we were hidden from it by the tree. I edged out onto the tree, camera at the ready, hanging over the river while simultaneously concentrating on both pointing my camera in the right direction and not falling in.

Luckily the beaver, most probably a yearling, passed directly underneath me as I leaned on the tree trunk. There was just enough time to take one photo before he spotted me, and with a slap of his tail disappeared under the surface of the water. I’m not sure who got the bigger shock, me or him. 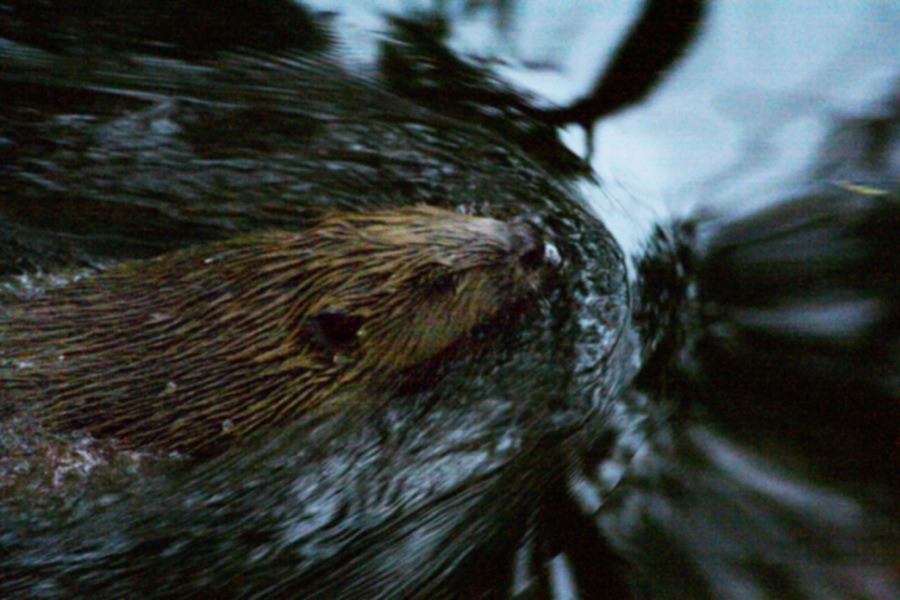 The light was fading by this time, and while our eyes had adjusted well it was a trickier prospect for the camera, balancing the exposure times to keep the images as sharp as possible while also allowing enough light in.

Now the beavers knew we were there, so there was little activity for the next wee while. But eventually the mum came out to explore what her yearling had seen, and we saw her in the distance swimming up and down the far river bank to have a look at us. 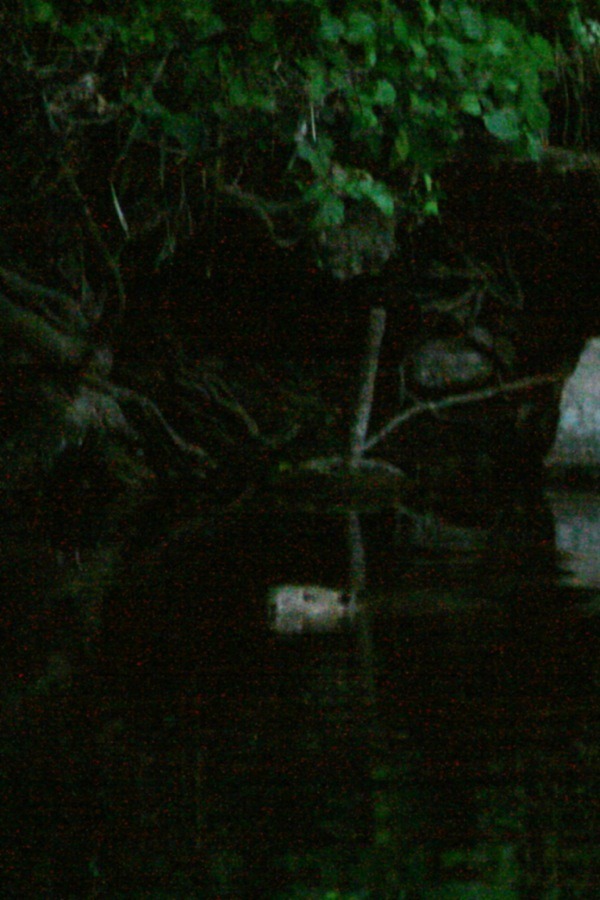 We didn’t see many beavers, but it was well worth it. The chance to see these wonderful animals in their natural habitat is one worth taking.

The Scottish Wild Beaver Group is a registered charity which organises free beaver tours in Tayside. You can learn more by visiting their website.