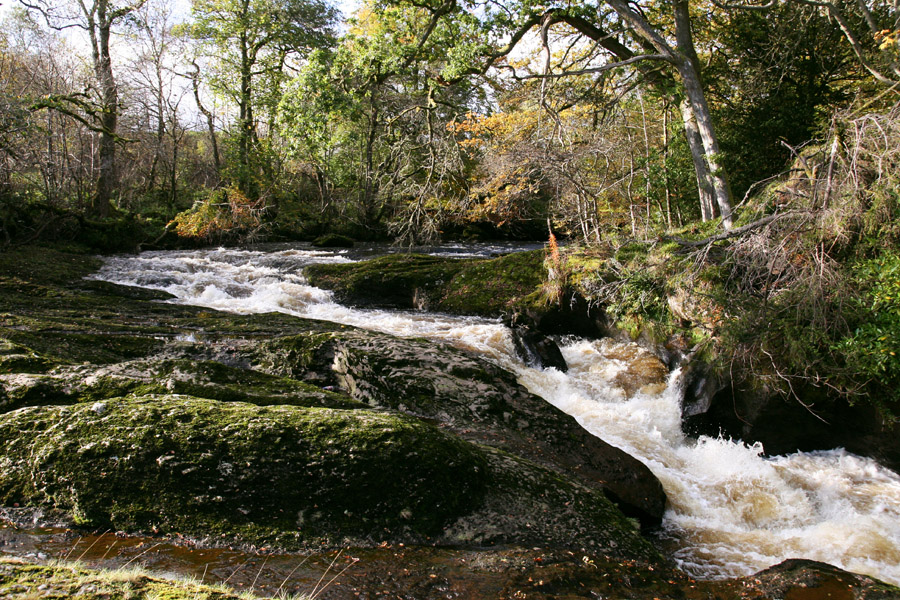 Salmon leaping and waterfalls in Perthshire

We decided to head up to Bruar today, partly to visit the shops at the House of Bruar, and partly to do the Falls of Bruar walk. But inspired by the BBC’s Autumnwatch programme we stopped off on the way at Buchanty Spout.

Buchanty Spout, on the River Almond to the north-east of Crieff, is a renowned spot for seeing salmon leaping up the waterfalls, attempting to get upriver to where they were born in order to spawn. There were probably fifteen cars in the car park and spilling out onto the road, so it was a popular location and we weren’t alone.

However there was a relatively quick turnover of people and we were still able to get a good spot at the main falls. It wasn’t long before we saw our first salmon, but the speed at which they jump is incredible and therefore quite difficult to photograph. 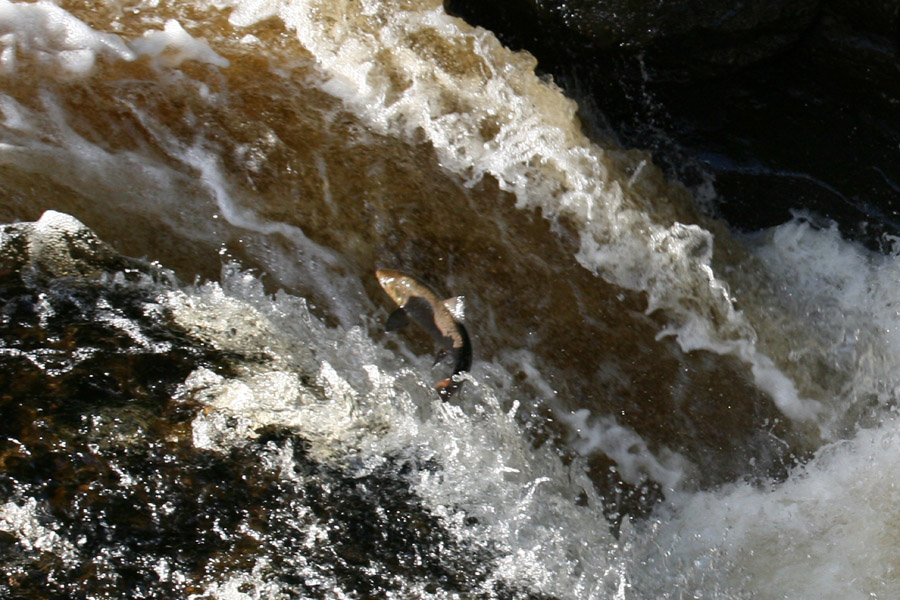 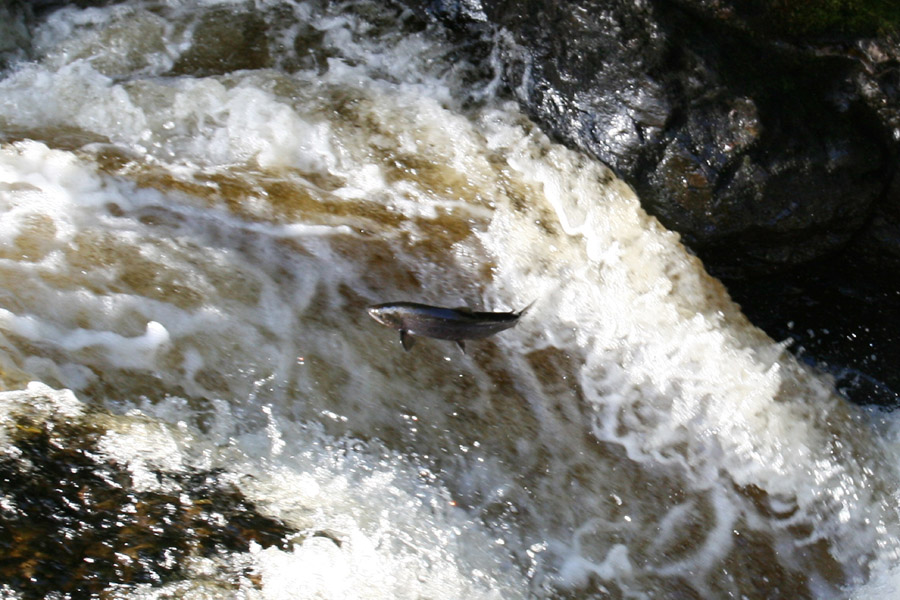 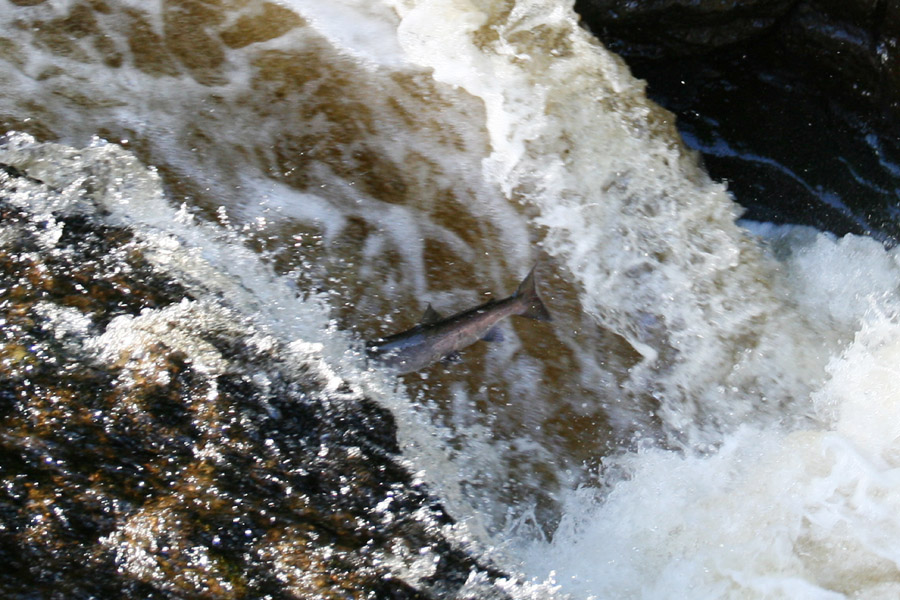 As a back up we also used a video camera to catch the salmon jumping, the edited highlights of which I have uploaded to YouTube.

We spent a good hour there watching the salmon, and although they were relatively few and far between (one jumping every five minutes or so) watching and listening to the raging torrent of water was very therapeutic.

But conscious of the need to get up to Bruar while still leaving time for shopping and walking before the fall of darkness we continued north, up through the Sma’ Glen, along Strathbraan, then up the A9.

We parked at the House of Bruar, did a bit of shopping, then headed up into the woods behind the complex. Initially the path follows the edge of the Bruar Water and is pretty flat, but it soon branches away from the burn and starts to climb.

Most of the forest is evergreen pine trees, but dotted amongst them are a few deciduous trees which where just starting to turn. 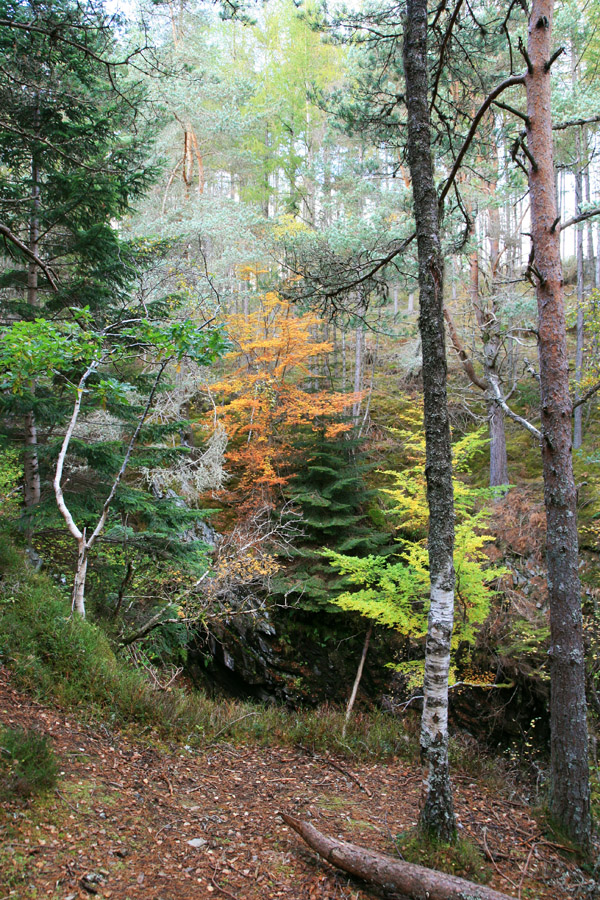 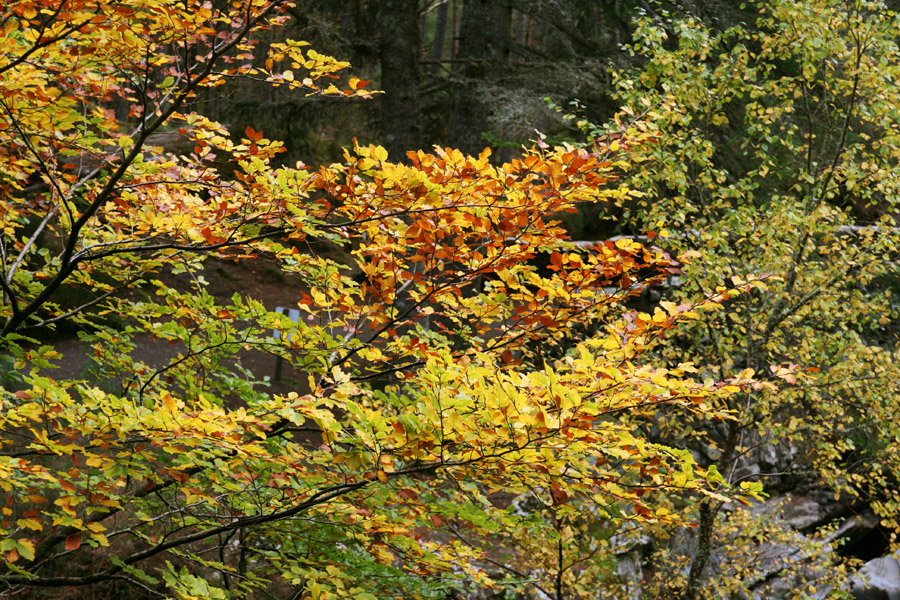 Further up the hill the path turns back towards the burn, but by now it’s running through a deep rocky gorge, as you can see from the viewpoint just below the first bridge.

Beyond the bridge is a deep pool into which another series of waterfalls pour.

Crossing the bridge we looked down to see the water rushing past beneath us.

Across the bridge and on the east side of the burn we continued to climb, the path getting ever steeper. From this side there’s a great view of the next bridge, with more waterfalls cascading down below it.

With the light starting to fade, and our hunger starting to increase, we turned around at this point and started making our way back down, pausing once again at the first bridge.

By the time we reached the bottom the House of Bruar was closing up for the night and ours was one of the last cars to leave the car park.

Since we were near Pitlochry around tea time, there was only one sensible course of action and that was to head for the Moulin Inn for something to eat!