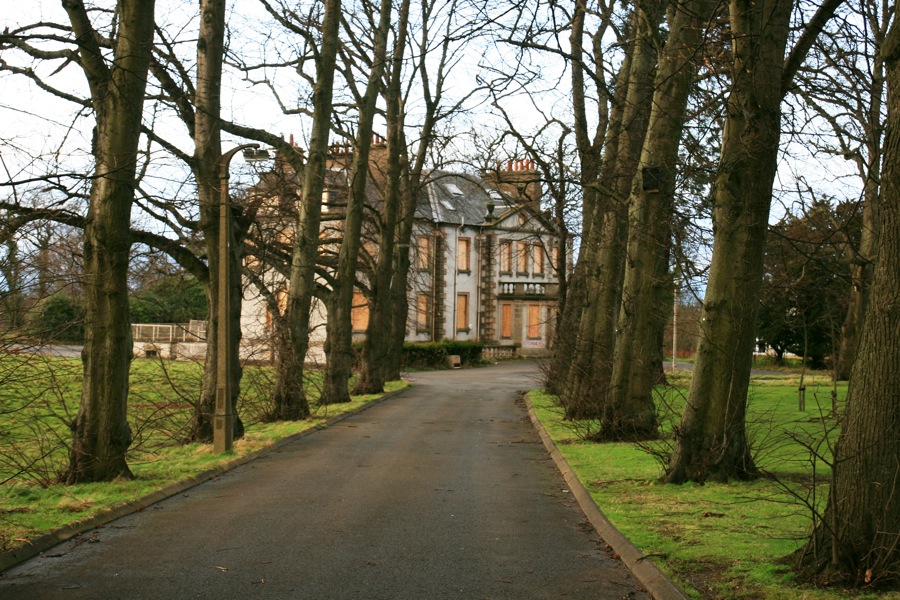 The site of Redhall Castle has been on my list of places to go and visit for some time now, but we hadn’t been until today because it’s so easy to get to, instead choosing to visit further away sites.

Nestled away in a bend of the Water of Leith to the west of Craiglockhart, it is one of the many, but lesser known, castles in Edinburgh. Or at least it used to be, the last remains of the castle having been used to build Redhall House nearby.

Redhall House was built in 1758 for George Inglis of Auchendinny, and used the red sandstone from Redhall Castle behind a harled exterior.

It was later acquired by the Edinburgh Corporation and became a children’s home, then schools were built in the grounds. In 2007 Redhall House and the surrounding land were sold to a developer, and a new housing estate was built, although plans to convert Redhall House into flats didn’t come to fruition, and it now stands empty and neglected. The windows are boarded up with plywood, although bathed in the golden light from the low winter sun they gave a welcome soft edge to the grey harling.

Despite looking contemporary with the rest of the house, the grand Classical porch was actually added around 1900, when the west wing was also added.

Around the back, out of the sun and into the shadows, the house gives off a more depressed air, with broken windows adding to the feeling of neglect.

It seems such a shame that Redhall House stands seemingly in a generally good condition, with so many period details intact, but with its potential unrealised.

The site of Redhall Castle itself is a roughly round promontory approximately 90m to the north-west of Redhall House. Now just covered with overgrown grass, the edge of the site is ringed by trees, beyond which are steep drops down to the Water of Leith. 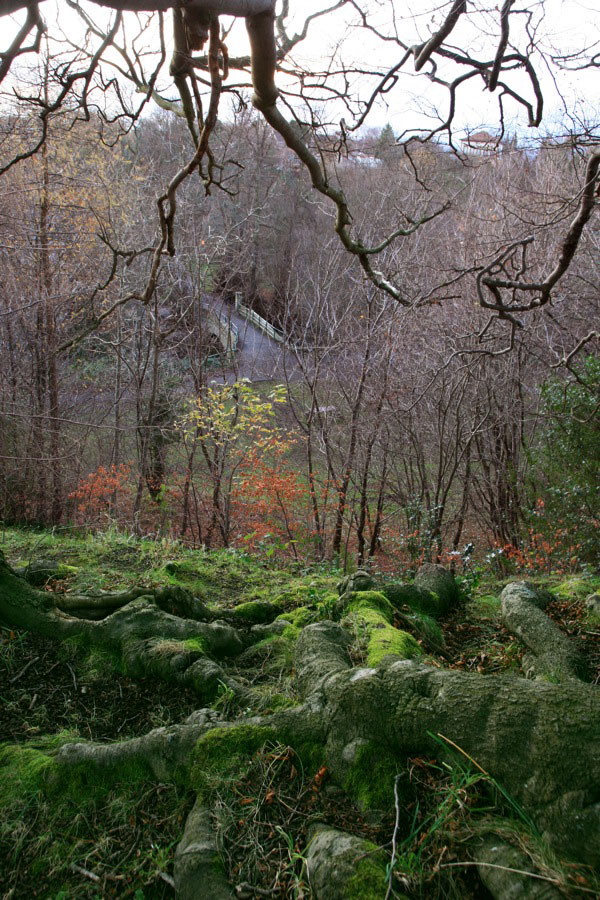 This perfect defensive position meant that it was a strategically important castle in days gone by, and in 1650 it was attacked by Oliver Cromwell. An attack from which it never recovered.

We made our way down off the promontory and through the trees, taking a rough path down to the river below. A riverside walk here follows the Water of Leith all the way from the village of Balerno outside Edinburgh, through the city to Leith itself. However we just used it for a brief glimpse of the river, before climbing back up the hill.

A couple of hundred metres to the north-east of Redhall House is a mid-18th century doocot, accessed by a path along the edge of the housing estate.

Taking an unusual hexagonal form, it has niches on its south-east side which presumably would originally have been windows out of which the doves could fly. Unlike Redhall House itself, this is something that has actually been restored by the developers.

The north-west side of the doocot is of far more interest, to me at least, as built into that side is a 16th century armorial panel from Redhall Castle.

The arms are those of Sir Adam Otterburn, a lawyer and diplomat who inherited Redhall Castle in 1533, and was the King’s Advocate from 1524 until 1538, as well as being Lord Provost of Edinburgh several times between 1522 and 1547.

With the light fading, and increasingly lumpy rain falling (which overnight would turn to the first snow of the winter in Edinburgh), we made our way back to the warmth of the car.