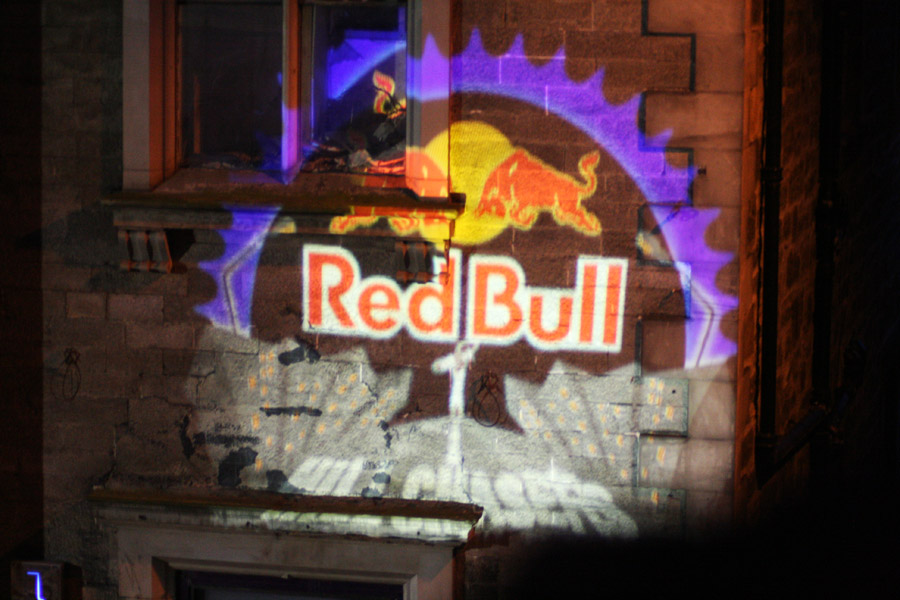 The 170 metre course ran up the cobbles of Victoria Street from the Grassmarket to the finish line at the junction with George IV Bridge. The street was packed with thousands of spectators, as was Victoria Terrace above, but we made our way along here in the hope that the higher vantage point would help us to see some of the racers.

The atmosphere was great, the crowds enthusiastic despite the cold, and Red Bull logos were being projected onto the buildings on the other side of Victoria Street.

There were so many people pressed against the railings that it was difficult to get even a glimpse of the riders, but we just about managed.

A big screen at the finish line was keeping the crowd up to date with what was going on, since although the course was short, the curve of Victoria Street meant that those at the finish couldn’t see the riders setting off from the start.

The crowds were several people deep on both Victoria Street below and Victoria Terrace above.

We decided to move down from Victoria Terrace to the finish line, where a camera crew and presenter were waiting for each rider to make it up the hill and across the line.

The compère was encouraging the crowd to shout their support for the riders, and the noisiest welcome was for legendary trials cyclist Danny MacAskill.

Ever the trickster, he even managed to pull a wheelie while crossing the finish line.

He was closely followed by another rider who also pulled a wheelie, this time on a fixie however.

Amongst 500 riders taking part in the qualifiers there was just one female cyclist, Lee Craigie, who set a time of 22.912 seconds.

We had hoped to watch the finals, but with it getting ever colder and our stomachs rumbling, we decided to call it a night.

On the way home, with the skies more or less clear of clouds, we had to stop and take some photos of the Edinburgh skyline. The view from the North Bridge over Waverley station with Bank of Scotland on one side and the Scott Monument on the other is particularly iconic.

As is that from slightly further down the bridge, with the Bank of Scotland in the foreground and Edinburgh Castle beyond.

Pausing once again, I took a photo of the wonderful Gothic rocket-like Scott Monument before putting the camera way and heading for home.