Over the Easter weekend I took a break from DIY to research the history of Old Comiston House, then cycled out to have a look at it.

The original Comiston is first mentioned in 1337 but all that remains of it is a late 16th or early 17th century tower attached to a Georgian stable block built for the nearby “new” Comiston House. I’d been meaning to visit it for years then noticed recently on Facebook that the stables were being converted into a house so that reminded me of my intention.

The stables are hidden away within a more modern housing estate just off Fairmilehead Park, which was created from part of the old estate of Comiston House. A muddy tree-lined track leads behind the newer houses to the stables, at the south-east corner of which is the old tower.

The foreman told me that while the stables are being renovated and converted, the tower will be left as it is save for some consolidation of loose masonry.

The site was a hive of activity which made for less than photogenic conditions, however the old tower is still an impressive sight to behold.

Standing around 6.0m in height, it features a corbelled upper course and a pair of gunloops for defence.

Unfortunately I forgot to ask about a carved lintel over a doorway inside the courtyard, cut with the initials “WD”, so I will have to go back at some point. A date stone inscribed with the initials AC and MD, the date 1610 and a lozenge over a scroll and rosette, which presumably came from a dormer window on the original Comiston, was later installed in the back wall of a lodge for the current Comiston House. This lodge was still standing (at NT 2453 6886) in 1942 but has since been demolished and I have been unable to ascertain the whereabouts of the date stone.

The Book of the Old Edinburgh Club (Fourth Volume)
Edinburgh, 1911

Leaving the site, I paused on Camus Avenue to take a photo of Old Comiston House‘s successor, Comiston house. Built in 1815 for James Forrest, an advocate and later Lord Provost of Edinburgh, it has now been converted into flats.

Across Buckstone Terrace from the entrance to Camus Avenue I noticed in interesting-looking squat building in a Georgian or Victorian style. 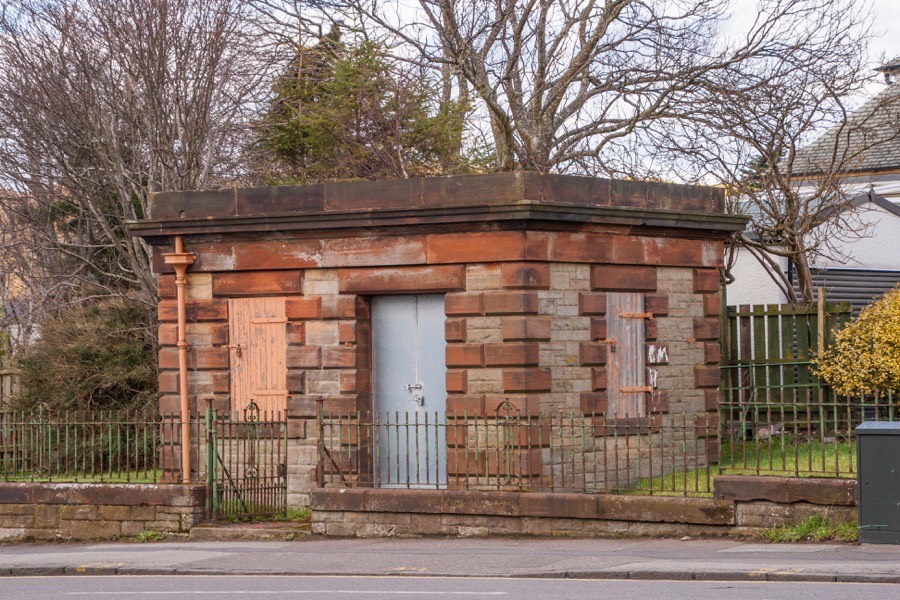 I’m not sure what it is but it may be something to do with water as there are a lot of springs in the surrounding area. In fact Edinburgh’s first piped water supply originated at the Comiston Springs, a short distance to the north-west of here, with a lead pipe leading to the Royal Mile being constructed in the 1670s.

On the way back home, while reaching the crest of the hill on Greenbank Crescent, I was presented with a magnificent view of Edinburgh Castle bathed in sunlight.