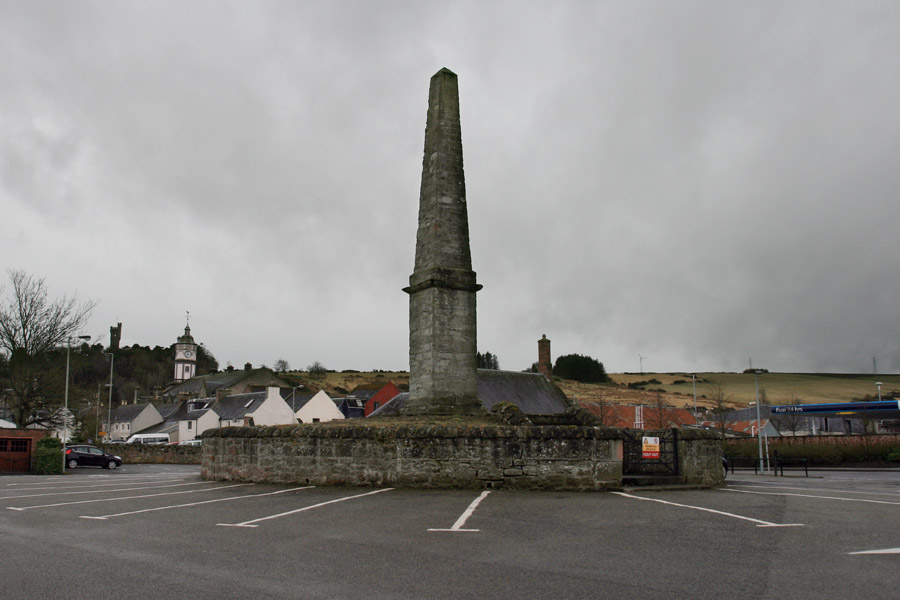 Sadly it was time to say goodbye to the Tulloch Castle Hotel this morning. Just like yesterday we had an ambitious itinerary of places we wanted to see, this time on the way home, but we started by driving the short distance down to Dingwall town centre.

In the middle of the car park is the Cromartie Memorial, built by Sir George Mackenzie, the 1st Earl of Cromartie, around 1710. It is built on a slight mound which is all that is left of Dingwall’s moot hill, itself developed from a Viking “Thing” site.

Close to the car park is Dingwall Church, within the grounds of which stands Dingwall Churchyard symbol stone. Although not completely clear with the naked eye, it is decorated on one side with three circles at the top, below which is a crescent and V-rod symbol. This face is also decorated with six cup marks.

This Pictish stone had been used as a lintel over a doorway in the church, built in 1801, but its significance was recognised in 1880 and it was re-erected in front of the church in the late 19th century.

We walked from the church down to the High Street and up Castle Street where, as its name suggests, a castle once stood. Dingwall Castle‘s origins go back to at least the 12th century, when there was a motte and bailey castle, and possibly even further. Indeed MacBeth may have been born at Dingwall Castle in 1005.

Dingwall Castle was a Royal castle, but it seems to have fallen out of favour following the death of James VI in 1625, at a time when Tulloch Castle was in ascendancy.

By the mid-18th century it was in ruins and being used as a source of stone for buildings in Dingwall, including the Castle House just behind the site of the castle, built in 1820. A 16th century doocot associated with the castle was rebuilt and restored in the 19th century, and now stands in a garden on Castle Street.

The doocot has cross-shaped gunloops or arrow slits, a rather unusual feature for a doocot.

Further along Castle Street, just within the driveway to Castle House, are the remains of Dingwall Castle. Since it was early on a Sunday morning we didn’t want to bother the owners, so took a couple of photos from a distance and left.

On a hill above the town is the MacDonald Monument, erected in 1907 in memory of “Fighting Mac”, Sir Hector MacDonald, who was born near Dingwall.

Back on the High Street we stopped at Mansefield House, built in 1897 for Alexander Henderson. Above the door on the corner of the building is an ornate tiled plaque commemorating Queen Victoria’s Diamond Jubilee.

On our way back to the car we cut down Church Street past the Town Hall, where there was another plaque. This time it was to mark the fact that The Beatles played Dingwall Town Hall in 1963, to an audience of 19 people!

A local band, The Melotones, were playing at another venue the same night, and attracted a crowd of 1200 people. Recently there was a bid to reunite the original Beatles audience.

We said our farewells to Dingwall, and headed south and east beyond Inverness on the first leg of our meandering journey home. Our first stop was at Castle Stuart.

A fantastically tall building, it’s typical of the style of castles found in the north-east of Scotland in particular. It was built in 1625 by the Earl of Moray, and consists of two square towers linked by a central wing.

We continued heading east, stopping for lunch at Brodie Countryfare before travelling the short distance to Brodie Castle. Next to the castle‘s driveway is Rodney’s Stone, a well-preserved Pictish cross slab.

On the reverse of the stone are several Pictish symbols, with two fish monsters, a Pictish elephant or beast, and a double disc and Z-rod.

Some people believe that the Pictish beast may represent a dolphin.

There several suggestions as to what the double disc and Z-rod may represent. I think the Z-rod is probably a broken arrow, and the discs may represent the sun, or perhaps shields.

The cross on the front of the stone is decorated with ornate knotwork.

We continued down the driveway to Brodie Castle, a 16th century tower which was extended in the 17th and 19th centuries.

The seat of Clan Brodie, the lands here have been owned by them since 1160, although the castle is now owned by the National Trust for Scotland.

While waiting for a tour guide to take us around the castle I took a photo of an armorial panel, before realising that photography wasn’t allowed inside. The rooms are very interesting, with architectural features spanning the centuries, and it’s well worth a visit.

In the 19th century the castle was significantly extended by William Burn, including a low range of buildings to the rear which housed the kitchens, and is now home to the tearoom and shop.

High on the west wall of the main tower is a small carved shield carrying the date 1567.

After wandering around the grounds for a while we headed back to the car and continued east, but again not for long, stopping at the far end of Forres to visit Sueno’s Stone.

Sueno’s Stone is the tallest of all the Pictish stones in Scotland, being some 6.5 metres tall. The face of it is carved with a tall cross decorated with intricate knotwork, below which is a carved panel showing bearded figures.

The knotwork is fantastically ornate, and well-preserved considering it was carved in the 9th or 10th centuries.

The sides of the stone slab are also carved with interlacing knotwork.

On the rear of the slab are dozens of carved figures, possibly representing a battle scene or procession of some kind.

It really is an awesome spectacle, and is considered to be one of the best examples of early sculpture in Britain.

Next we retraced our route back along the A96 towards Nairn. It was quite a surreal journey, as we drove through a sandstorm – not something you’d necessarily expect in Scotland! – and could see mini-tornadoes crossing the fields on either side of the road.

We were heading for Auldearn motte, all that is left of the Old Castle of Eren, built in the 12th century.

In a field below the motte were a pair of Shetland ponies enjoying the sun. 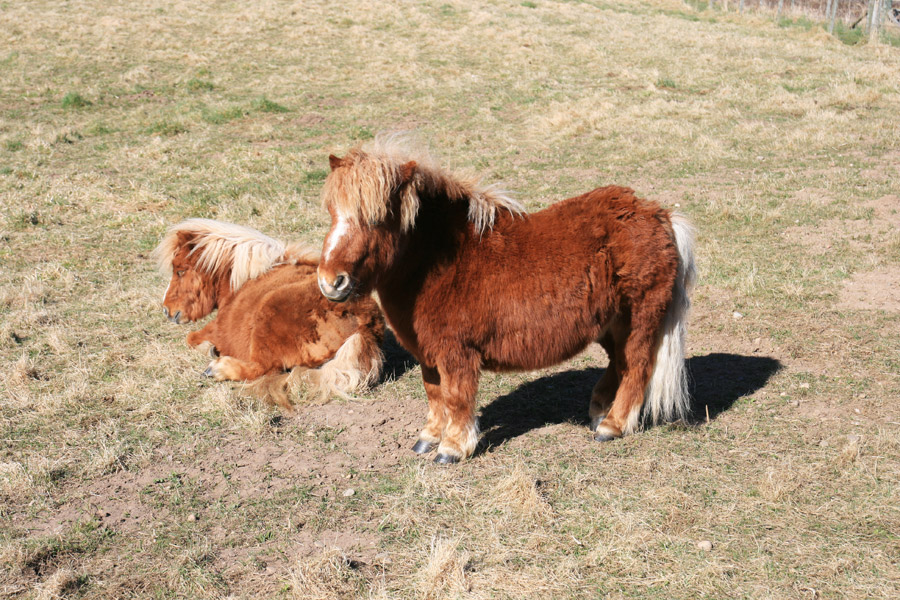 Standing in the middle of the motte is the Boath doocot, 17th century in date and presumably associated with the nearby Boath House.

From the top of the motte you can see for miles, so you can understand why the site was chosen for a castle. To the right of the picture below you can just see a sandstorm blowing across the fields. 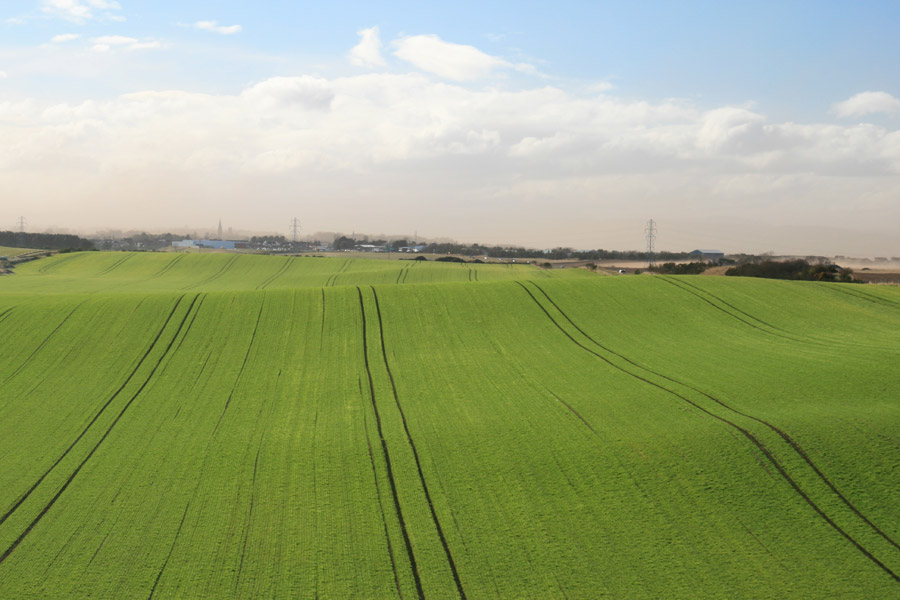 After a somewhat stop-start journey so far, one that was actually taking is further away from home, we finally headed south and for a more considerable distance before our next stop.

Ardclach Bell Tower is a tiny castle standing high on a small hill above the River Findhorn.

The tower was adapted in the 18th century with the addition of a bell, and used to call people to Ardclach Old Parish Church at the bottom of the hill.

The first floor room is slightly more luxurious, having a couple of small windows and a fireplace, above which are the initials “MGB” for Margaret Grant Brodie, the wife of the builder Alexander Brodie of Lethen.

The first floor is reached by a narrow stone staircase leading straight up from the front door.

The tower seems very isolated, high on a hill down this remote glen. But that is presumably what Brodie required, perhaps keeping out of the potential troubles found in more populated areas.

Time was marching on by now, so we pressed on and put some miles on the clock, stopping briefly in Grantown-on-Spey, then for dinner at the always wonderful Auld Smiddy Inn in Pitlochry, before finally getting back to Edinburgh late.

What a great weekend that was!