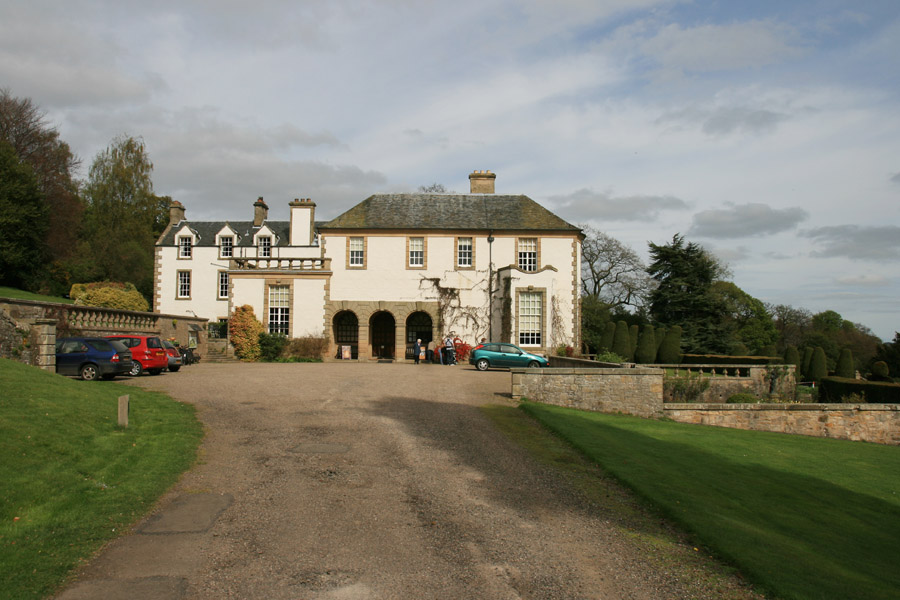 We drove over to Fife today to visit a pair of properties just to the west of Ceres.

Hill of Tarvit is a mansion house which was originally built to a design by Sir William Bruce in the late 17th century, when it was owned by the Wemyss family and became known as Wemyss House.

In 1903 the Wemyss family sold their estates in the area to a Dundee jute magnate by the name of Frederick Bower Sharp, who commissioned Sir Robert Lorimer to rebuild the house, by then known as Wemyss Hall.

Lorimer’s work was carried out between 1905 and 1906, modernising the old house and creating a new west entrance, and the new house was named Hill of Tarvit.

Photographs aren’t allowed inside Hill of Tarvit, so you’ll have to use your imagination. Or the RCAHMS. Or Wikipedia. The interiors show off Lorimer’s designs, as well as the art, furniture and porcelain that Sharp collected.

Hill of Tarvit is set within beautiful landscaped gardens, and a focal point for the symmetry of them seems to be a sundial on the south wall of the house.

As interesting as Hill of Tarvit is, the real reason we were here was to visit Scotstarvit Tower, a castle across the road from the more modern house. It’s an unstaffed property, but the key can be obtained from Hill of Tarvit, and you can explore it at your leisure.

Although it has a relatively small footprint, Scotstarvit Tower rises to a height of six storeys.

The first four floors consist of two double height barrel vaulted chambers, each of which would have been split into two by a wooden floor. The lower of these two chambers has been left open, the corbels on the wall showing where the upper floor level would have been.

The upper barrel vaulted chamber has had a new floor installed to show what the rooms would have looked like originally.

Above these four floors is a fifth floor, with a garret level under the roof, again with no floor between them currently.

From here the spiral staircase continues up to the parapet walk, exiting through a circular caphouse with a conical roof.

Above the door on the caphouse is a carved armorial panel, bearing the date 1627, and the arms and initials of the tower’s most famous resident, Sir John Scot.

Sir John was a Director of Chancery, and later a Lord of Session, but is best known for his wonderfully-titled book “The Staggering State of Scottish Statesman between 1550 and 1650” and his contribution to the publication of maps of Scotland.

Both Hill of Tarvit and Scotstarvit Tower were left to the National Trust for Scotland by F.B. Sharp’s daughter, and both can now be enjoyed by all.