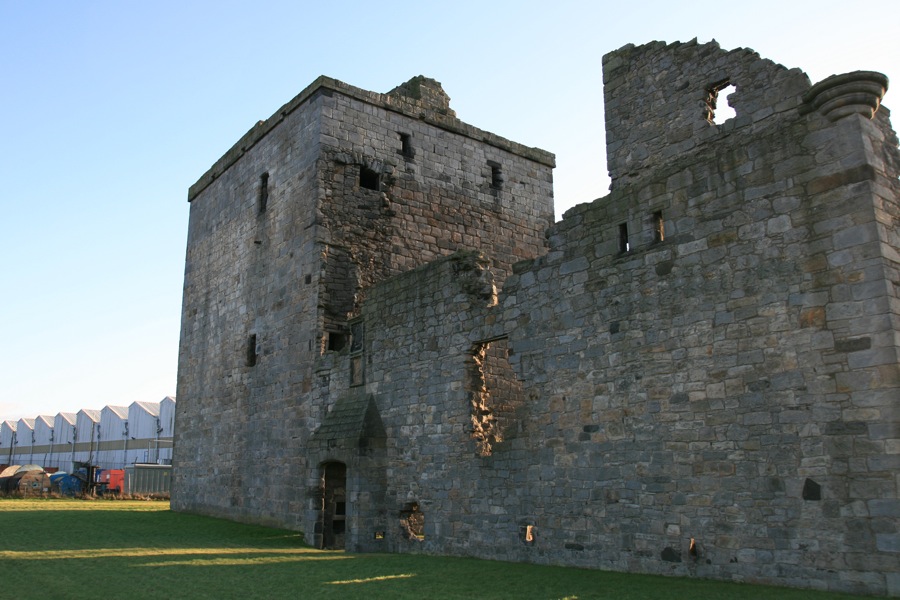 Friendly and unfriendly castles in Fife

We partly retraced last week’s steps today, heading over into Fife in search of more castles.

Once again the sun was low in the sky and shining brightly, and when we arrived at Rosyth Castle the sun was directly behind it, making it difficult to photograph straight on.

The sun was the least of our worries however. As we were wandering around in front of the castle we noticed a sign saying “No Trespassing”, so being a law-abiding citizen I went to a nearby Portakabin at the entrance to the Port of Rosyth, and asked the lone security guard if it would be ok to take some pictures of the castle.

The answer was a resolute “No”, apparently due to “security reasons” connected with the port. I thought he was joking at first, but he was serious. This is the first time I’ve ever been refused permission to take photos of a castle. A castle which is right on the perimeter of the port site, with no high fences keeping out undesirables, and seemingly nothing of any interest or sensitivity anywhere nearby.

I’m sure Forth Ports will be delighted to know they have such dedicated staff protecting their top secret property. Staff who are so on the ball they didn’t notice us arrive, park the car, and walk around such a sensitive site taking photos for a good 5 minutes (before noticing the sign), and continued to be completely unaware of our presence until I knocked on his door.

So away we went, moving uphill slightly for a more distant view of the castle.

Although a ruin, Rosyth Castle is a substantial one, with the main 15th century tower still standing to its full height. There are plenty of architectural details to be seen too, including interesting window surrounds, presumably a later Renaissance addition, and space for armorial panels above a entrance into the courtyard.

The hill which was serving as our vantage point is home to the castle’s doocot. Also built in the 16th century, it has crow-stepped gables, a stone roof, a barrel-vaulted ceiling and an interesting snake motif carved over the entrance.

Interestingly Rosyth Castle used to be completely surrounded by water, standing on a rocky island in the Forth. It wasn’t until some time after the Admiralty bought the coastline here in 1903 and began a land reclamation project that the castle became landlocked. I have yet to ascertain whether the doocot was also on the island, or isolated from the castle on the shore.

From our slightly raised position there was a great view of the bridges, with the Forth Road Bridge in the foreground and the iconic red Forth Bridge behind it. 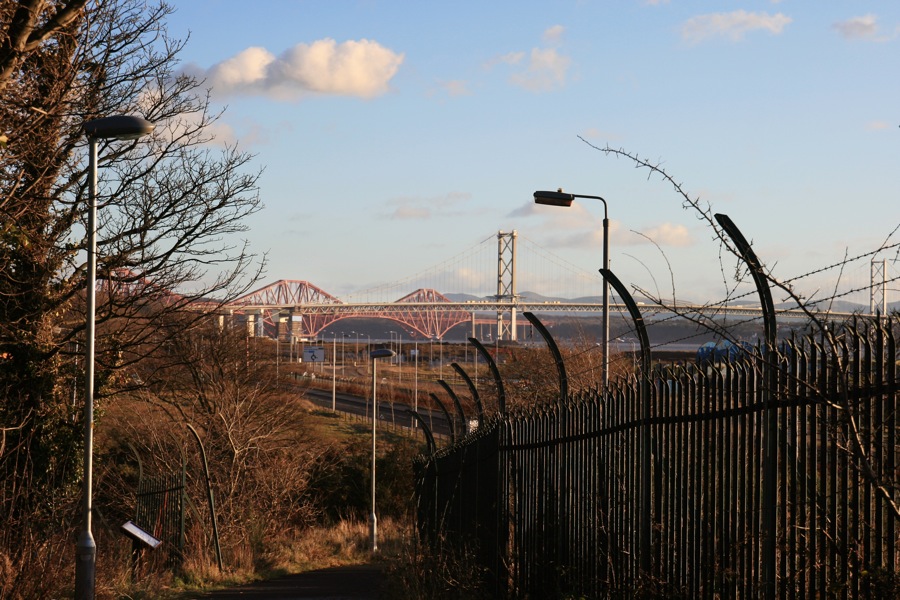 We continued north-west from here, deeper into Fife, and to the village of Crossford. On the edge of the village is Dunfermline Golf Club, whose clubhouse is the rather magnificent Pitfirrane Castle.

In stark contrast to our experience at Rosyth Castle, upon asking permission at the Club shop we were told to feel free to wander around taking photos.

Consisting of a 15th century tower which was extended upwards and outwards in 1583, the later main entrance was on the west side, next to which an old “yett”, or iron gate, has been mounted, thought to date from 1583.

Above the doorway is a carved coat of arms for the Halkett family, the former owners of Pitfirrane Castle, with the mottos “Fides sufficit” and “Honeste vivo” (Faith is sufficient, I live by my honour).

In the 19th century further additions were made to the castle, and in the 20th century a rather unsympathetic extension was built, now housing the clubhouse’s bar.

While it may not be in keeping with the rest of the castle’s style, the large windows on the bar give its occupants great views out over the golf course, with the added interest of a 16th century sundial in the foreground.

Above the bar’s roof, in the re-entrant angle between the old 15th century tower and the 16th century staircase wing (and presumably above the original 16th century entrance), are two further carved armorial panels.

The upper panel appears to be the arms of Scotland, while the lower combines the Halkett and Hepburn coats of arms, with the initials GH and IH, commemorating the marriage of George Halkett to Isabel Hepburn in 1576.

Looking at the east side of the castle reveals a mix of styles from various centuries, showing how the building developed over the years.

While on the north side, the low 19th century additions are clearly distinct from the main 15th and 16th century block to which they’re attached.

After a slightly disappointing start at Rosyth Castle, the day finished on a high note with the golden walls and warm welcome at Pitfirrane Castle.