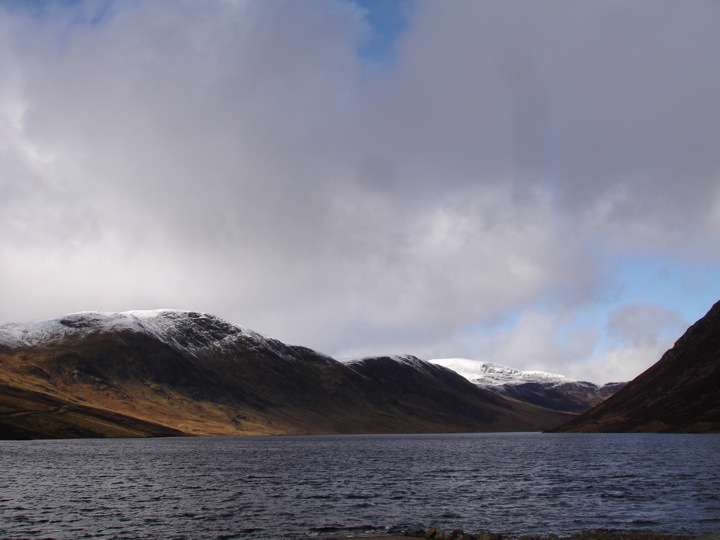 Four seasons in one day in Glen Turret

The BBC‘s weather forecast yesterday was predicting clear skies today, while the Mountain Weather Information Service this morning suggested clear skies before lunch, with a chance of snow showers in the southern central Highlands this afternoon.

I set off via Stirling to Crieff, then twisted my way around the edge of Macrosty Park and out to the Glenturret Distillery, where I turned onto the steep road up to the dam at the end of Loch Turret. There were several other cars in the car park, and as I set off along the rough track on the east side of the loch I passed a few folk walking their dogs in the other direction.

The weather was glorious, with bright blue skies and fluffy white clouds, although it was looking a bit darker at the far end of the loch.

For the first few miles the route follows a rough vehicle track along the edge of the loch, with Ben Chonzie visible for most of the time, although it’s snowy peak was disappearing in and out of cloud as I made my way along the path. 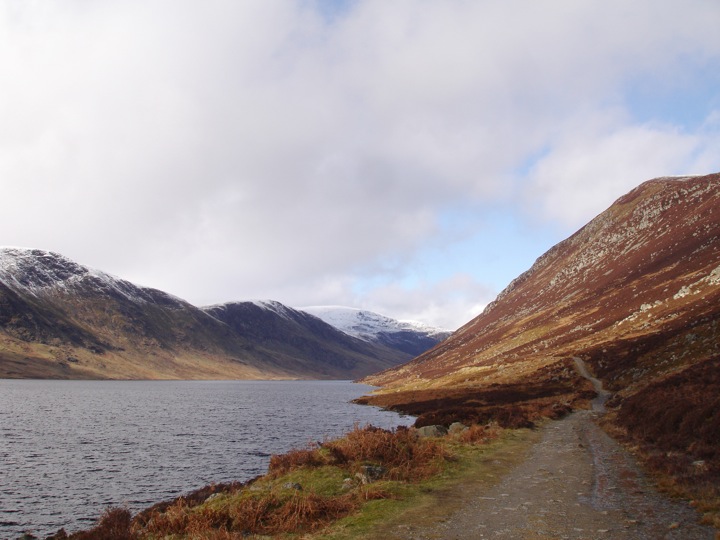 Several burns cross the track – none of them particularly deep in spite of the melting snow – before tumbling their way down to the loch in a series of small waterfalls.

At the end of the loch the track starts to rise gradually as it approaches the headwall of the glen, offering good views back along the loch.

Where the Turret Burn flows into Loch Turret there are several prominent glacial moraine deposits, which today were being picked out by the low winter sun. 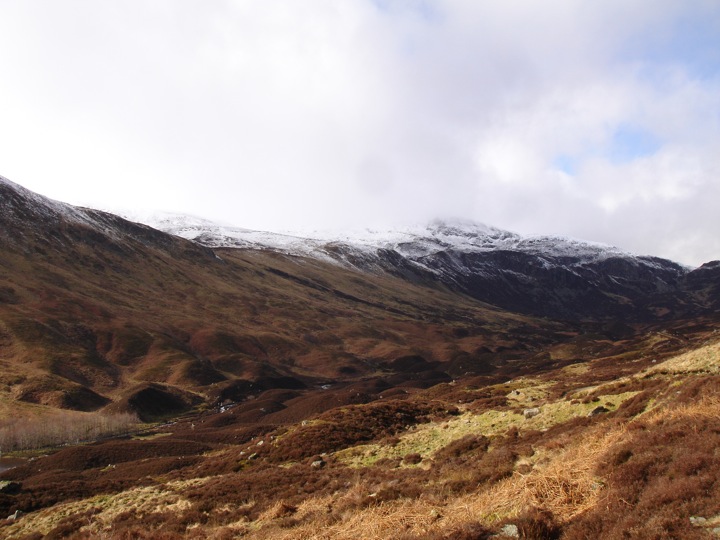 Around this point the sun retreated behind the clouds and cold rain started to fall as I left the track and squidged my way up the boggy slopes to the west of Lochan Uaine. When I had been here in October last year the weather was glorious but it was still very marshy at the bottom of the headwall, so rather than take that route I decided to go via Biorach a’ Mheannain again.

The rain didn’t last for long, and as I made my way around the edge of the hill dozens of mountain hare – resplendent in their white winter coats – were running about the hillside, keeping their distance from me, but getting close enough for me to take a few photos.

The further around Biorach a’ Mheannain I went, the more snow there was – unsurprising as I was moving north. Once past the rocky crags on the east side, I started to scramble up the hillside virtually on all fours due to the steepness and the slippy snow. It was worth it for the views, although the colour of the sky was changing quite significantly the higher I climbed.

Just a short time later the cloud had lifted again and I was at the summit of Biorach a’ Mheannain looking at a magnificent view of Loch Turret, framed by the snow-capped hills that form Glen Turret. 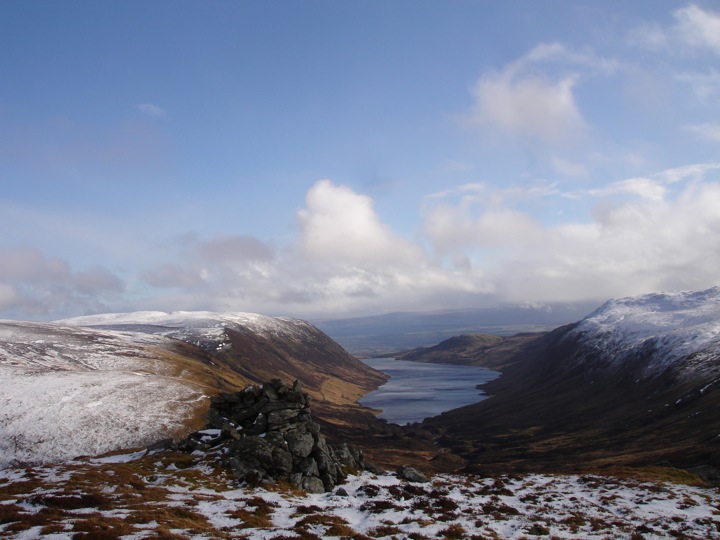 The view over to Ben Chonzie was also good, nice and clear and with no hint of what was about to come.

I stopped on Biorach a’ Mheannain for some lunch before tackling the neighbouring peak, since the weather and view were so good. Just as I perched myself on a rocky outcrop a blizzard blew in from Ben Chonzie – it must have been approaching just behind the summit as it seemed to come from nowhere. I decided to try and sit it out since I was sheltered from the worst of it by the rocks, but half an hour later it had only got worse.

Unfortunately I had left my waterproof trousers in the car by mistake, and within seconds of emerging from my lunchtime bolt-hole my trousers were wet through and my legs freezing. So with regret I thought it better to head back down rather than to continue to the summit of Ben Chonzie, still a considerable walk away. Rather than return via the steep slope I had climbed up, I walked a few hundred metres north before starting to descend to the east. The view north towards Glen Almond was quite a contrast, with a hint of blue sky visible above the snow and clouds. 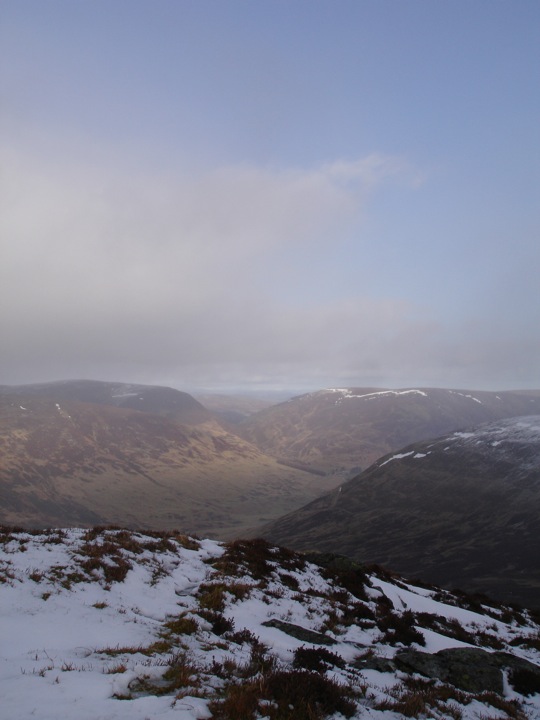 It was a lot less steep going this way, and after scaring a few more hares I was soon squelching my way down the boggy section at the head of the glen to get back to the relative dryness of the track, which would take me back to the car.