Despite having been in the Borders last weekend, we headed back down there again today. This time we were heading for the Marchmont Estate, which we didn’t have time to visit last week.

Built between 1750 and 1754, Marchmont House was commissioned by Hugh Hume-Campbell, the 3rd Earl of Marchmont, and designed by the architect Thomas Gibson.

The 3rd Earl’s father, Alexander Hume-Campbell, the 2nd Earl of Marchmont, had commissioned William Adam to design a new house in 1724, and make improvements to their previous home, Redbraes Castle.

But the Earl decided against the new house due to the expense, and only went ahead with remodelling Redbraes and improving the surrounding lands. Whether this was to the designs of Adam or someone else is unknown.

As part of those landscaping improvements, in 1726 he began planting the Great Avenue with 10,000 Dutch elm trees. Stretching some 1.3 miles (2.1km), it is thought to be the longest avenue in Scotland. The photo below is taken from the centre of the estate, with Marchmont House behind and the Great Avenue disappearing over the horizon.

Turning around, this is the view back to the house.

At the end of the Great Avenue, acting as a distant focal point for the house, is a doocot, built in 1749, and possibly designed by William Adam.

We drove back through the estate, to have a look at the ruins of Redbraes Castle. On our way we had to deal with a pedestrian crossing our path. 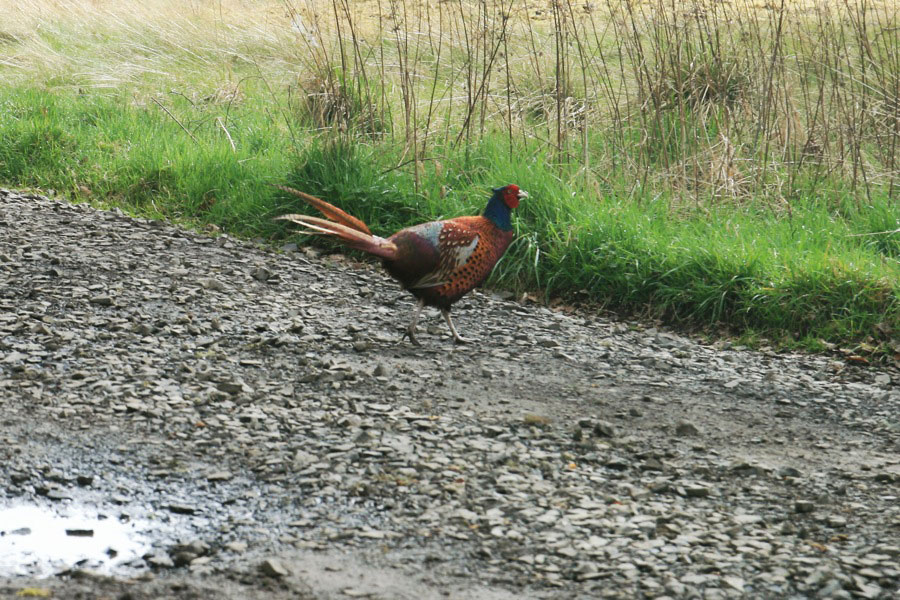 Not much is left of Redbraes Castle, just a section of wall standing to first floor height, and fragments of the returning walls.

What’s left doesn’t really hint at the scale and grandeur of what went before, but I suppose when you look at Marchmont House it shouldn’t come as a surprise.

It was home to the Humes of Polwarth from probably the mid-16th century until Marchmont House was completed in 1754. Prior to that they lived at Polwarth Castle, and possibly also at another property called Mains House.

We left the estate the same way that we had come in, through woodland on the way to Greenlaw.

At the very east end of Greenlaw is the site of Tenandry House, a castle which probably dated back to at least the 15th century. Nothing of it now remains, but it once stood on a ridge next to The Moat caravan park.

A few miles from Greenlaw are the ruins of Old Thirlestane Castle, of which there is a bit much more to see than the previous two castles.

The majority of the ruins consist of the south wall, inside which a number of interior features can be seen, including what looks like the remains of a spiral staircase down to the basement.

On the other side of the wall is a stair tower, which gave access to the upper floors.

In the west wall of the stair tower is what appears to be a blocked up doorway.

Traces of the other walls can be seen as raised mounds in the ground extending to the north. To the north-west of the castle are a series of lumps and bumps which clearly define other buildings.

One of these banks extends west from the north corner of the castle, and then returns to the south-west enclosing a rectangular building in the north-west corner. It looks like it may well be a courtyard wall, with an ancillary building butted up against the inside of it.

The clouds had been looking heavy all afternoon, so we headed back across the fields to the car before the rain they’d been threatening started to fall.