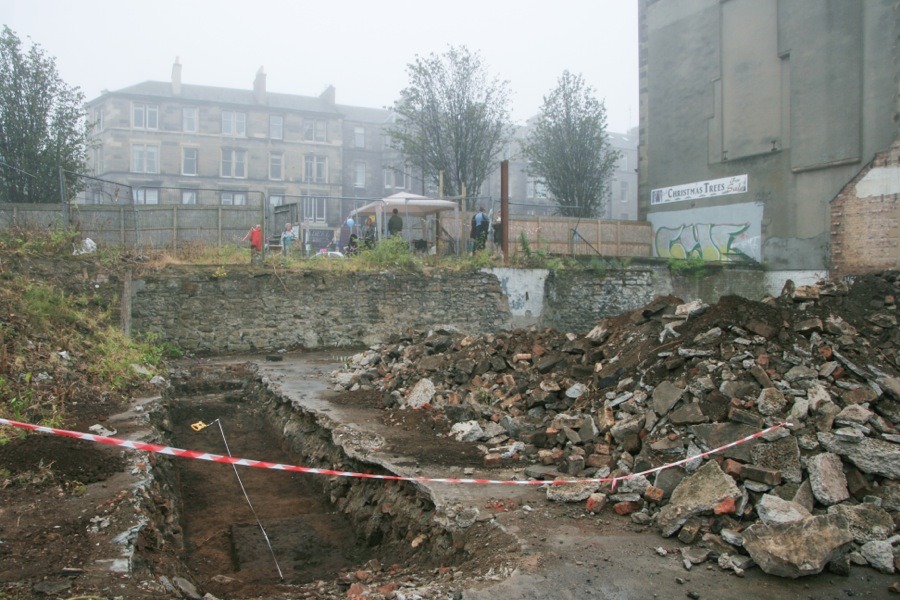 Despite being past the middle of July we woke up to a thick fog today. Normally we can see Edinburgh Castle looming at the end of our street, but today we couldn’t see that far.

Just around the corner from us, at Haddington Place on Leith Walk, is a gap site which is currently being excavated by Addyman Archaeology on behalf of S Harrison Developments. While at first glance the site might not appear to be much it is in fact the location of an early botanic garden in Edinburgh.

The first botanic garden was actually established in 1670 at St. Anne’s Yard, near Holyroodhouse, but it was moved to Leith Walk in 1763 to escape the pollution of the city.

Today there was an open day, with archaeological finds on display and tours conducted by one of the archaeologists. We arrived just as one tour was starting so made our way down into the site. While the focus of the investigation is the site of the old Botanic Cottage, formerly the gardener’s cottage, several test trenches have been sunk across the site to investigate what remains of the gardens themselves.

Several interesting finds have been uncovered, as well as considerable amounts of the original topsoil containing broken flower pots.

One feature that the archaeologists were particularly excited by was the remains of an old well, thought to be contemporary with the gardens, which was represented in the ground by a sandy circle. It was later found to be lined with bricks.

The level of Leith Walk has been artificially raised which means that the garden is in what is now considered to be in the basement level of the street. The original entrance into the gardens can still be seen in the photo below, partly covered with later plasterwork. As the archaeologist said to us it’s fascinating to think of the number of important figures of the Enlightenment who must have passed through this entrance.

Just to the south-west of the entrance was the Botanic Cottage. It has been removed, stone by stone, with plans to re-erect it within the “new” Royal Botanic Gardens at Inverleith and the footings of it are now being investigated by the archaeologists.

As Edinburgh expanded towards Leith the decision was taken to move the gardens again, and in 1820 the botanic gardens were relocated to their current site at Inverleith. Most of the gardens ended up being built upon, although the last green remnants of the old gardens still exist as a small garden on Hopetoun Crescent, behind the dig site.