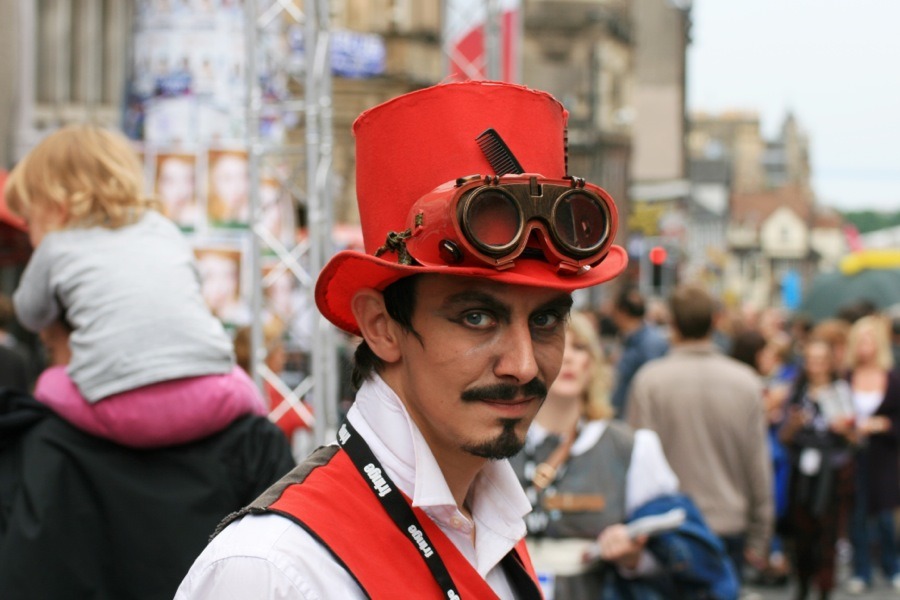 This weekend is the last weekend of the Edinburgh Festival Fringe, and the third weekend on the trot for us after last weekend and the weekend before.

We set off to once again run the gauntlet of the performers handing out their flyers on the Royal Mile. The first to catch us was Stuart Freestone from Six Lips Theatre’s production of “Faustus – A New Musical”, dressed as a steampunk incarnation of the Devil’s right-hand-man Mephistopheles.

Further up the Royal Mile we found Pete Dobbing in a kilt balancing precariously up a ladder – no mean feat! 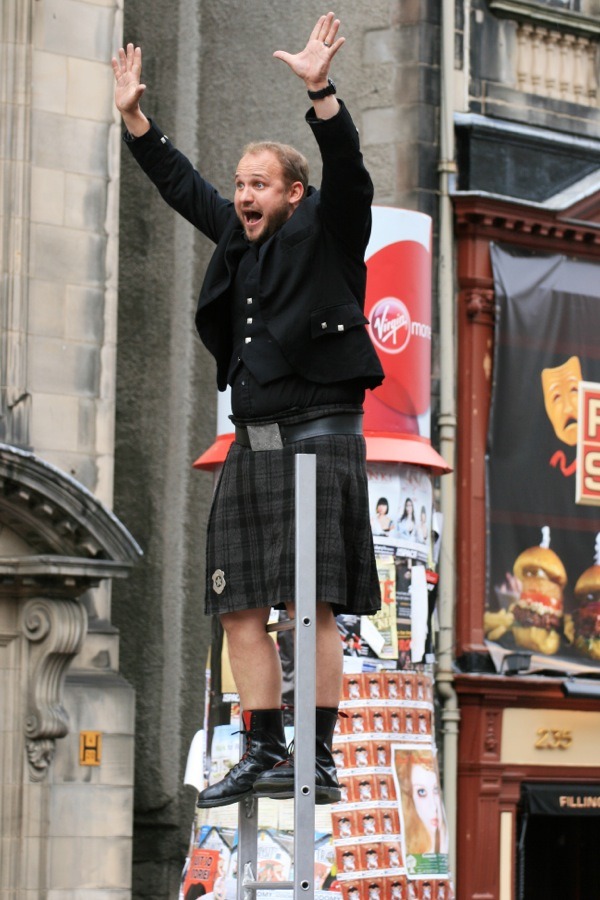 In almost the same location as last weekend were the actors from the Scratchworks Theatre Collective, looking miserable and depressed (for effect, it should be said) until someone took a flyer at which point they lit up. 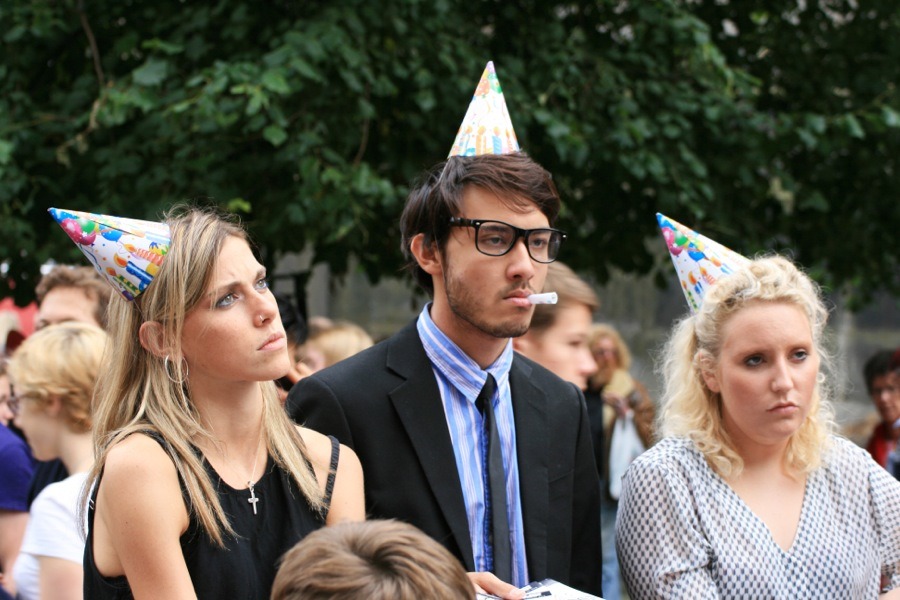 Close to them were three hunchbacked, camouflaged, balaclava-wearing members of the cast from Penn Dixie Productions’ “The Seer” being interviewed.

In the middle of the road beyond St. Giles’ Cathedral were a couple of actors from the Old Hall Theatre Company dressed in Elizabethan costumes to promote their musical “Armada”. 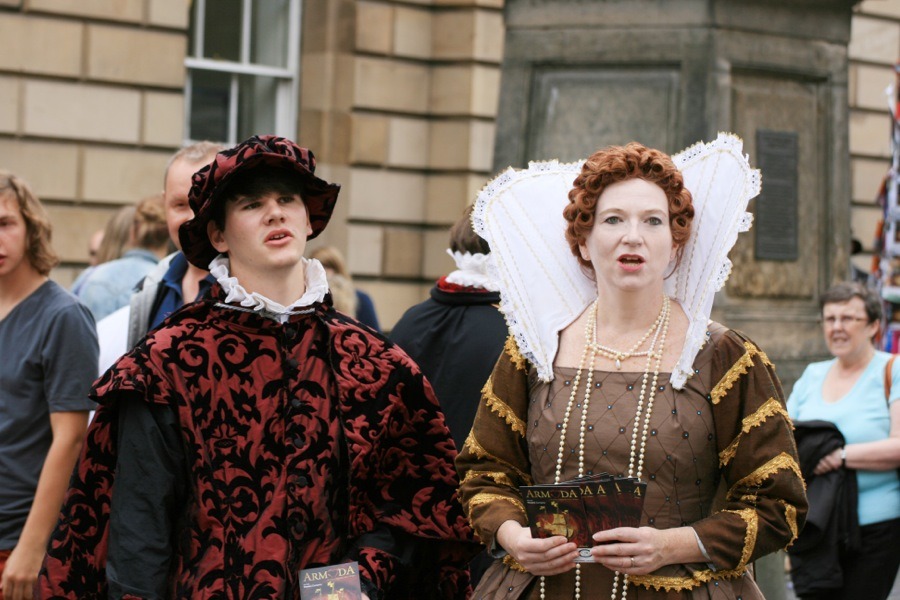 In front of the High Court was a woman dressed as a steampunk, sprayed gold so as to appear like a statue presumably. 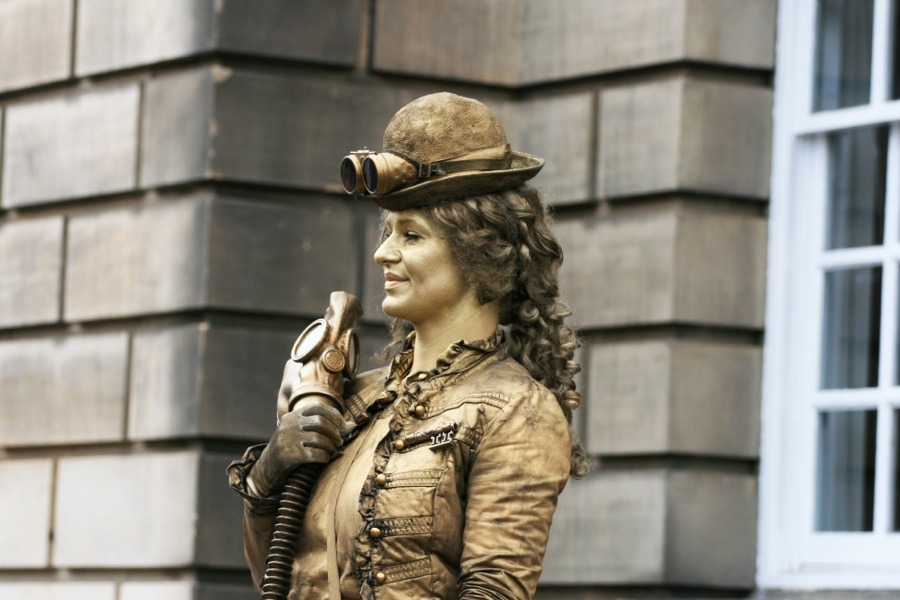 We actually had a non-Festival thing to visit first, as we were heading for the Edinburgh College of Art Masters Degree Show at Evolution House. So we made our way down the ever picturesque Victoria Street to the Grassmarket.

An unexpected bonus of visiting Evolution House was the fantastic views over the Old Town from the upper floors. 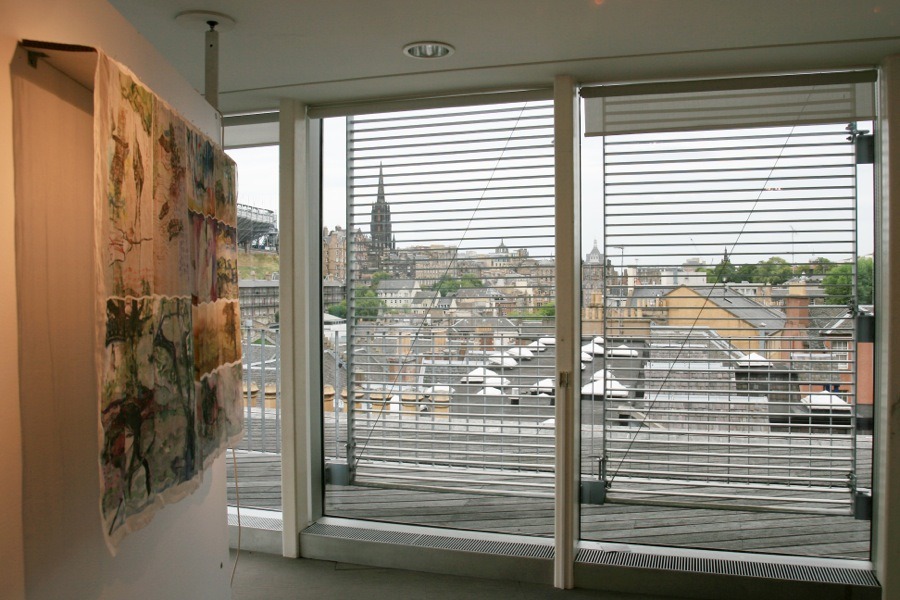 In the Graphic Design section my eye was caught by Pushpi Bagchi‘s “Speaking in Tongues” series of illustrations. 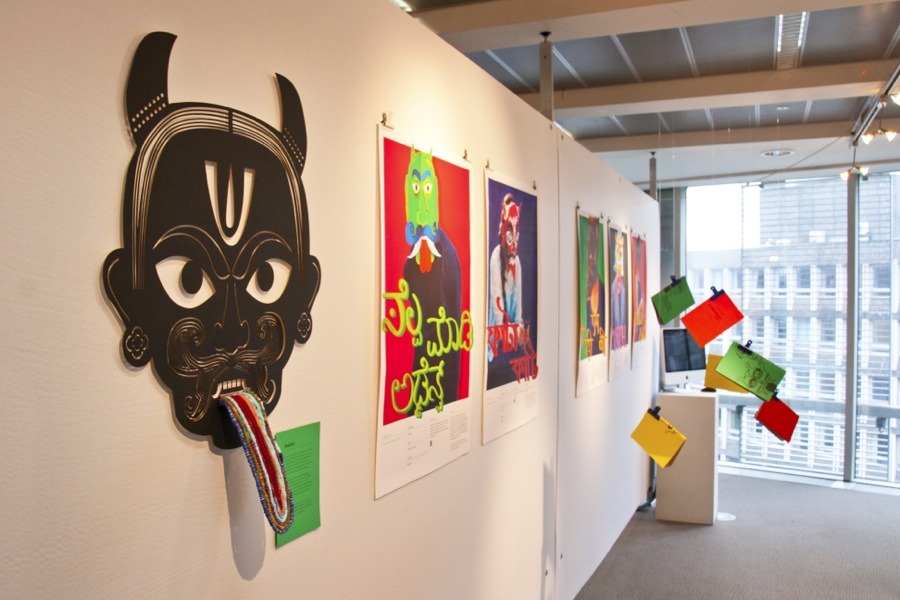 Also interesting was a range of Endangered Animals printed textiles illustrated by Ursula Hunter, featuring animals that are either in danger of extinction in Scotland, or are being reintroduced.

Moving to the Interior Design section we saw Vassiliki Asprogeraka’s proposed conversion of a mill next to a bridge in the Dean Village into an Aquaculture Visitors’ Centre. 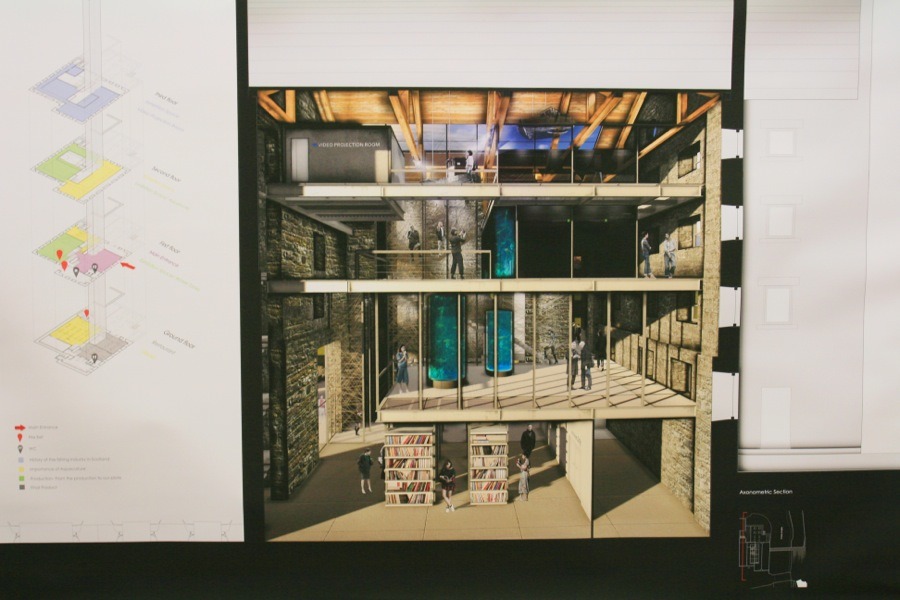 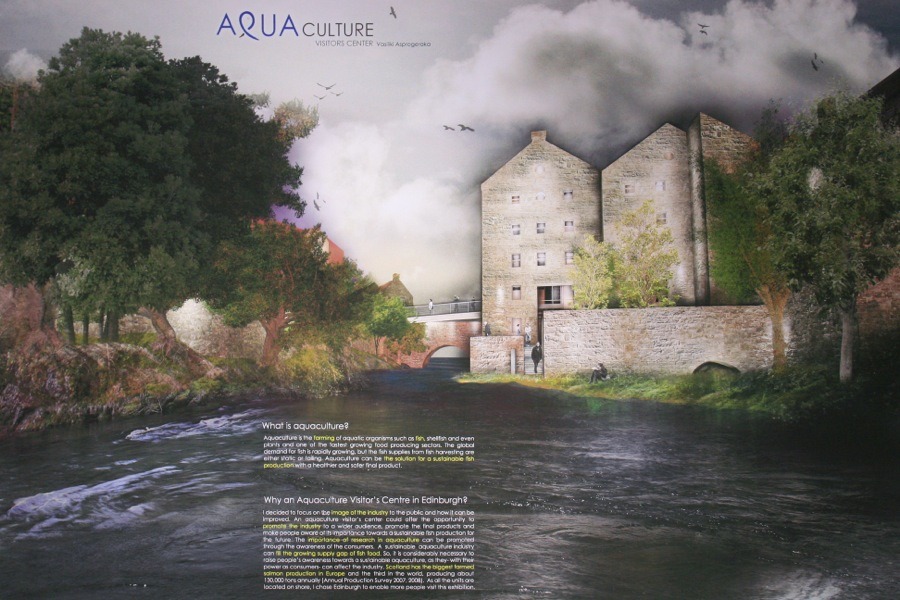 There were also good views from this floor, the brooding sky hanging low over the neighbouring buildings.

The Fashion section featured colourful clothing displayed against the magnificent, and rather grey, backdrop of Edinburgh Castle. 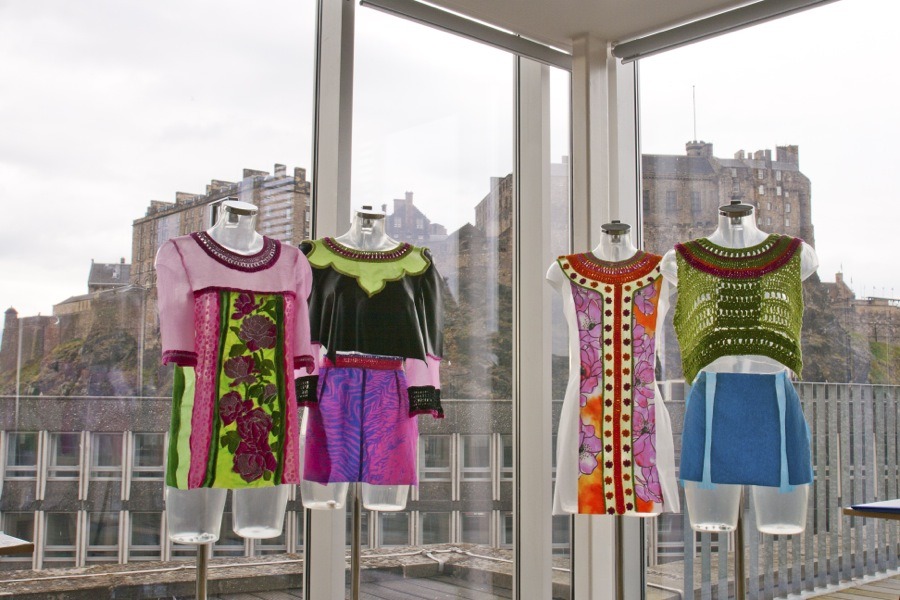 In the Product Design section was Andrew Cosh’s Foresight project, one that I was involved with in the capacity of my day job, offering him some advice on his concept for augmented reality eyewear for use by dental implant surgeons. 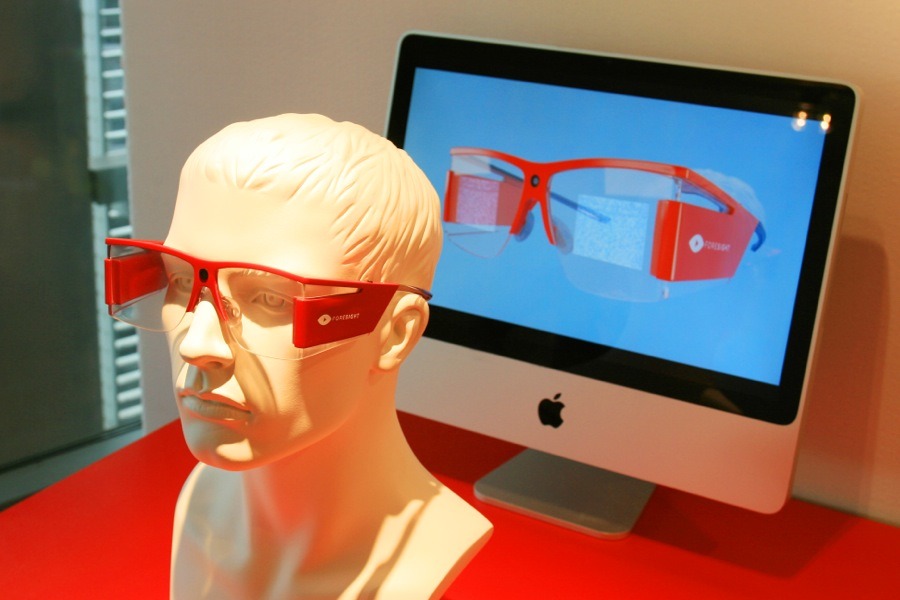 After exploring all three floors of the students’ work we made our way back outside and headed north along Lothian Road, crossing Princes Street on our way to Queen Street. While stopped at traffic lights opposite the end of Rose Street I took this picture, the pennants injecting a splash of colour into an otherwise grey day.

Finally we made our way along Queen Street to The Jam House intending to see the bits of Phill Jupitus’ performance that we’d managed to miss two weekends ago. Once again he didn’t disappoint, and as an added bonus Deborah Frances-White also appeared on stage performing some hilarious poetry imagining how Oscar Wilde and Jane Austen might fare in the sometimes heated world of Twitter. 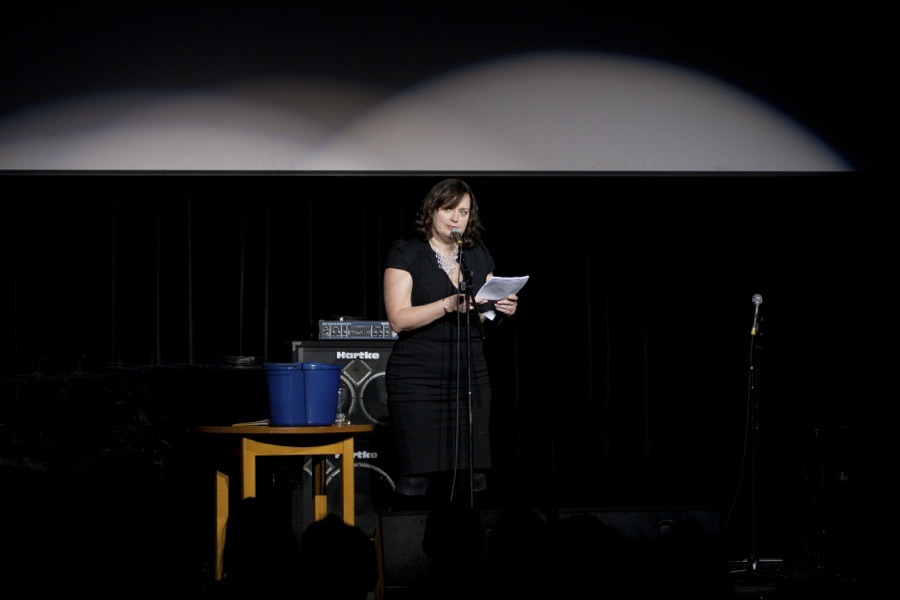 That proved to be our last Fringe show for 2013, however the International Festival and the Art Festival continue through to next weekend, and there is of course the end of Festival fireworks still to look forward to.