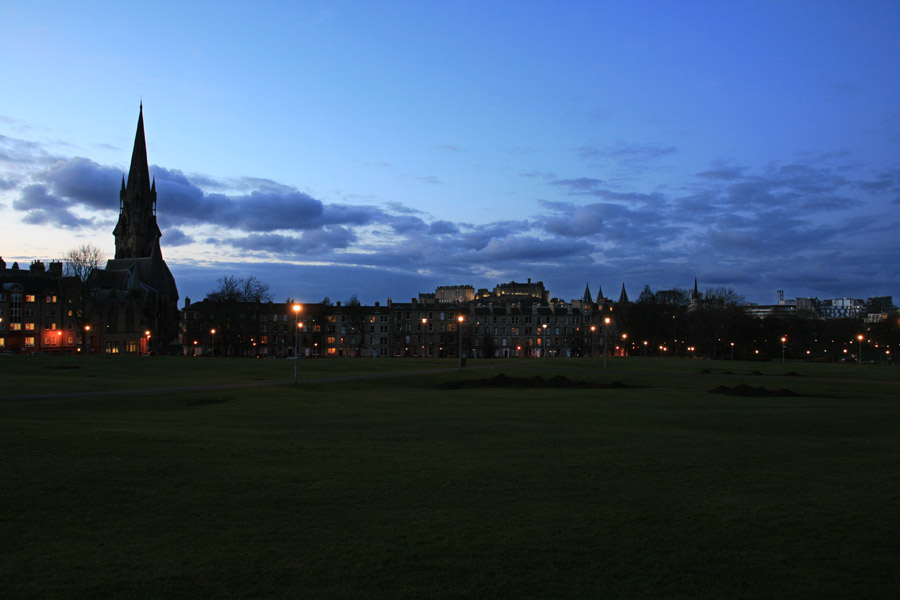 Various factors have conspired to stop us getting out and about over the past few weeks, not least the unseasonal weather which led to a trip north being postponed due to the roads being blocked with snow!

To keep the blog ticking over, I headed into the centre of Edinburgh tonight, braving sub-zero conditions on my bike, to do some nighttime photography. I must admit at this stage that I originally hoped to catch the sun setting behind the Castle from the North Bridge, but I missed it by a matter of minutes.

I cycled up to Marchmont and then across to Bruntsfield, the plan being to work my way down from Bruntsfield Links, taking advantage of its high position and views towards Edinburgh Castle, and onwards to the Meadows.

With the sun having just disappeared over the horizon, it was still casting its rays up into the sky, illuminating the clouds behind the massive spire of Barclay Viewforth Church and the Castle beyond.

With its characteristic green lights shining brightly, I couldn’t not take a picture of The Golf Tavern, one of the oldest pubs in Edinburgh with a history stretching back to 1456. 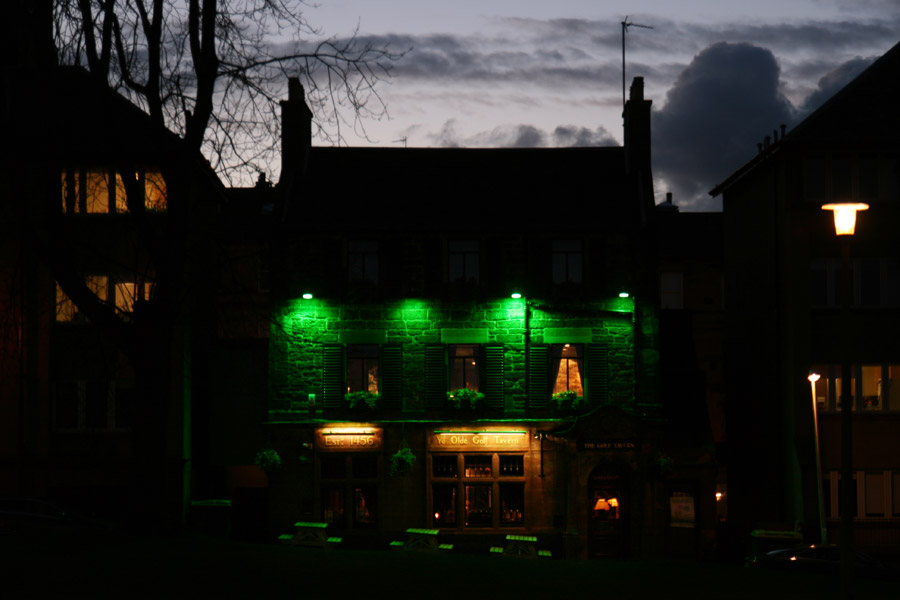 A bit further along Bruntsfield Links I paused to take a photo of Arthur’s Seat‘s iconic peak, looming against the dark sky, its shoulder covered with a dusting of snow.

Continuing along the tree-lined path as it descends towards the Meadows Edinburgh Castle once again comes into view, its bright white lights offering a contrast against the dark skies and the dull orange glow of the streetlights on Melville Drive.

Also illuminated against the darkening sky were the crisp, glass penthouses of the Quartermile development, shining like urban lighthouses.

Crossing Melville Drive I entered The Meadows via the whalebone archway, stopping almost immediately to take a photo of the tree tunnel along Coronation Walk.

From here I took advantage of a closer view of the Quartermile apartments.

I then continued along Jawbone Walk, busy despite the time and the temperature.

Halfway up Middle Meadow Walk I stopped at Quartermile to take a photo of one of the buildings lit up against a deep blue sky.

At the top of Middle Meadow Walk I turned around to look back along the path. I’ve always liked the line of lights stretching off into the distance, it somehow feels very European.

The cold was really starting to bite now, and I was beginning to think of home. However I couldn’t pass the statue of Greyfriar’s Bobby without stopping for a photo. It seems many other people feel the same way, and I duly joined the queue. 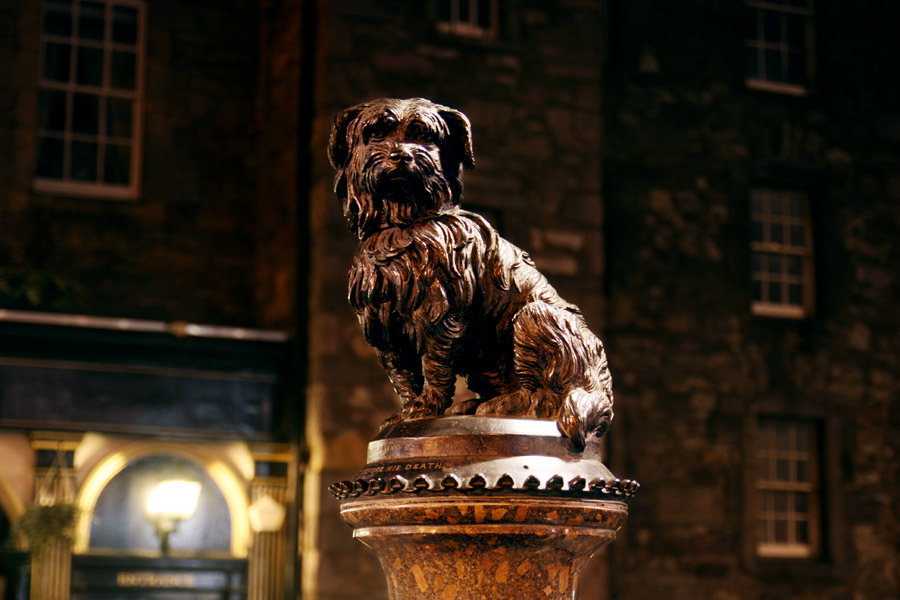 Bobby stands at one end of George IV Bridge, and at the other is the grand monument to money, the headquarters of the Bank of Scotland.

Where George IV Bridge meets the Royal Mile there is no shortage of interesting buildings, but chief amongst them is St. Giles’ Cathedral.

Taking pride of place on the Royal Mile is a sculpture of David Hume, the philosopher, historian and economist who was a key figure of the Scottish Enlightenment. 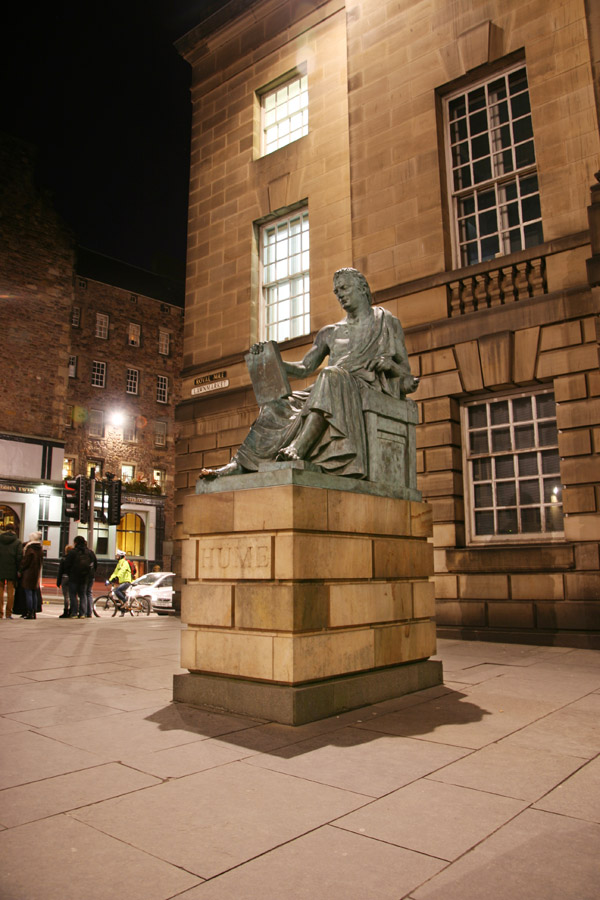 I walked part of the way down the Royal Mile to get a closer shot of St. Giles’ Cathedral’s famous crown steeple, chastising myself for forgetting to bring my zoom lens.

In front of the cathedral in Parliament Square is another statue, this one to the 19th century politician Walter Montagu Douglas Scott, the 5th Duke of Buccleuch and 7th Duke of Queensberry. 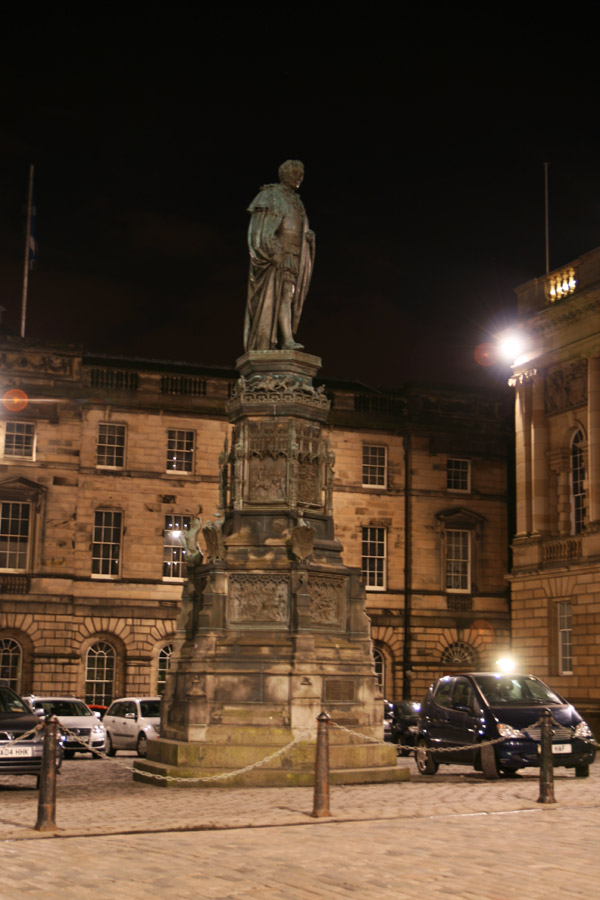 I turned off the Royal Mile onto St. Giles’ Street, which passes around the back of the High Court, where there is a view down to Princes Street from the side of the Bank of Scotland. Again, I could have done with a zoom lens here, and with my fingers becoming increasingly frozen I ended up with a not particularly great photo of Jenners and the Scott Monument.

Heading home was my main thought on the way down The Mound, however with so many grand buildings around actually getting home was going to take a bit longer still. I stopped to take a photo of the Castle and the iconic houses of Ramsay Gardens, but again, warmer fingers and more patience would have been of benefit.

Passing between the Royal Scottish Academy and the Scottish National Gallery, I made my way onto the terrace above East Princes Street Gardens, which has great views back up the Bank of Scotland and across to The Balmoral. 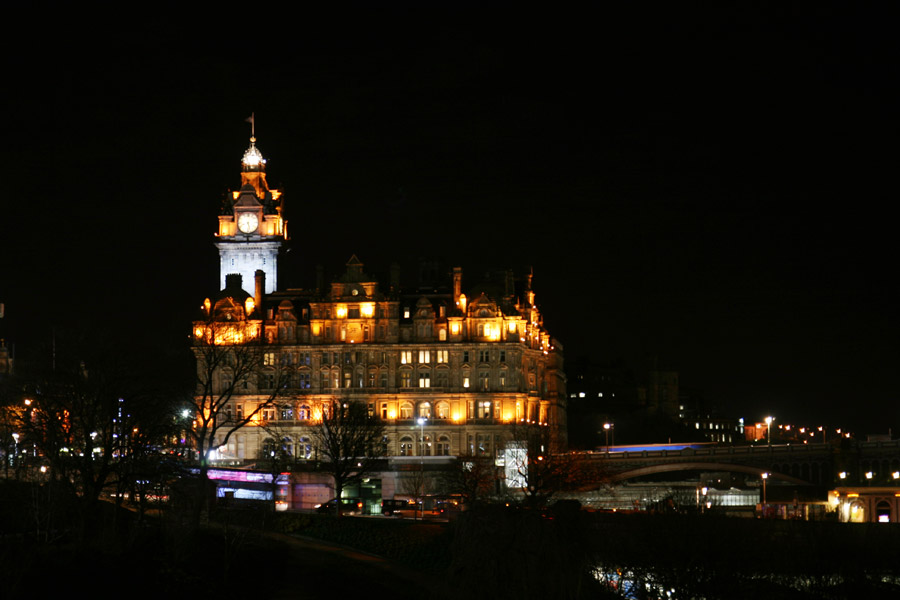 But that was most definitely enough for tonight. I had planned on taking more photos of the Castle from Princes Street, but the warmth of home was the only thing on my mind now, and those photos will have to wait for another day. Or night.