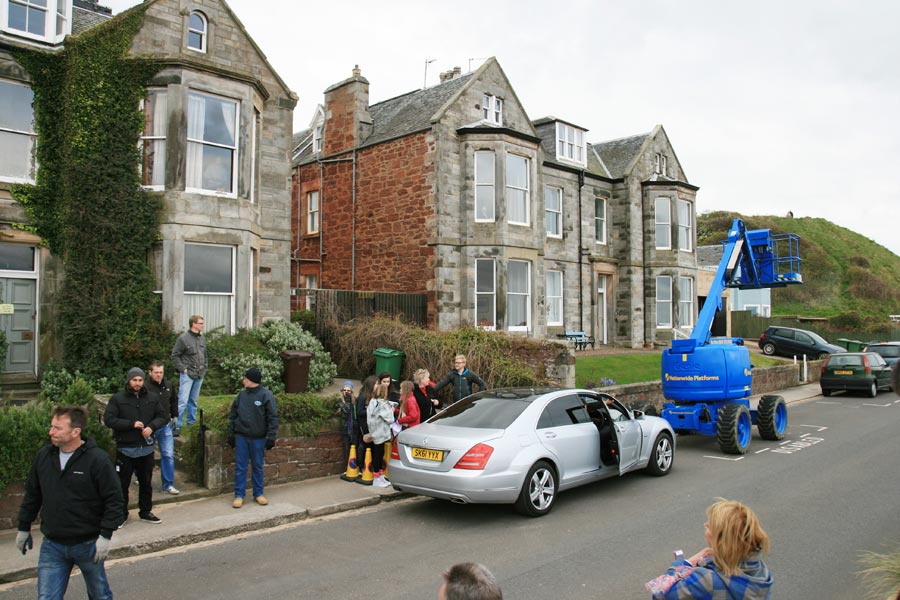 Celebrity-spotting was the name of the game today, as we had seen that Colin Firth and Nicole Kidman would be filming scenes for the upcoming film The Railway Man in North Berwick, and my girlfriend, Yana, was keen to try and see them. So on a grey and blustery day, we set off in hope for East Lothian.

When we got there about we found film crew members going about their business outside the house that was the set, and a handful of onlookers with the same intentions as ourselves.

After we had braved the rather inclement weather for some time, Nicole Kidman came out of the house and got into her chauffeur-driven Mercedes, apparently to make a costume change elsewhere.

After a brief moment of excitement, it was back to watching dogs running on the beach behind us, looking at equipment and sheltering as best we could from the wind and rain.

Nicole Kidman returned a short while later, resplendent in another beige and brown 1940s costume hidden beneath her down jacket, and was whisked off inside. It wasn’t long before she reappeared, off for another costume change.

There was a lot of good-natured banter going on between the fans and the crew, an one of the crew members passed out mint humbugs to the would-be celebrity spotters at one point. The next door neighbours were having fun too, taunting us with a photo of Colin Firth in the window!

It became apparent from talking to one of the crew that Colin Firth wasn’t on set, but would be making an appearance later on. We waited and waited, but still there was no sign of him. Thoroughly cold and wet, we decided to knock the celebrity spotting on the head, and walked back to the car at the end of the promenade.

Driving back towards the set we got stuck in a convoy of chauffeur-driven Mercedes, and it became apparent that we were following Colin Firth. We parked the car at the next car park along and ran back to the set, only to discover that we’d missed him by a matter of seconds!

We decided that it might be worth sticking it out a bit longer after all, and the monotony of standing around was broke temporarily by the reappearance of Nicole Kidman. We were getting a bit blasé about her, this being the fifth time we’d seen her today, but on this occasion she stopped to sign autographs.

One of the security guards told us that filming would most probably finish at 8pm, as that was when they were contracted to, so we hung on a bit longer. Just after 8, to the delight of Yana and the gaggle of teenage girls, Colin Firth emerged from the house.

He was the consummate professional, posing for photographs, signing autographs, and dishing out hugs to his admiring fans.

Finally, the moment Yana had been waiting for, she got to have her photo taken with Colin Firth.