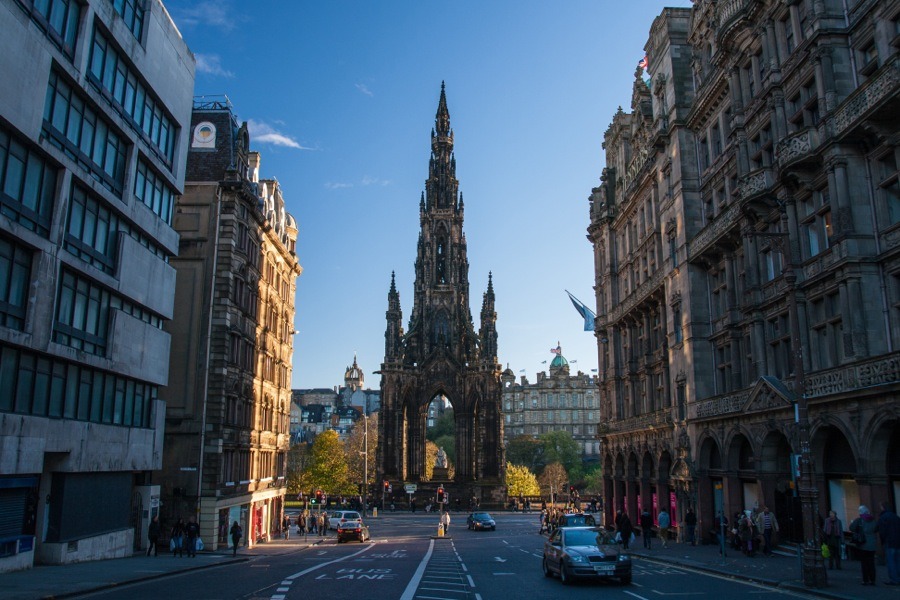 Climbing the Scott Monument in Edinburgh

We’ve been meaning to climb the Scott Monument for some time now but had never got around to it until today. One of the reasons (read “excuses”!) was waiting for the right weather, namely a clear blue sky. That was exactly what we had today, albeit with high winds and cold temperatures. We made our way into town, approaching the monument from St Andrew Square.

The American author Bill Bryson, writing in “Notes From A Small Island”, described the Scott Monument as a “gothic rocket ship” and from this angle you can see why. Built between 1841 and 1844 as a monument to Walter Scott (who died in 1832), it rises an impressive 61.1 metres (200ft and 6 inches) from Princes Street Gardens below.

The entrance is via a small building at the south-west foot of the monument. We paid our entrance fee (a very reasonable £4 per person) and started climbing. A spiral staircase – just wide enough for two people to pass each other – rises within the south-west foot itself to the first of four viewing platforms.

While the views of the city are the main draw to climbing the monument, another consequence of being up so high is the opportunity to see some of the monument’s many carvings and sculptures up close.

But it really is the fantastic views over Edinburgh that make the climb worthwhile, and from this first platform you look out towards Waverley station – named of course after Scott’s celebrated novel of 1814 – and the Old Town behind it.

Looking in the opposite direction there’s a great view across to Jenners.

As well as the views out the way, there are also dramatic views up the way.

Even at this first viewing platform there’s a real sense of height, particularly when looking straight down to Princes Street and the Gardens, where a Field of Remembrance has been laid out by Poppyscotland to honour the servicemen and women who have given their lives over the years.

Being at this height affords the opportunity to have a good look at the magnificent carvings on the upper floors of Jenners. 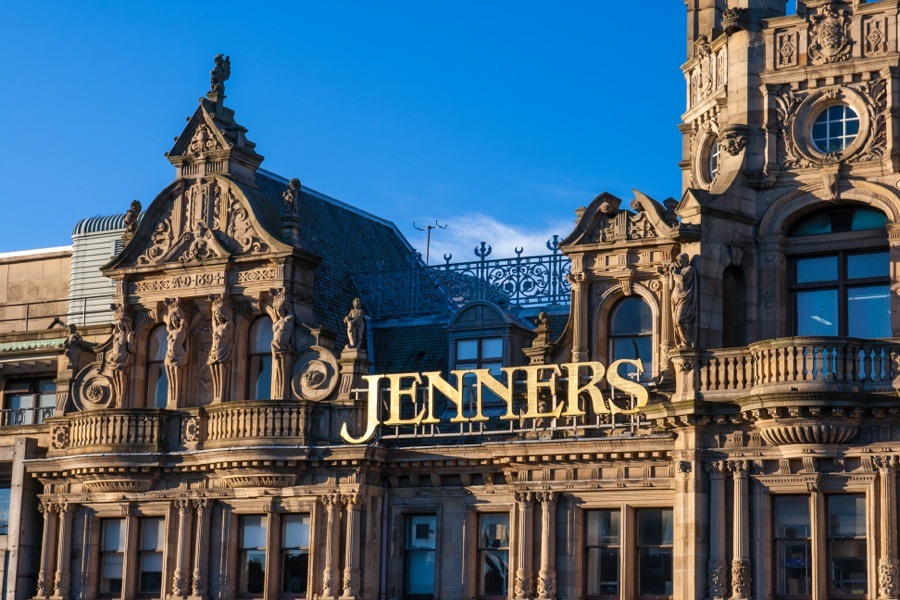 Within the centre of the first gallery is a small museum room lit by stained glass windows, including this one of St. Giles.

Over the doorway is a carved wood panel carrying the Scott family crest with the words “Reparabit comua Phoebe” (“the moon will repair her horns” / “the moon will shine again”) and “Watch Weel” (“watch well” / “look out”).

After our brief respite from the cold we made our way back outside and climbed the next, slightly smaller, spiral staircase up to the second gallery and the next viewing platform. We were perhaps only another 10 metres higher up than previously, but it opened up the views considerably. The light had also changed as the sun continued its descent, flooding the Old Town, Salisbury Crags and Arthur’s Seat in misleadingly warm-looking golden hues.

The extra height was also noticeable when looking down unsurprisingly, and the pedestrians crossing South St. David Street looked tiny.

From this level there is a great rooftop view along South and North St. David Streets with the River Forth and Fife in the background.

Being a bit higher up we could now clearly see all three arches of the North Bridge spanning the chasm between The Balmoral and the Old Town.

The further we climbed the progressively narrower the spiral staircases became, and they were now too narrow for people to pass.

Now at the third level we were getting closer to the top of the monument.

Looking in the other direction the pedestrians were getting ever smaller on Princes Street far below.

The sun at this point had just dipped behind Edinburgh Castle giving us our first proper view of it, as up until this point the castle had merely been a silhouette.

Stretching to the east of the castle is a line of distinctive Old Town buildings (from right to left: the apartments of Ramsay Gardens, the General Assembly Hall of the Church of Scotland, the Outlook Tower of the Camera Obscura, the gothic spire of The Hub and the Bank of Scotland).

There’s a fantastic view west along Princes Street towards the spires of St. Mary’s Cathedral.

Arguably the best view of The Balmoral hotel is from up here. It’s such a big building which dwarfs you when you’re on Princes Street looking up at it, so it felt quite strange to be looking down on it. 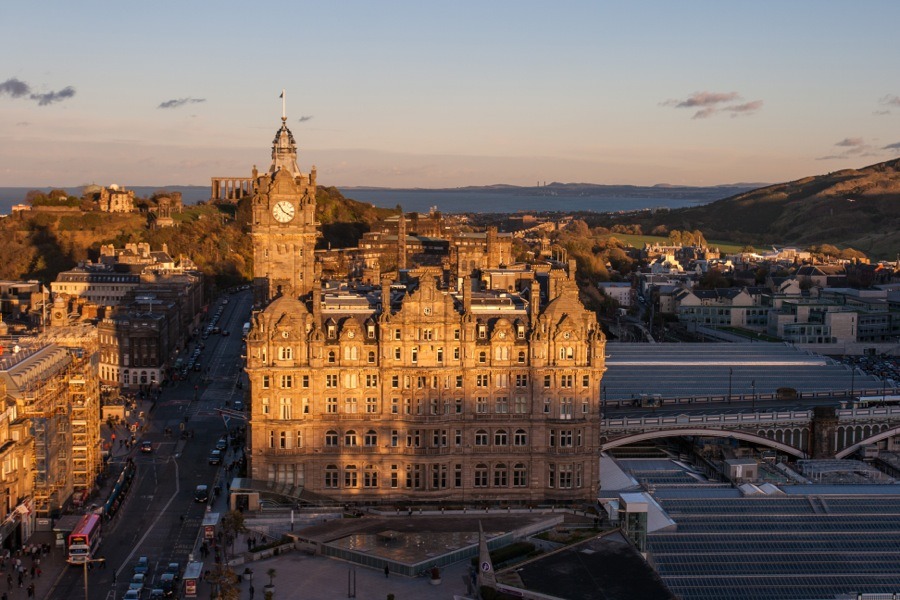 At this height we were more or less level with The Balmoral’s iconic clock tower. 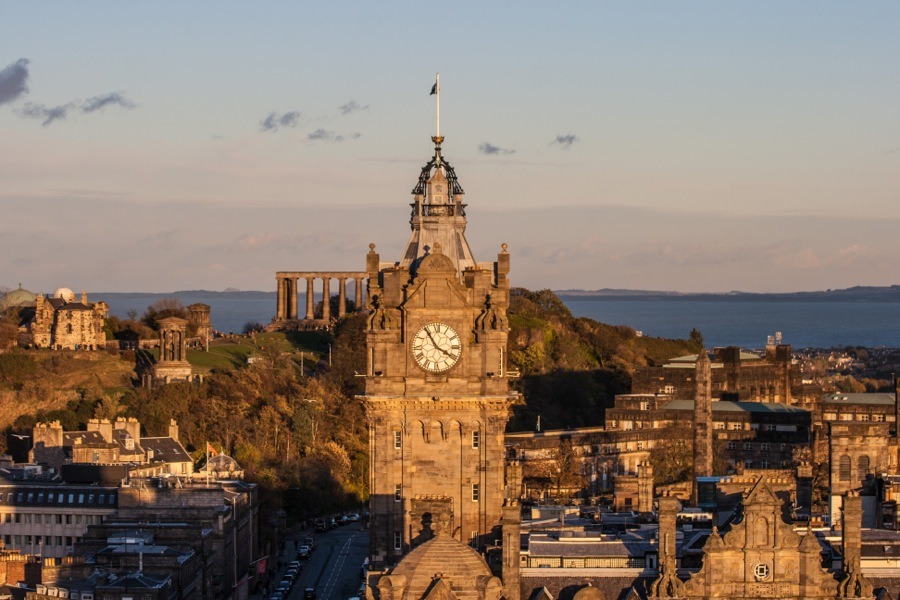 Beyond the clock tower is Calton Hill and its array of buildings and monuments (from left to right: the City Observatory, the Dugald Stewart Monument and the National Monument).

We moved up another level and the spiral staircase became so narrow that we literally had to squeeze out onto the viewing platform. To the south we were level with the glorious crown steeple of St. Giles’ Cathedral.

To the north, rising as a column from St Andrew Square, is the Melville monument surmounted by a sculpture of Henry Dundas, the 1st Viscount Melville.

To the north-west are views from George Street with the tall spire of St Andrew’s and St George’s West Church to the distinctive square tower of St Stephen’s Church in Stockbridge, across the green spaces of Inverleith Park towards Granton with the River Forth beyond, and the backdrop of Fife and even the Ochils visible in the distance.

Slightly further west the tops of the Forth Bridge and Forth Road Bridge can be seen, with more of the Ochils beyond them to the north.

To the south-west are the distinctive white buildings that make up Ramsay Gardens, perched on the edge of the Castle Rock.

To the east of them once again is the Outlook Tower of the Camera Obscura with the Pentlands rising behind.

An announcement was made over a loudspeaker to say that the monument was about to close, so after a quick walk around the platform to drink in the last of the views we started to make our way back down the 287 steps glad that the staircase was getting progressively wider as we neared the bottom.

We stopped for a quick look at the poppies in the Gardens.

Then walked around the monument to take a photo of Walter Scott and The Balmoral clock tower.

The central statue of Walter Scott and his dog Maida is made from white Carrara marble.

Inevitably back on terra firma we looked up to see what we had just climbed.

Our entertainment wasn’t over for today however, so we crossed Waverley Bridge and climbed up the narrow Fleshmarket Close until we reached the Royal Mile where a lone street performer – quite a contrast to the Festival during the summer – was playing with fire. 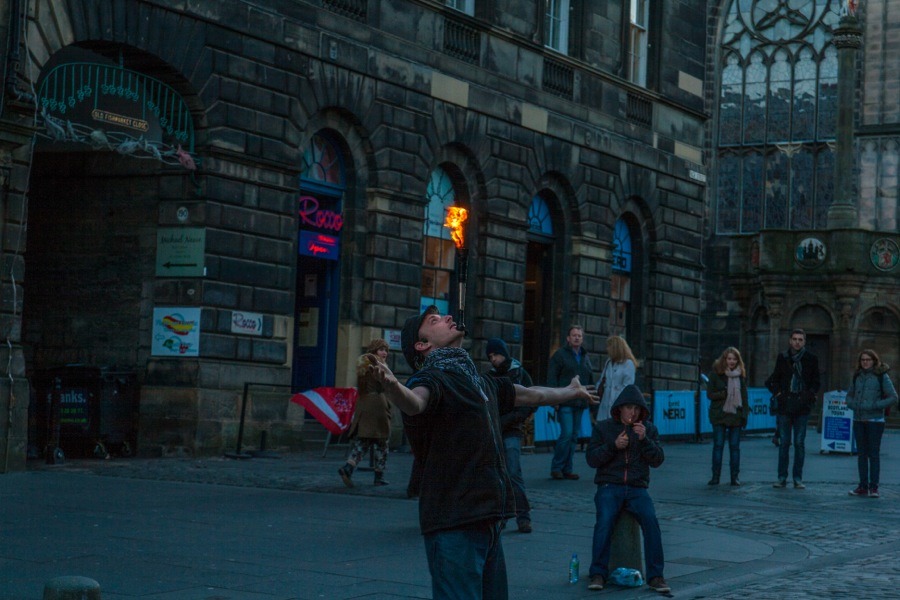 Beyond him St. Giles’ Cathedral was bathed in the warm glow of the setting sun.

We were on our way to the National Museum of Scotland as we wanted to see the the exhibition Kabuki, a collection of Japanese theatre prints. Photography wasn’t allowed in the exhibition room, so here’s a photo I took in the basement.

We then walked across the Meadows and up Bruntsfield Links where the Barclay Viewforth Church was creating a dramatic silhouette against the darkening sky.

We were on our way to the Dominion Cinema in Morningside where we watched Sunshine on Leith which I can highly recommend, along with climbing the Scott Monument of course.