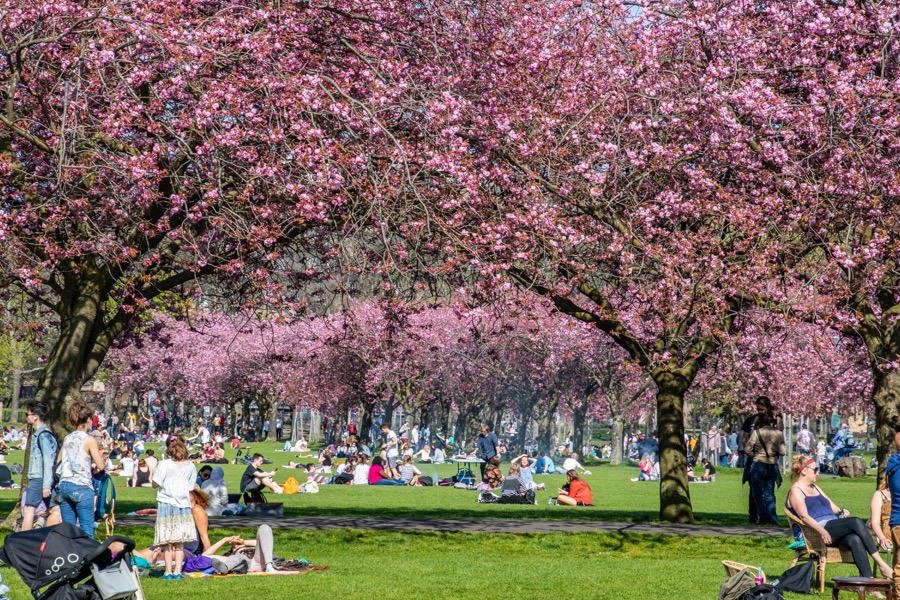 Three days into the long Easter weekend and with the requisite amount of DIY completed we ventured out for a walk to take in some of Edinburgh’s magnificent cherry blossom. We, and the blossom, timed it well because not only were we on our third straight day of 20+ degrees sunny weather (unusual in Scotland and particularly unusual for the Easter weekend) but Easter Sunday in Edinburgh was the hottest on record, peaking at 23.4℃ (74.1℉).

We started from the west end of The Meadows, with the iconic silhouette of Arthur’s Seat rising ahead of us, resplendent in the afternoon sunshine.

To the north, on our left, the charcoal grey blocks of the Quartermile development create a pleasing contrast with the bright cherry blossom of the trees lining Coronation Walk.

Slightly further along the Scots baronial buildings of the old Edinburgh Royal Infirmary introduce some more variety to the backdrop’s roofline.

Looking north along Coronation Walk the sun was streaming through the blossom casting dappled shadows on the path below.

On Jawbone Walk too the canopies arched over the path providing patchy shade to those transversing The Meadows.

Looking back across The Meadows towards Barclay Viewforth church on the edge of Bruntsfield Links, the smoke of a thousand barbecues hung in the air.

We joined Jawbone Walk and walked through the relative shade to the junction with Middle Meadow Walk at the north of The Meadows then turned down Boys Brigade Walk.

We followed Boys Brigade Walk down to Melville Drive and crossed onto Livingstone Place on our way to The Grange, turning along Grange Road then down Findhorn Place where we came across this rather photogenic house on Findhorn Place with a cherry tree in front of it.

Looking down Findhorn Place we could see more cherry trees in the distance. 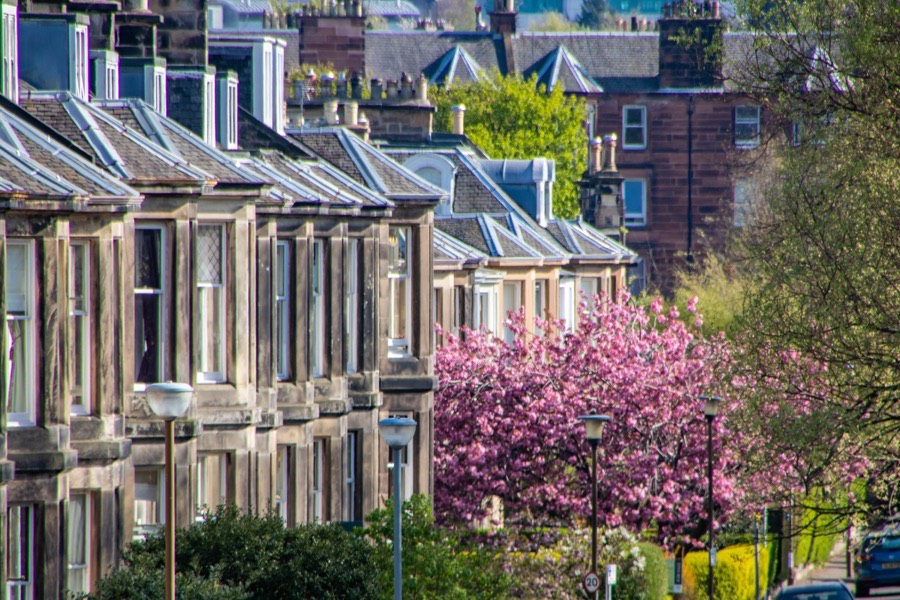 We didn’t continue down Findhorn Place however, instead we turned along Grange Loan then up Ratcliffe Terrace before turning onto Duncan Street and past the Edinburgh Geographical Institute. The building was constructed to a design by Henry Ramsay Taylor but is notable for the portico designed by Thomas Hamilton which was transplanted from Falcon Hall in Morninsgide.

Falcon Hall was built in 1780 but demolished in 1909. Dr John George Bartholomew, owner of the mapmaking company John Bartholomew & Son and a founder member of the Royal Scottish Geographical Society, had been a tenant of Falcon Hall and when his firm, which he had renamed The Edinburgh Geographical Institute in 1888, moved to their new premises on Duncan Street in 1911 he had the central portion of Falcon Hall’s façade incorporated into the building.

At the end of Duncan Street we turned up Minto Street and almost immediately found more cherry blossom in front of the appropriately named Blossom Guesthouse. 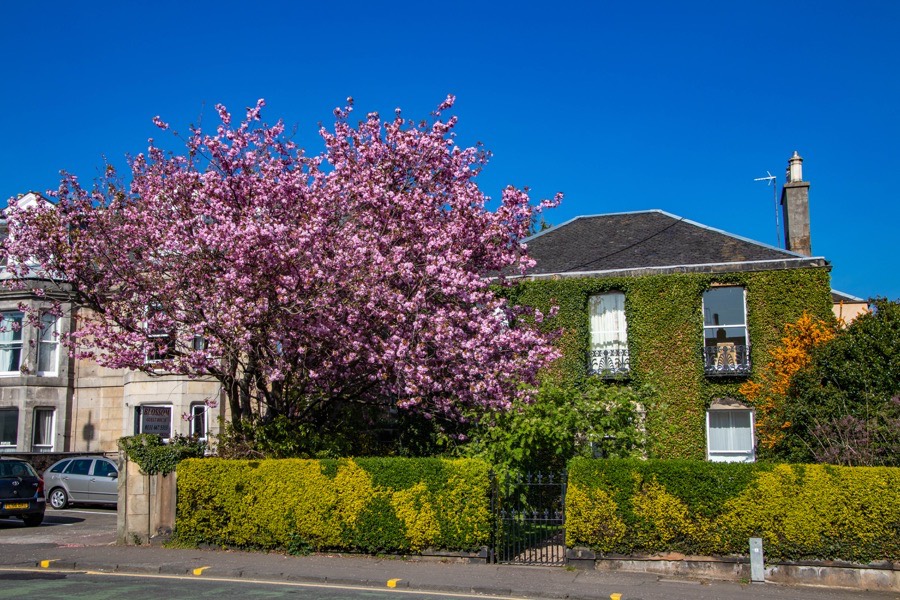 A couple of houses up the street we found two more cherry trees poking out above box hedges.

We continued up Minto Street to where it becomes Newington Road, passing this classic 1966 Land Rover Series IIA 88 on our way to a pit stop at Southpour. 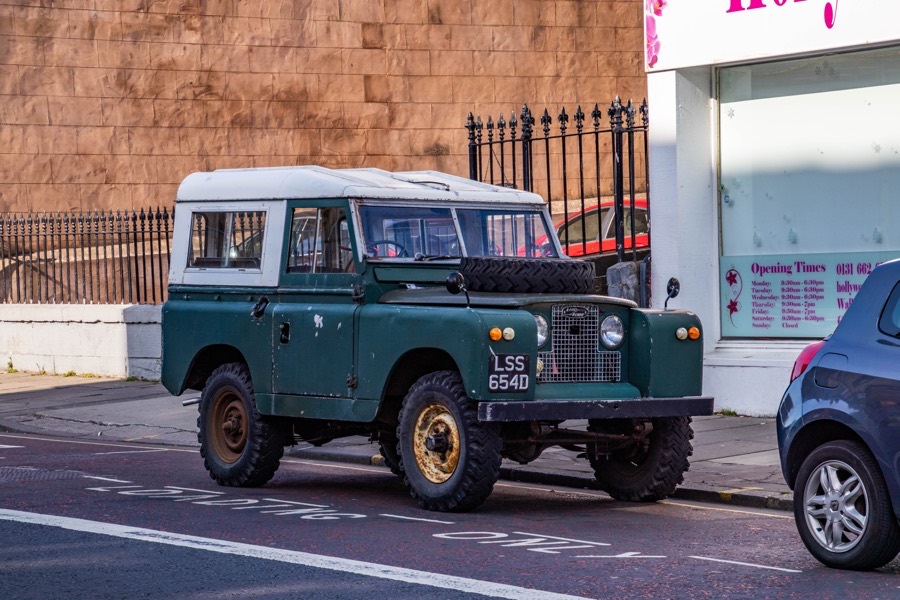 Next we turned down East Preston Street and as we passed the end of Oxford Street we spotted another cherry tree blooming at the opposite end of the street. 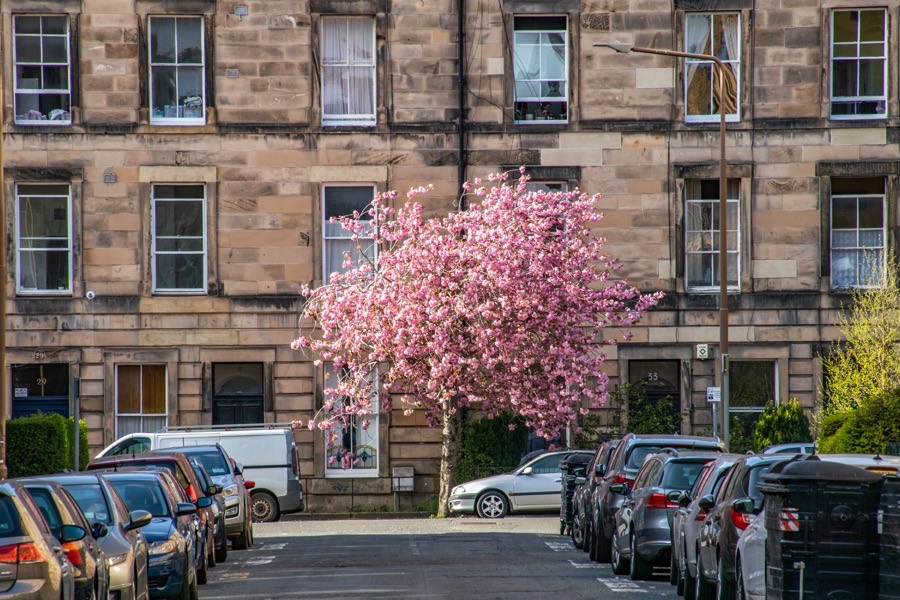 We walked along Holyrood Park to its junction with Queen’s Drive where there’s a fantastic view of the cityscape, with Edinburgh Castle, the spire of The Hub church, the dome of the university’s Old College, the crown steeple of St. Giles’ Cathedral, the Scott Monument and The Balmoral Hotel’s famous clocktower are dwarfed by gorse-covered slopes below the rocky cliffs of Salisbury Crags in the foreground.

Behind us rose Arthur’s Seat, at almost the same angle as we’d seen it from The Meadows earlier.

After a moment drinking in the views we returned the way we had come and turned up Dalkeith Road and St. Leonard’s Street, past Hermits and Termits and up Rankeillor Street and Gifford Park to Buccleuch Street. We turned down Boroughloch, named at the loch which used to occupy the area is now The Meadows, and passed the entrance to the old Boroughloch Brewery. 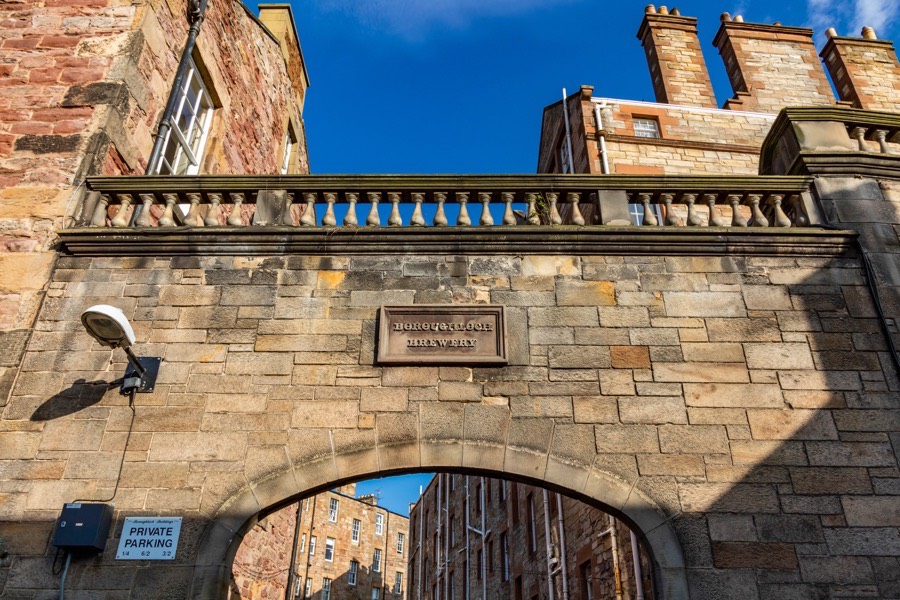 The Southside of Edinburgh was once a brewing hotspot and the Boroughloch Brewery was founded some time before 1805 by James Anderson. Following his death it was operated by his widow as Anderson & Inglis before being acquired some time before 1850 by Alexander Melvin. Alexander Melvin & Co was reputed to be the fifth largest brewery in Scotland by the 1860s but ceased trading in 1907 when it was absorbed into William McEwan & Co.

Back on The Meadows, we made our way home through the trees via North Meadow Walk.