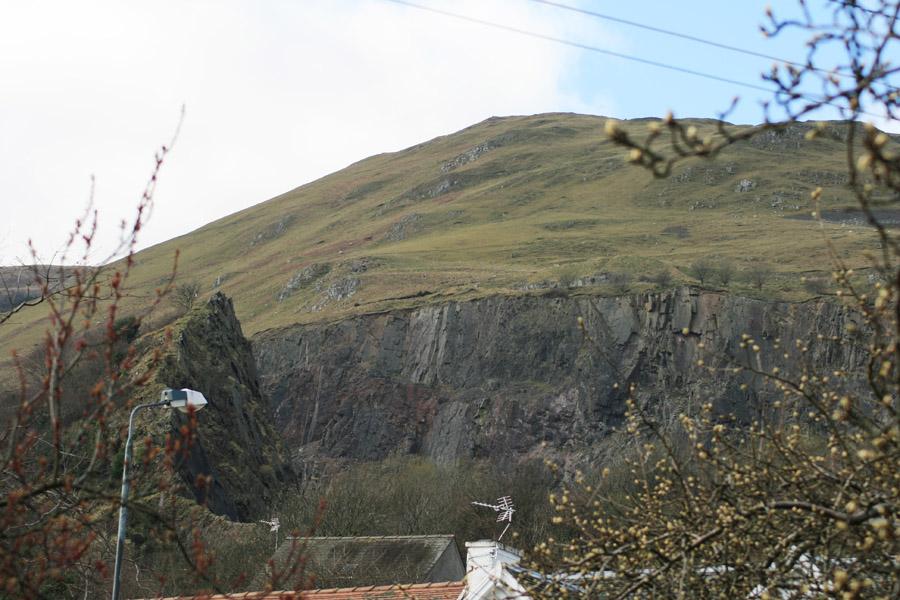 Castles and a broch in Central Scotland

We combined a trip today to the Sterling Mills shopping outlet in Tillicoultry with a bit of historical sight-seeing to balance things out.

It is said to have stood at the foot of Castle Craig, a promontory high above Tillicoultry, on which Castle Craig fort once stood. However intense quarrying has now destroyed the fort.

I thought initially that the site of the castle may also have been destroyed by the quarrying. But then I read that remains of Tillicoultry Castle were apparently still visible in the early 19th century, some time after which a house named Castle Mills was built on the site of it.

There used to be a mill called Castle Mill at the head of Upper Mill Street, and it seems this is probably where the castle once stood. It is now a small park next to the Tillicoultry Burn.

Next we drove over to Stirling, then down to the village of Torwood. It wasn’t somewhere I had even heard of until recently, and despite being at the centre of a triangle formed by the M9, M80 and M876, it is surrounded by historical sites spanning thousands of years.

A Roman Road passes through Tor Wood to the west of the village, but what we were most interested in was Tappoch broch. The path to it through the trees is carpeted with red pine needles from the trees above, which block out most of the sunlight.

The path twists its way through the dark wood until it opens out into a small clearing, the majority of which is taken up by the broch itself and a pair of large banks surrounding it. The outside doesn’t really prepare you for what is inside, the only hint that this is more than a mound of earth and vegetation is the small entrance visible in the centre.

Approaching closer, it can be seen that the entrance is between massive stone-built walls, with a heavy lintel over it.

Passing through the entrance takes you into the main chamber of the broch, the floor of which originally would have been the natural rock surface, but which is now covered with vegetation and dislodged stones from the surrounding walls. To the left of the entrance is another doorway, giving access to an intra-mural staircase.

Climbing the staircase takes you onto the top of the walls, from where you can really appreciate what an impressive building this is. It’s quite amazing to think this has survived around two thousand years. Part of the reason for its survival is likely down to the fact until it was excavated in 1864, it took the form of a large mound of earth.

Clicking the photo below will open a panorama image in a new window to give you a full view of the broch‘s interior.

After spending a bit of time exploring the broch, we retraced our steps back through the forest, passing on the way some fantastically-twisted tree roots.

Back onto the main track running along the edge of Tor Wood, we continued up to Torwood Castle, which in the 19th century was owned by Lieutenant-Colonel Joseph Dundas who was responsible for excavating the broch.

Relatively little is known about Torwood Castle, but it was built in the 16th and 17th centuries for the Forrester family, who were hereditary keepers of the Royal forest of Tor Wood. Exactly when it fell out of use is unclear, but it now forms a substantial ruin.

Built on an L-plan, the doorway is at the bottom of the projecting stair tower, defended by gun loops.

Above the door is an ornamental niche which would originally have held an armorial panel, although that is now missing.

The main block of the castle contained the living accommodation, including a great hall on the first floor. Reflecting the changing fashions (and relative stability) of the time, this features large windows.

Above the main hall was an attic level, and to the side of that, at the top of the stair tower, would have been a cap house, reached by a now-ruined small spiral staircase.

Extending from the stair tower is a high wall, which originally formed the western edge of a courtyard, inside which would have been various ancillary buildings.

There was access from the courtyard into the basement level of the castle, which contained the kitchen and storage cellars, via an arched entrance. This has now been blocked up, but the stones of the arch can still be seen.

With the sun starting to go down over the horizon, we set off back down the track to the car.