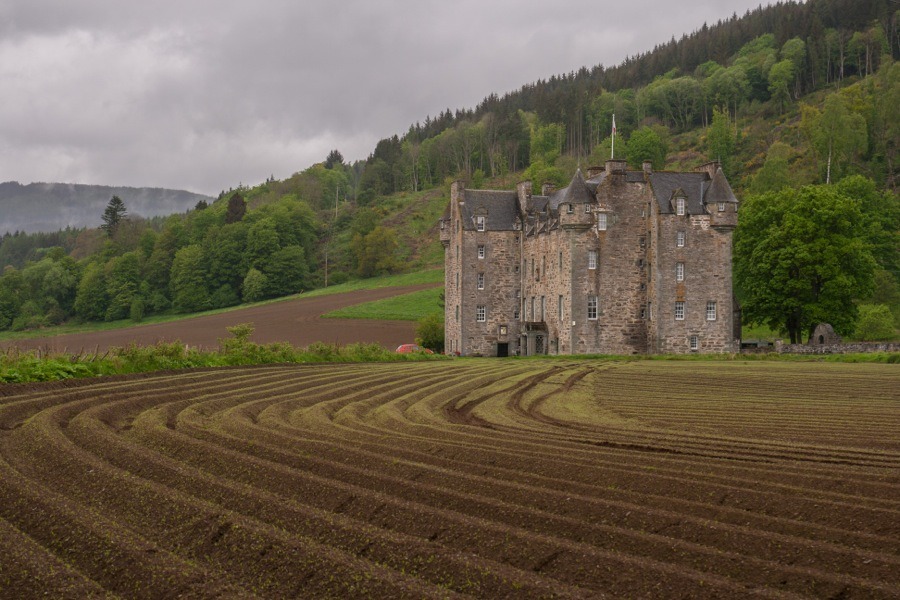 Castle Menzies and the Old Kirk of Weem

On an overcast day today we headed north to rural Perthshire and Castle Menzies, a 16th century Z-plan castle. Light drizzle was falling from the sky by the time we arrived and drove up the driveway.

Entry is through a doorway housed within an ornate stone porch, an early eighteenth century addition.

Leading off the entrance hall is a kitchen, housed within a barrel vaulted room at the east end of the castle and featuring a hug fireplace.

Back across the entrance hall a corridor leads to the west end of the castle where there are a pair of barrel vaulted storerooms, one of which contains an old staircase leading up to the Great Hall above.

At the end of the corridor a doorway opens into a corridor leading to a 19th century wing through what was once the external wall of the castle. As a result the bottom of a corner turret can now be seen inside the corridor.

The corridor gives access to the 19th century wing which was designed by William Burn, and on its first floor is the grand Dewar Room, named after Dr & Mrs Dewar who were heavily involved in the restoration of the castle.

The only access to this new wing is through the ground floor corridor so we returned that way to explore the main part of the castle, passing on the way the old yett, or metal gate, across the original entrance.

A wide spiral staircase leads up to the first floor and what would originally have been the Great Hall.

Off that is what is now described as a withdrawing room, although it would probably originally have been the laird’s bedroom. It features ornate plasterwork on the ceiling.

Beyond that is another room, within the north tower, which contains various artefacts including a plaster cast of Mary Queen of Scots’ hand.

We made our way back through these rooms and back onto the spiral staircase.

The second floor would originally have contained the private apartments of the laird’s family.

Up another level is the third and final storey which is awaiting full restoration.

There are great views from the top of the castle, and today in particular with beautifully-ploughed fields either side of the driveway. 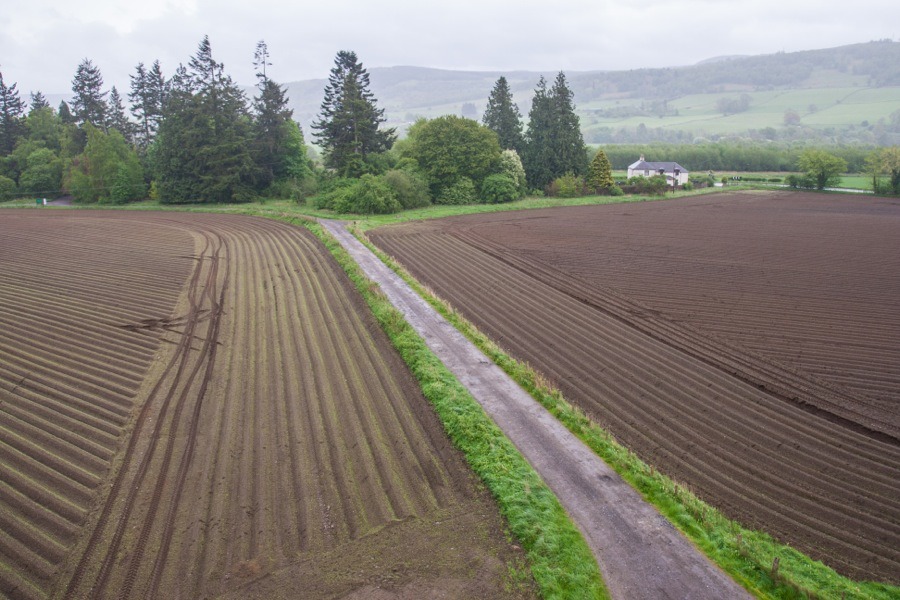 We descended the spiral staircase and made our way outside. To the right of the eighteenth century porch as you leave is the original entrance, with a heraldic panel above it carrying the Clan Menzies motto “Vil God I Sal” (With God I shall), the initials IM and BS for James Menzies and his wife Barbara Stewart, and the date 1571 commemorating their marriage.

High above the new entrance is the royal coat of arms of Scotland.

At roof level are several ornately carved pediments over the dormer windows, including this example carved once again with the initials IM and BS, the words “In owr tyme” and “Prysit be God for ever” and the date 1577.

The freshly ploughed fields surrounding the castle were really rather photogenic, so we went for a wander between them and also to get a view of the castle from a distance. 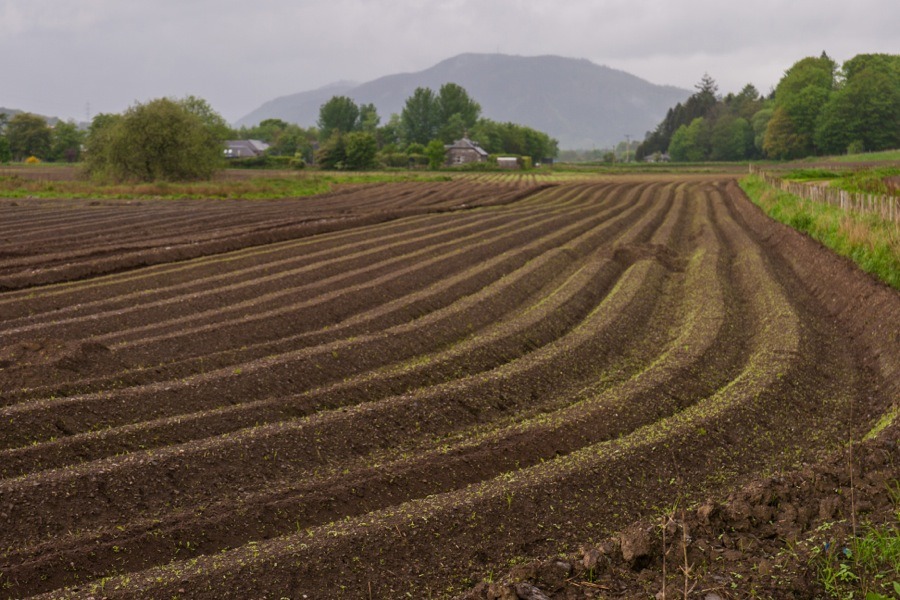 To the north-west of the castle is one of the proposed sites of Weem Castle, also known as the Place of Weem, the predecessor of Castle Menzies.

Whether or not the old castle stood there is unknown, and there are two other possible locations – on the site of Castle Menzies itself having been incorporated into the newer castle, and at the old entrance to the castle driveway in the village of Weem.

Around the back of the castle is where an eighteenth century wing once stood, although it has now been removed leaving blocked up connecting doorways visible on the walls.

After a good wander we left the castle, pausing at the end of the drive to take a picture across the ploughed fields.

Just around the corner in the village of Weem are the aforementioned entrance gates, another possible site of Weem Castle.

A short walk away is the Old Kirk of Weem, built in the mid-15th century by the Menzies family.

Behind the church are the crags of the Rock of Weem where mist was hanging amongst the trees of Weem Wood.

On the way home I was tasked with finding some bluebells, and luckily we found some just off the Wade Road on the way to Dunkeld at the entrance to Rotmell farm. 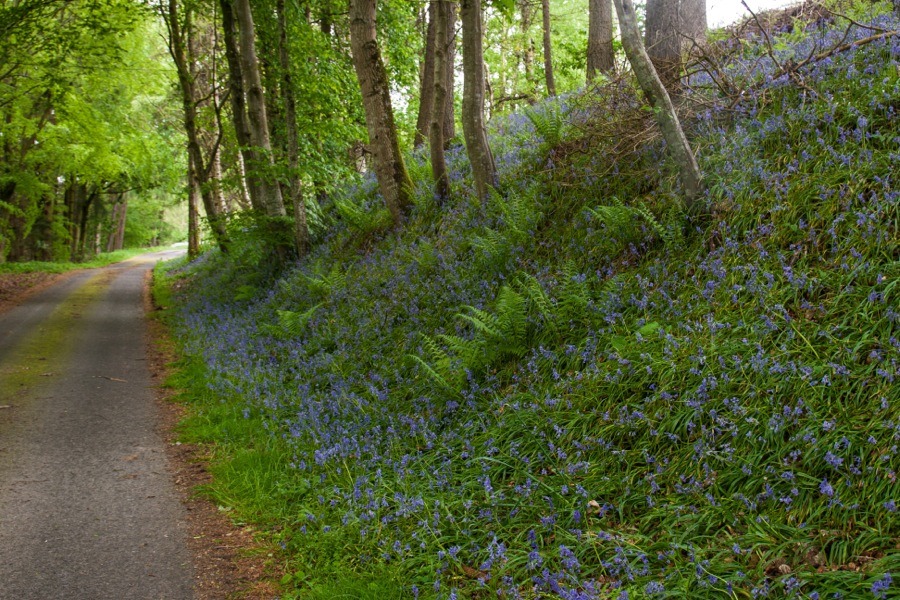