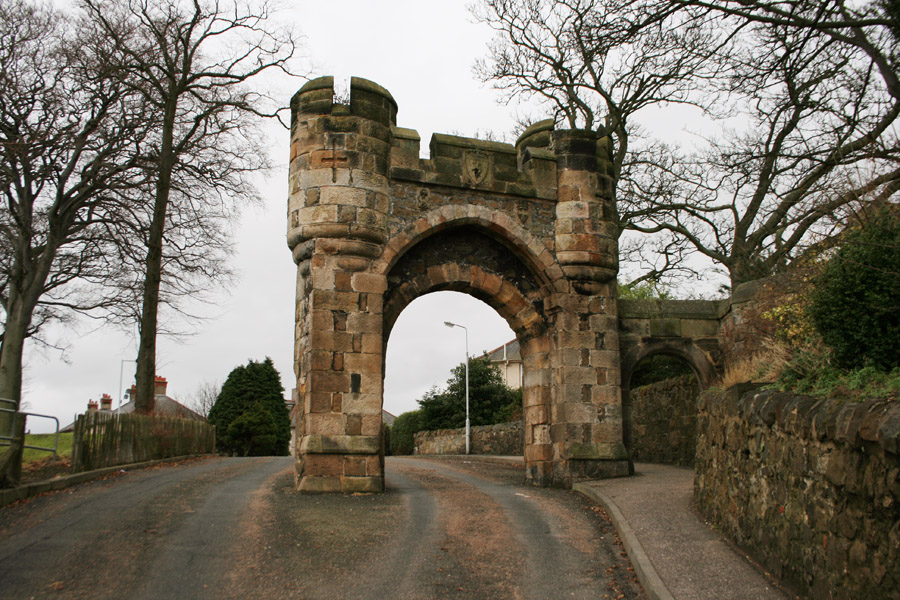 Today, on a bit of a dreich day, we headed across the River Forth into Fife, in search of castles. Castles of quite a different kind from one another – one a large, impressive, restored castle, and two of which nothing now remains.

After driving over the Forth Road Bridge we turned east along the south Fife coast to Burntisland. A former royal burgh, it was once owned by the abbots of Dunfermline Abbey, who had a tower here perched on the cliffs above the harbour.

Rossend Castle (as it became known) began life as a simple keep in the twelfth century, but was extended over several centuries to become a rather large castle. It is approached via a 19th century gateway over the public road.

The ground floor of the castle is said to incorporate elements of 13th century stonework, possibly including a religious building as there are church-like lancet windows.

By the mid-20th century Rossend Castle was empty and its condition deteriorating, but in 1957 a magnificent painted wooden ceiling was discovered by accident in the main hall. It was removed for safe-keeping, and is now in the National Museum of Scotland in Edinburgh.

In the 1960s the condition of the castle was so bad that Burntisland Town Council wanted to demolish it. Luckily it was saved following a public enquiry, and it was bought and restored by a firm of architects, who now use it as their office.

Despite a housing estate nearby, and the cranes of the docks below, the castle is still a magnificent sight. From Burntisland we continued east to another coastal town, Kinghorn.

Unlike with Rossend Castle it’s very much necessary to use one’s imagination when it comes to Glamis Castle.

Glamis Castle once stood on a hill overlooking the beach and harbour of Kinghorn below, and while it’s fairly easy to appreciate the defensive position of the castle, it’s rather more difficult to imagine how it would have looked, as the hill is now covered with housing.

Similarly to the south at Ross Ness, the site of Kinghorn Castle, there is now nothing left to see, save for the view down to the River Forth which must have played a part in the castle having been sited here.

We continued around the peninsula to Pettycur harbour.

We had also intended to try to get to Seafield Tower, but we decided to save that for another day, and drove back around the coast and across the bridge to Edinburgh.