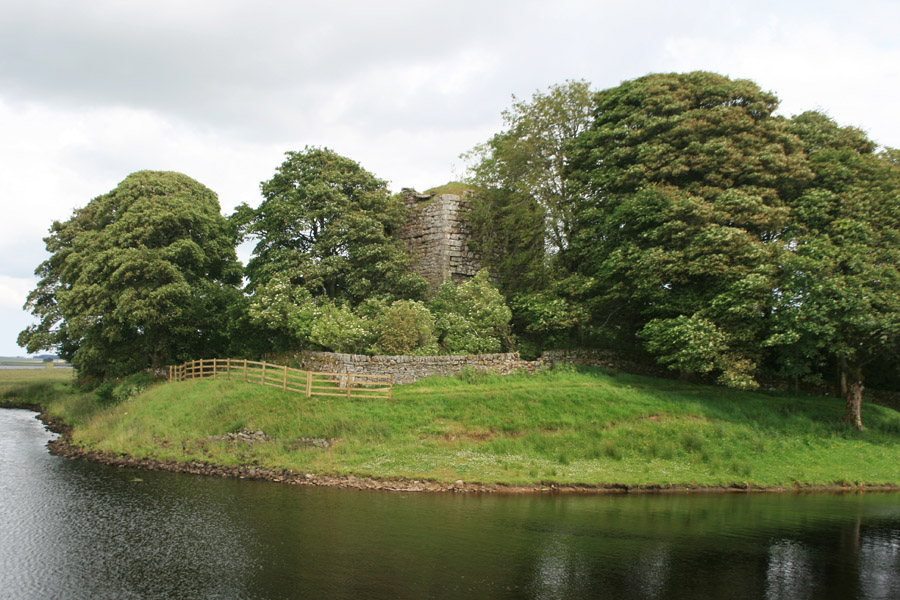 During a break in the rain we drove south-west of Edinburgh today to Harperrig Reservoir, and as so often happens, the sun came out and the sky turned blue. In places!

Harperrig is notable for having the Water of Leith flowing through it, the source being a few miles further to the south-west in the boggy ground beyond Colzium.

The Water of Leith enters the Harperrig Reservoir at the south-west corner, and it was across here that we walked on the Cairns Castle Bridge. Unsurprisingly this bridge leads to Cairns Castle!

Cairns Castle stands on an area of raised ground projecting into the reservoir, and although the reservoir is relatively modern, the castle would have been afforded protection by the Water of Leith to the west and a burn to the south.

The castle is thought to have been built around 1440 by George de Crychtoun, or George Crichton, who was later created the Earl of Caithness by James II. It consists of a main almost square tower rising to a height of three storeys, attached to which was a secondary tower to the south-east. The main tower is still a substantial ruin, but most of the smaller tower has gone.

Although fairly plain in style, some architectural details can still be seen, including several windows. The tower’s east wall is largely covered with thick ivy now, although it is still possible to see the arched doorway into the original kitchen in the vaulted basement.

The castle was ultimately replaced in the 19th century by Cairns House which stands next to it. A new way-marked path continues beyond Cairns Castle and Cairns House along the edge of the reservoir.

Harperrig is popular with anglers and birdwatchers alike, and a bird hide has been installed on the south shore. Unfortunately we didn’t see much apart from seagulls, although we had seen a heron and a buzzard as we approached the car park.

The reservoir is due to become a Local Nature Reserve soon, and while I think it is possible to walk all the way around it, the path doesn’t seem to go all the way yet. There is also a path which leads up to Cauldstane Slap and East Cairn Hill in the Pentland Hills, but we weren’t feeling very energetic today, so retraced our steps back past the castle.

As we rounded the castle, we were surprised by a black labrador, who then proceeded to lead us all the way back to the car. There are many myths and legends of phantom black dogs protecting ancient sites, or roaming across wild hillsides, but this one was wearing a collar and I’m pretty sure she came from East Cairns farm.

Rather than just head back to Edinburgh, we decided to stop and have a look at a couple more castles on the way home. First up was Calder House in the nearby village of Mid Calder, just on the edge of Livingston.

It really was just a look, from a distance, as the house is private and home to the Sandilands family, who have owned it for 500 years. Built in the mid-16th century, it probably incorporated parts of an earlier tower, the Sandilands possessing the barony of Calder all the way back to 1348.

In the 17th century it was extended to the north-west, although this part of the house isn’t visible from the road. The Sandilands were an influential family, and played host over the centuries to guests as diverse as John Knox, Mary Queen of Scots and Frédéric Chopin.

Our next stop was another short drive away. Houston House, which is now run as the Macdonald Houstoun House hotel, is a late 16th century tower house, built in 1598 by John Shairp, an advocate to the aforementioned Mary Queen of Scots.

Houston House was extended in the 17th and 18th centuries, and was then refurbished and converted into a hotel in 1969 and 1970.

On the east wall is space for an armorial panel, which has been replaced with a modern wooden version, commemorating the original construction in 1598 with the initials JS and MC (for John Shairp and his third wife Margaret Collace of Muirtown), and the restoration in 1969 with the initials KK and PR (I think these are for Keith Knight who may have owned the castle at that time, and presumably PR for his partner).

The conversion to a hotel included the addition of a glass-fronted reception, and a low, two storey bedroom block, which aren’t exactly in keeping with the magnificent 16th and 17th century architecture behind them.

Despite the extensions, it’s still a very impressive building.