On a gloriously sunny day today we headed up to Callander with the intention of doing a circular walk taking in the Bracklinn Falls, a fort and a huge chambered cairn. We parked in the public car park behind the Dreadnought Hotel from where there was a great view of the snow-covered lower slopes of Ben Ledi.

We made our way along teh back of the town on Ancaster Road before starting to climb up past the golf course on Bracklinn Road. All on tarmac so far, we were glad when a sign pointing to the Bracklinn Falls took us along a woodland path.

The path took us along the edge of some old woodland that was home to some wonderfully twisted trees covered in moss and lit up by the low winter sun. 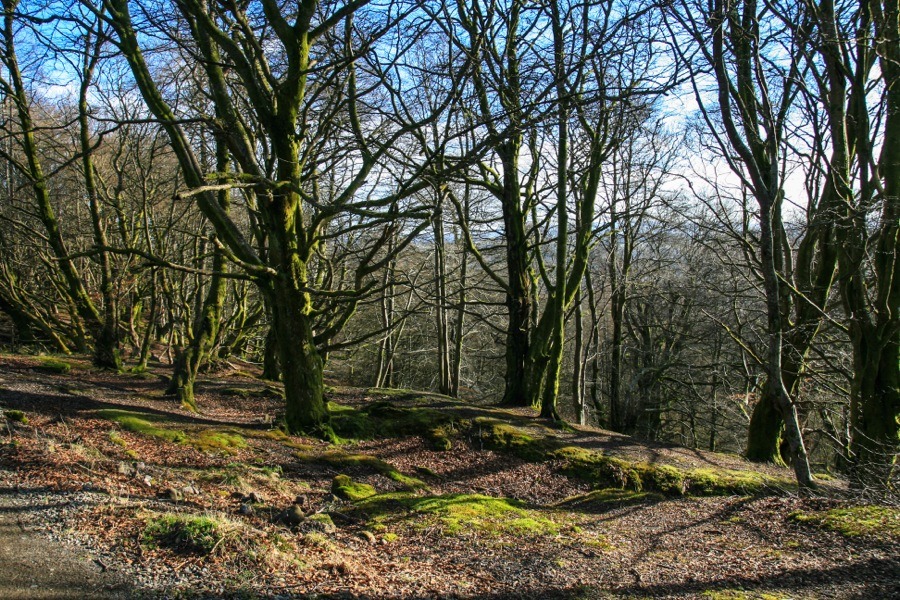 At the end of the ridge along which we were walking the path descends into Brackland Glen through which the Keltie Water runs. The Bracklinn Falls is where the river flows over the Highland Boundary Fault, the geological fault line that separates the Highlands from the Lowlands.

There used to be a Victorian bridge across the river, built for a visit by Queen Victoria in the 1870s, but it was washed away by extreme flooding that occurred across Scotland in August 2004. In 2010 the bridge was finally replaced with a beautiful wood and copper footbridge.

As the River Keltie rushes through breaks in the rocky fault line it takes quite a drop in height.

From the falls we retraced our steps back up onto the ridge, then turned south-east into a forestry plantation. We had hoped to visit Auchenlaich fort but for some reason didn’t manage to find it. I suspect we were probably in a slightly different place to where we thought we were when we disappeared into the thick forest in search of it.

After some fruitless searching we made our way back to the track and continued on our way. Eventually we came out of the forest just above Auchenlaich farm and were rewarded with views back across to Ben Ledi.

Auchenlaich farm is notable for being home to the longest burial cairn in Britain, Auchenlaich chambered cairn. Stretching for some 350m in length it has been much disturbed over the years with material robbed for building work, field clearance material added, and a road and a couple of track cut across it.

Within the cairn material are two stone-lined burial chambers, one of which is still quite well preserved with the side slabs and head stone still in place.

The scale of this ancient monument really makes you think how different this area must have been thousands of years ago. Incredibly quiet today with a low population density, the cairn must have taken a huge amount of organisation and manpower to construct and presumably was intended to commemorate high status individuals.

Beyond Auchenlaich farm we joined the old line of the Dunblane, Doune and Callander Railway, now a footpath, from where we saw a heron flying overhead. 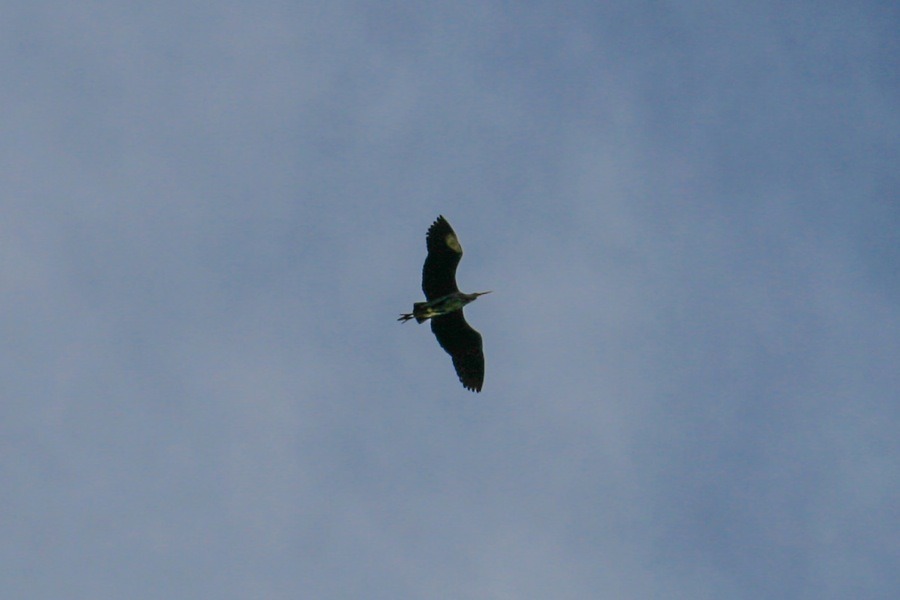 We followed the old railway line back into the centre of Callander passing the entrance to the Roman Camp Hotel, a dash of pink in an otherwise quite grey street. 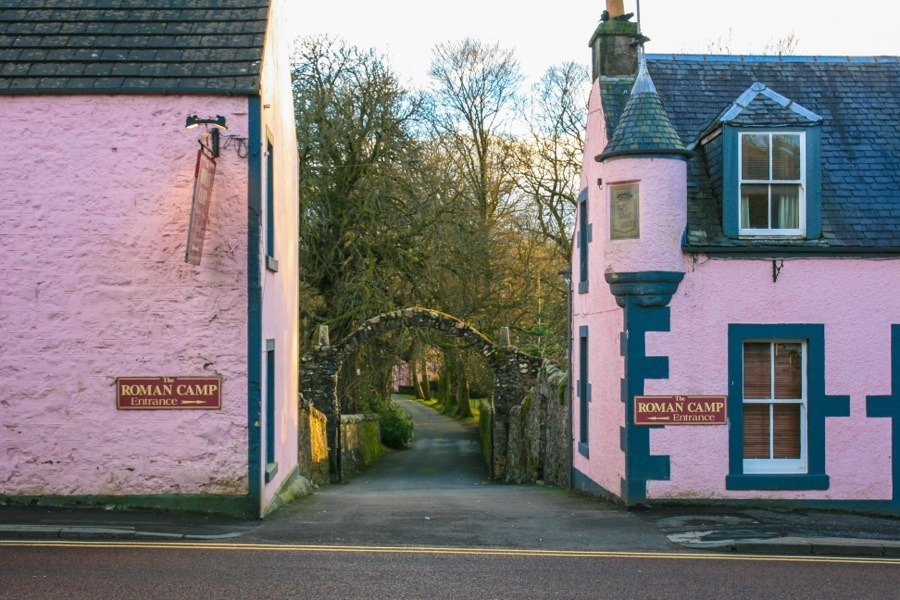 At the heart of Callander is the former St. Kessog’s Church, latterly a tourist information centre but now up for sale.

Within Callander on the north bank of the River Teith a small mound called Tom na Chisaig. The name translates as “hill of Kessog” which may relate to the fair of St. Kessog being held here until the early 19th century rather than there being a direct connection between the saint and the mound. The mound has the appearance of a motte and it is thought that a small castle would have existed here, perhaps prior to being superseded by Callander Castle.

There are steps leading up onto the top of the mound, from where it’s possible to appreciate it’s good defensive position despite its modest size.

The river was quite high, no doubt due to melting snow further upstream at Ben Ledi and beyond.

We walked back up onto Main Street and called in to Mhor Bread, for some bread funnily enough, before heading back to the car. 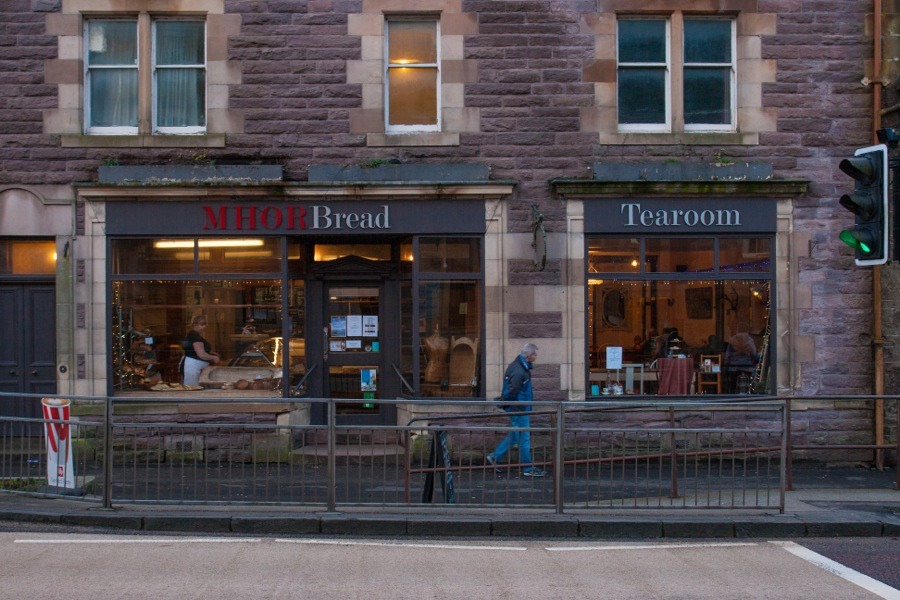 With the sun starting to go down we drove back along the A84 to Doune, but on the spur of the moment instead of continuing down the A84 we turned off onto the B824 to join the M9 that way. This took us past the David Stirling Monument at Hill of Row, and with the sun now setting we just had to stop.

Stirling, the founder of the Special Air Service, was born nearby at his family’s ancestral home Keir House. The monument also commemorates all the SAS members who’ve died in the service of their country.

By the time we left the last of the sun’s light was fading so we finally headed for home.