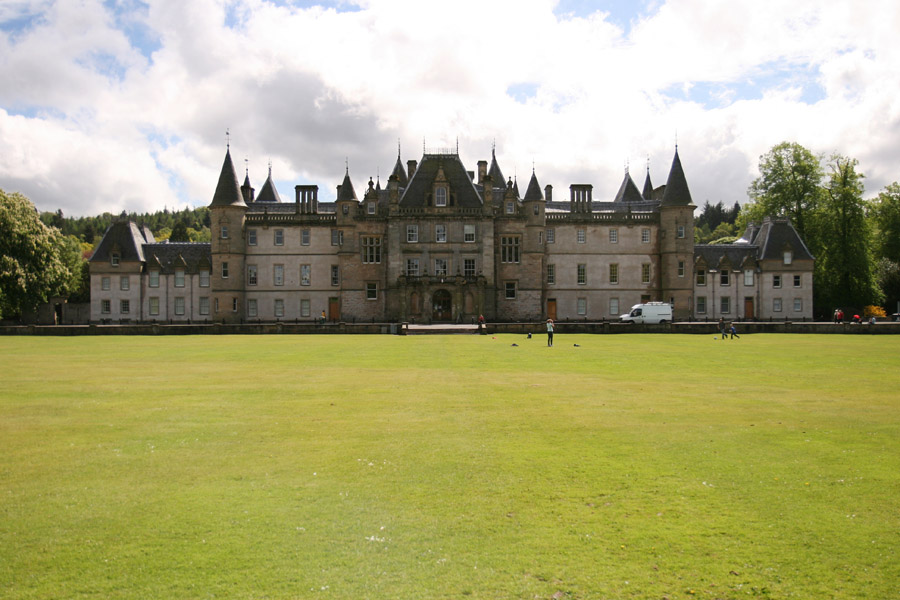 We’d been saving Callendar House for a rainy day, and today it was pouring with rain, so that’s where we went. Scottish weather being rather changeable though, it was warm and sunny by the time we arrived!

Callendar House is a free museum run by Falkirk Council (and home to the Council’s archives), and is a country mansion in parkland on the east edge of Falkirk.

The approach to the house is slightly unusual compared to other houses of this type, passing five huge tower blocks built in the 1960s. But once into the grounds the tower blocks are largely screened by trees, and it’s much like any other country estate really.

Callendar House today has the appearance of a sprawling French chateau with a hint of Scots baronial, and consists of a wide three storey block flanked by two storeys wings on either side.

However all is not as it seems, and the house incorporates some much older work. The present style dates largely to the period between 1869 and 1877, but this was just the last part of centuries of extensions and remodelling (and the subject of one of the exhibits within the house).

As you approach the house from the west you are actually walking towards the oldest part of it. In the 14th century a simple stone tower house was built here by the Livingston family, replacing an earlier wooden hall of the Thanes of Callander. The tower house was three storeys in height, and was incorporated into the later building just to the left of the round tower with the conical roof in the photo below.

The tower was extended in the 15th and 16th centuries, and played host to Mary Queen of Scots, as one of her Maids of Honour was Mary Livingston from Callendar House. By the 17th century the main block had reached the size that it is today, and at the end of that century the two storey wings were added to each end of it.

In the 19th century a grand new entrance hall and porch were added to the front of the house, topped off with corner turrets.

At the same time, around the back of the house, a new double staircase was added , sweeping down from the first floor to the gardens below. It was above this staircase that we caught a sight of something rather special.

Sitting at the top of a drainpipe was a squirrel. Looking closer we noticed that it had a young squirrel with it. 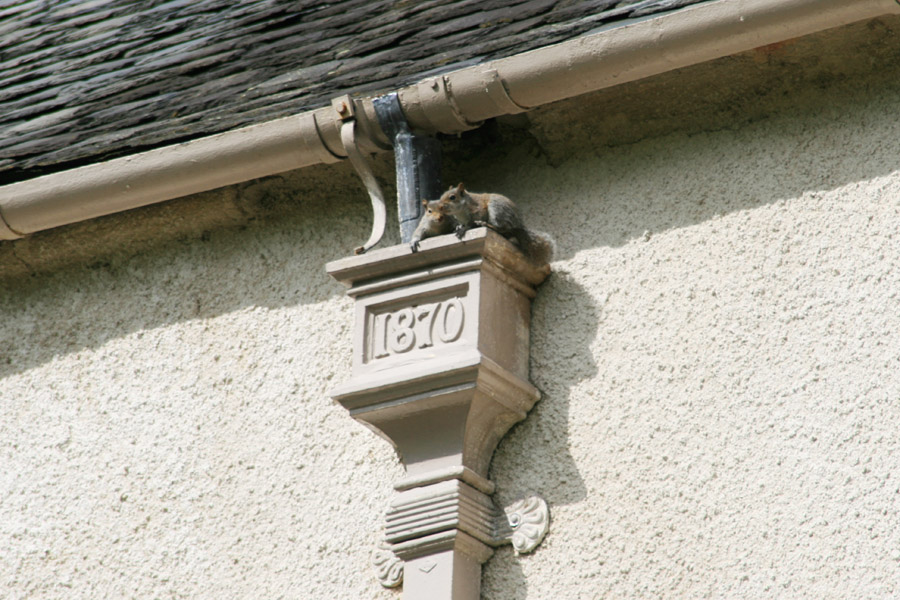 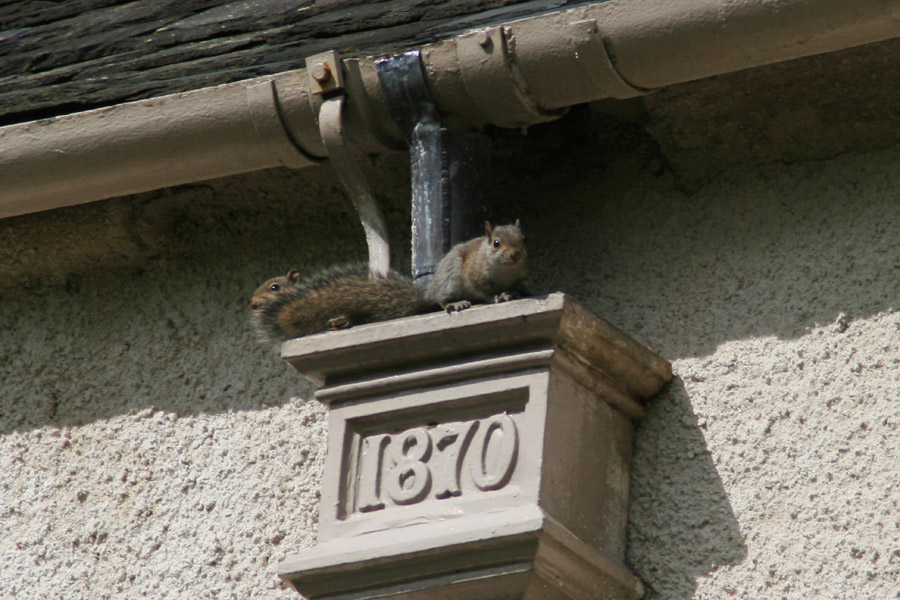 It became clear that the adult squirrel, presumably the mother, was trying to coax the young squirrel out of its hiding place and onto the roof above.

After several false starts, the young squirrel returning back to the drainpipe each time, they finally set off across the slates. 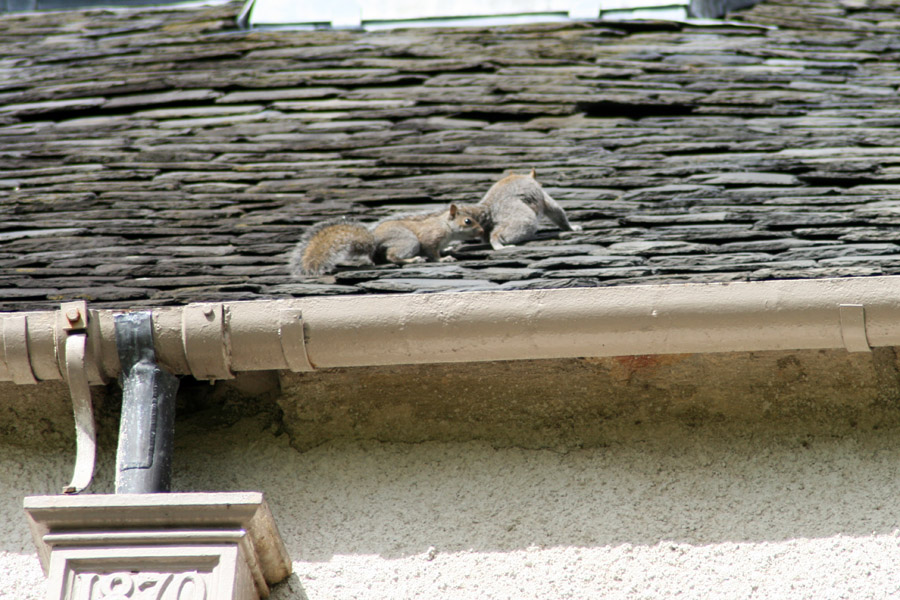 But the young squirrel still wasn’t happy on the roof, and so they proceeded to climb down the face of the wall, clinging to the rough harling.

Again the young squirrel didn’t seem too happy with the route its mum had chosen, and installed itself on a windowsill just short of the ground, the mother this time trying to coax her baby down rather than up. 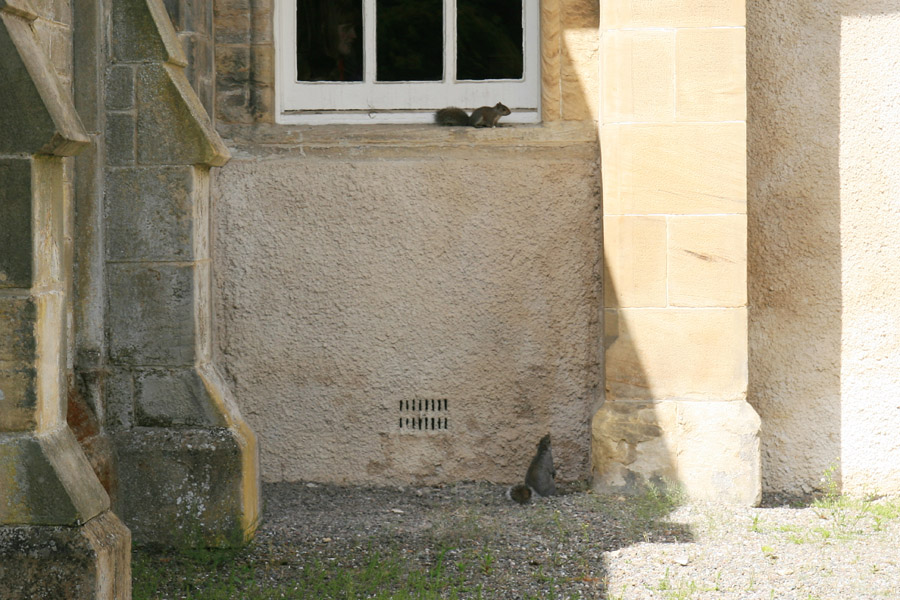 With the young squirrel refusing to come down, she climbed up the wall and walked it down, but not without some drama, taking a twisty route of intertwined tails.

Eventually the youngster made it down to the ground, and the pair of them darted off in the direction of the trees behind the house.

With the show over, we made our way into the house to have a look at the exhibitions, which included a look at the surrounding area in Roman times (the Antonine Wall passes through the estate), the development of Callendar House itself over the centuries, and a restored and working Victorian kitchen where we had the chance to taste some gingerbread.

While we were on the top floor of the house, we looked out of the window close to where we thought we’d originally seen the squirrels, and were lucky enough to get a close-up view of a pair of squirrels. Whether or not it was the same ones, or perhaps more youngsters from the same litter. It may even be that the drey was built in the top of the drainpipe. 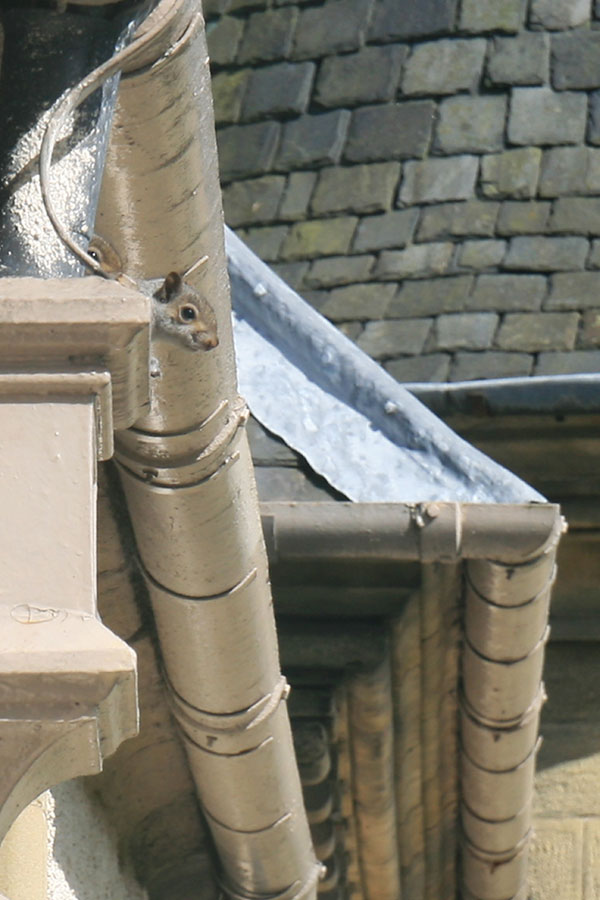