The weather forecast for today was predicting snow, but when I got to Crianlarich there was a distinct lack of the white stuff. The summit of Ben More was enshrouded with misty cloud and not looking very snowy at all. 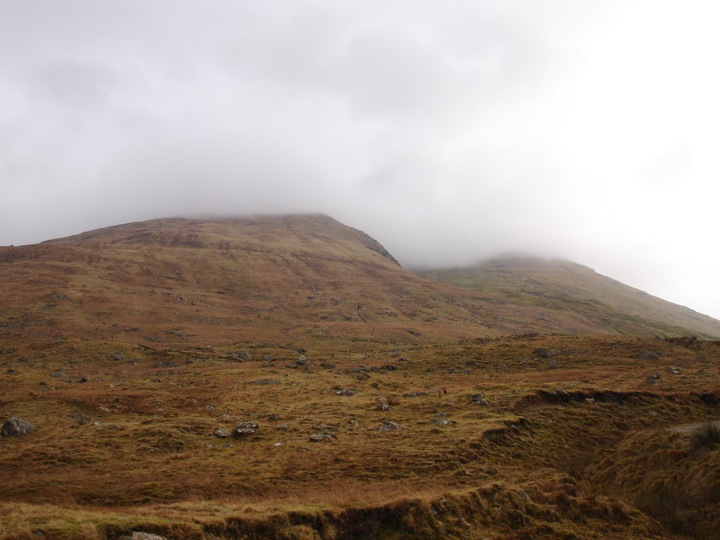 I parked in a layby on the A85 next to Loch Iubhair and nipped down to the water’s edge to take some photos, although the light wasn’t great. 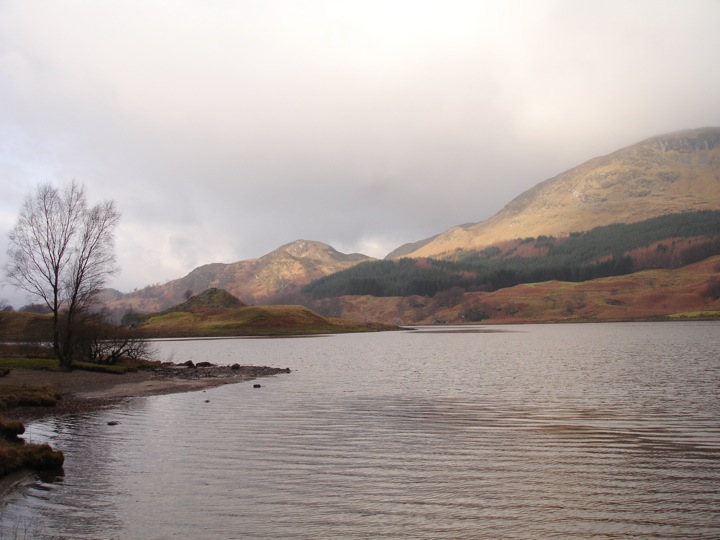 I walked back along the road to Benmore Farm where there’s a sign-post and style showing the way onto the track, which twists it’s way upwards. It seems like a long trek but looking back down over the farm to Loch Dochart makes it worth it. 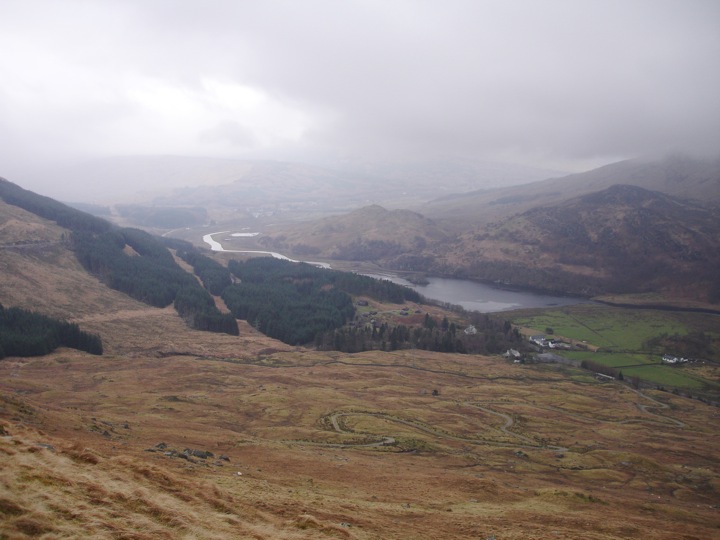 I’d left the track by this point, and was scrambling my way up the grassy slopes onto Sron nam Fosairean. I was half following a route in a book of walks, and half following a more common route I’d read about on a website, and as such I was caught in two minds about which way to go, and ended up taking the direct route up the hillside. Stopping for a breather, I looked down over Loch Iubhair. 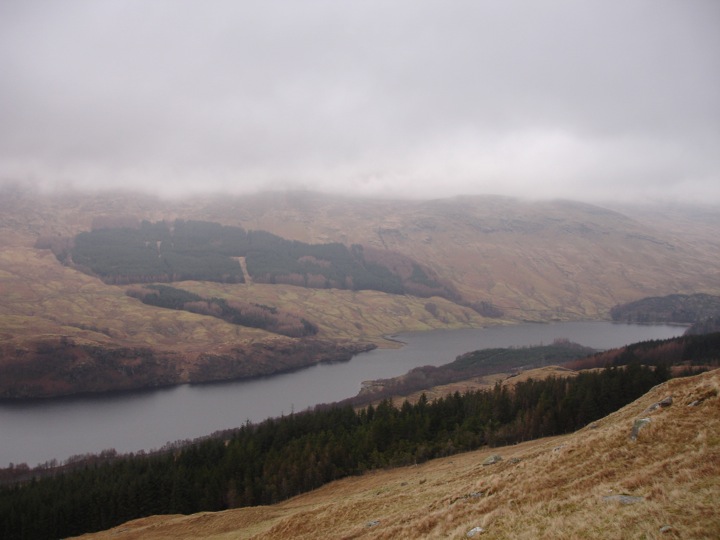 A couple of guys passed by, who’d got lost taking a route up through the trees to the east, and while I continued upwards, they continued around to try and meet up with the path further west. My direct route seemed to work though, and I joined a path heading straight up the mountain, following an old dry-stane dyke. I was well into the cloud by now so there was no view to speak of. The path turned east away from the dyke as it started to twist its way to the summit.

A bit further up I had to negotiate some tricky sections where large areas of ice were covering the path, necessitating detours around them since I didn’t have crampons. Eventually I reached the (very icy) summit where the visibility was very low. There’s a cairn at the summit proper, and also a trig point maybe 50 metres away, and they weren’t visible from one another. 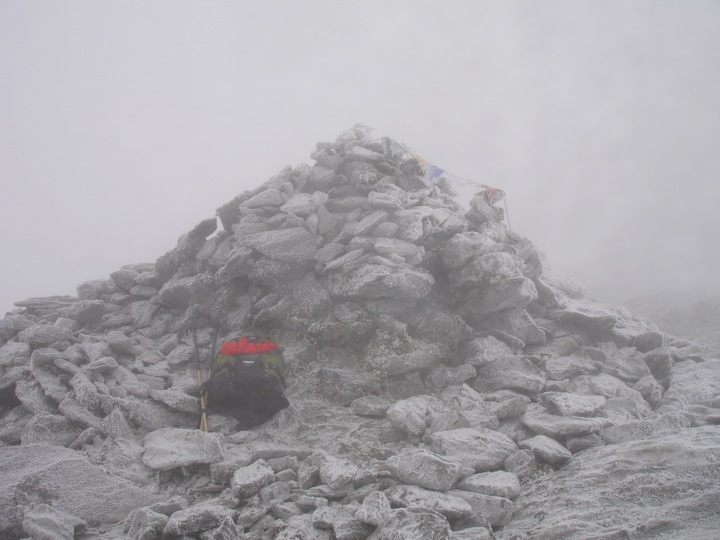 I had been hoping to do a circuit around onto Stob Binnein, Meall na Dige and Stob Creagach but there was a thick layer of ice covering the ridge between Ben More and Stob Binnein so I reluctantly decided to return the way I had come. Not before braving the wintry conditions for some lunch though, during which the two guys from earlier reached the summit.

I headed back down through the cloud, following the path (apart from when avoiding the ice) to the dyke and then followed that down. Instead of retracing my steps and cutting eastwards across the slope I continued straight down towards the track to the west in Benmore Glen and joined that, which took me back down to Benmore Farm. The weather down here had improved from earlier on, so on my way back to the car I went down to Loch Iubhair again to take some more photos. 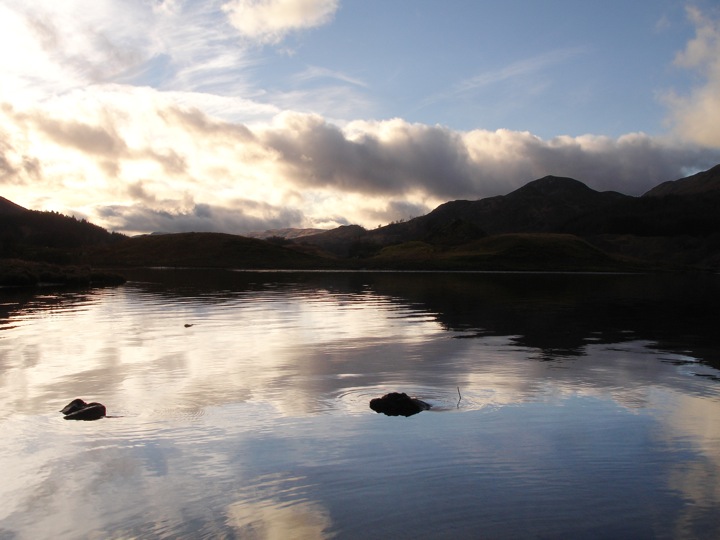 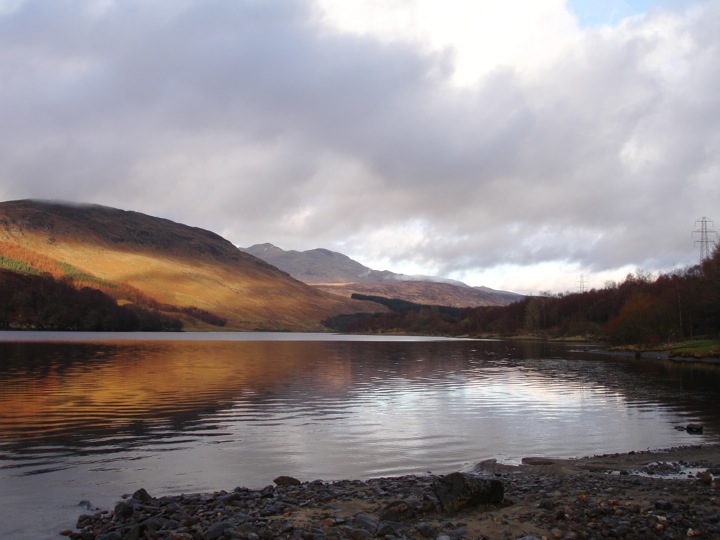