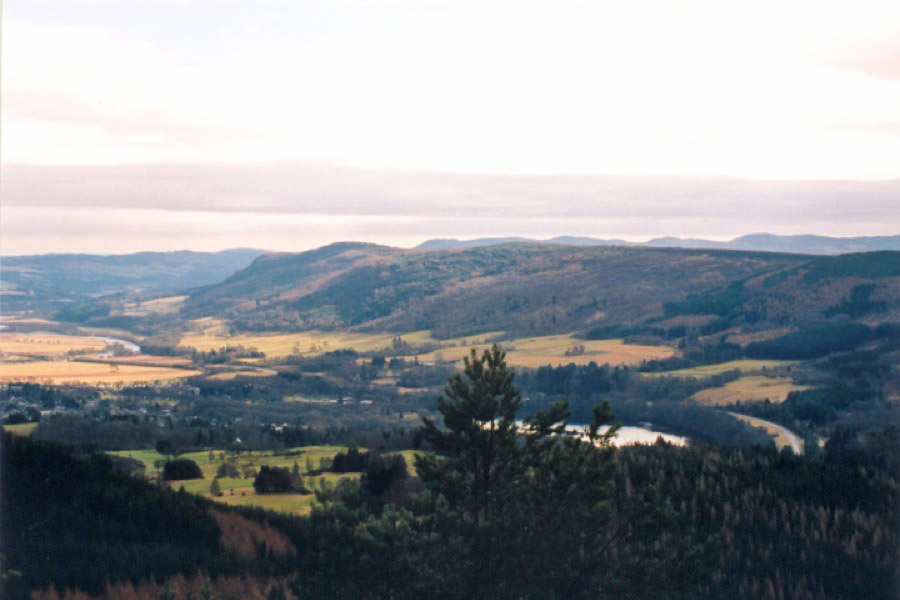 A trip to the summit of Craigower

First on the list today was Craigiedun, the remaining stones of a stone circle on the golf course to the west of Moulin and north-west of Pitlochry.

I parked in the centre of Pitlochry and cycled up the West Moulin Road past the Pitlochry Hydro where a stone circle once stood on Cnoc Dubh, taking the road behind the Scottish Megaraks‘ favourite haunt, the Moulin Inn. To the north of this road stands the mighty Dane’s Stone, but sheep were in grazing around it’s base, so I carried on for the golf course.

On a quick look from the path that skirts the north edge of the golf course, I couldn’t see much in the way of suspicious-looking stones, so I decided to press on up the path to the summit of Craigower and to have a better look for the stones on the way back down.

When I went up Craigower, I had no idea what to expect as I didn’t know much about it, but it was well worth the incredibly steep climb that meant pushing my trusty steed most of the way up. Not only is there the bizarre site of a winter adder sanctuary, but the views are just stunning. There’s a viewpoint indicator on the west side, but if you go to the south side there’s a bench which looks out over so many stones it’s untrue!

From this bench you can see the remains of the stone circle at Dunfallandy and the original site of the stones I was looking for on the golf course, Craigiedun. If you could take away the extensive modern tree cover and return the landscape to it’s state at the time the circles were built, you would also be able to see the stone circles of Faskally Cottages, Cnoc Dubh and Clachan an Diridh. Craigower is often described as an old beacon hill, but I haven’t been able to find any references to its use in more ancient times.

Having spent ages climbing the hill, the descent on two wheels seemed disappointingly short. Lifting my bike over the wall onto the edge of the golf course, I set off on foot to look at where the Craigiedun circle originally stood. If I got my bearings and dsistances right, the spot is marked by a couple of bushes next to a small clump of trees. Rustling through the undergrowth under these trees in search of stones, I was spotted for the first time by golfers.

I made my way back up to the very end of the golf course where there’s a deserted hamlet amongst the trees. It was here that the stones were said to have been dragged, on to the boggy ground that one of the greens rises out of like a huge green helipad. Stones that had stood for hundreds and hundreds of years were knocked down and dragged away so that they didn’t obstruct the golfers’ view of the 6th green! Which, surprise surprise, is named “Druids Stones“!

Poking around in the long grass, I found several large lumps which were too solid to be mud or tree stumps. Clawing away at the turf exposed several large stones, but the golfers were getting ever closer and ever more suspicious, so I made my way out of the trees, stopping only to confirm the name of the hole with one of the golfers, who didn’t realise that the stones were still there at the end of the course.

I continued my descent back down to Moulin, parking up by the edge of the field containing the Dane’s Stone. The sheep had moved further up the field, so I jumped over the fence to get some new photos. The last ones I had taken were at night on a Scottish Megarak trip, when the pull of the Moulin Inn had been too strong, and we hadn’t made it round the corner to the stone before nightfall!

Back in Pitlochry, I headed down for the river, and crossed the Tummel on the footbridge over to Port-na-Craig. Just beyond the caravan park and the tiny collection of houses that is Ballinluig is what at first glance appears to be the tree-grown cairn of Dunfallandy. There was at one time a circle of stones around this maginificently-situated mound, but these were removed around 1840 to shore up the nearby river embankment.

This was my last stoney-visit of the day. I continued down the narrow, twisty, hilly road along the south side of the Tummel to Logierait and the confluence with the Tay, crossed on the bridge, then took the B-road up from Ballinluig, passing the beautiful wee circle of Tigh na Ruaich on my way back to the car. I’d timed it just right, and was home in time to see the mighty Celtic stick 4 past Partick Thistle!