We had to go to Perth today for a tartan sale, looking for material for my girlfriend’s business (The Green Deer), so we decided to take advantage of being up there (even though it’s only an hour’s drive away) and see some sights.

After buying some tartan we headed west to Fowlis Wester, a small village whose size belies its obvious importance in the past, being surrounded by sites spanning thousands of years of history.

Right in the centre of the village is a tall Pictish stone, carved with a cross on one side and various Pictish symbols and designs on the other.

Well, that’s not entirely accurate. The one in the centre of the village is a replica, standing on the site of the original which has been moved into St Bean’s Church to protect it from the elements. The church dates back to the 13th century but was rebuilt in the mid-17th century, and a carved stone pediment over the entrance archway carries the following warning:

This stone is also actually a replica, and the original of this one lives inside the church too. The Pictish stone stands under an arch in the north transept, and is an impressive 3.15 metres (10 feet) tall.

Although it stood in the centre of the village for many years, at some point in history it was moved there from its original position at the entrance to the Sma’ Glen. It is decorated with men on horses, animals, and Pictish symbols such as a double-disc and Z-rod and a crescent and V-rod symbol, which may represent a Pictish king or family.

Behind this cross is a smaller, slightly later cross-slab which was discovered, along with fragments of two more Pictish crosses, in the wall of the church during restoration in 1927.

We left the village to the north, heading back in time by thousands of years by travelling to the Fowlis Wester stone circles. This is a complex site which seems to divide opinion on what exactly it is, but it certainly has a pair of large standing stones (one fallen), and a pair of cairns.

Whatever the reason for placing these stones here, the builders certainly chose a great spot with fantastic views across Strathearn below and the Ochil Hills beyond. 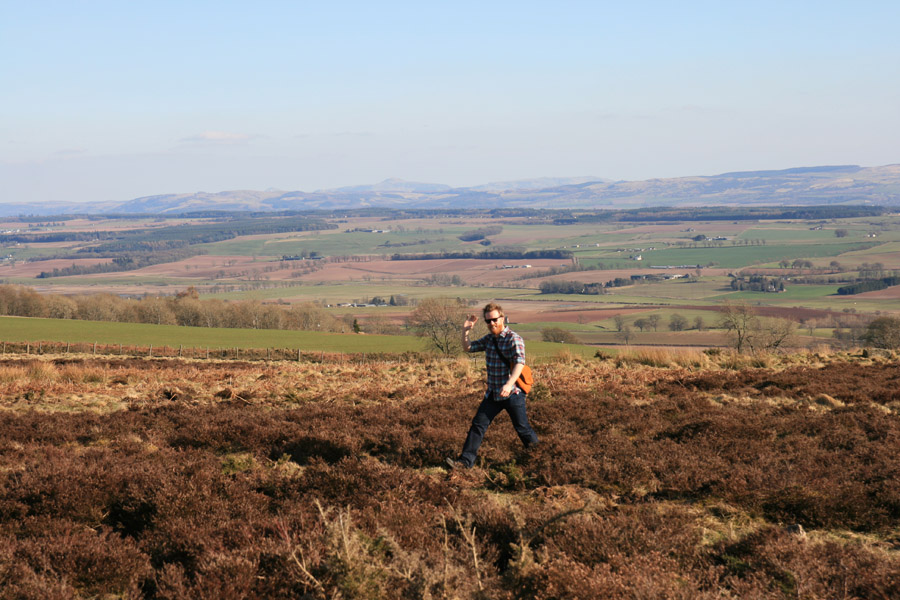 We returned back through Fowlis Wester, and continued west through Crieff to Comrie to visit the House of Tartan for more material. We then planned to go and see if it was possible to see much of Aberuchill Castle from the road, so we drove through The Ross on the edge of Comrie.

As we did so we spotted a pair of male pheasants squaring up to each other, and then proceeding to fight. 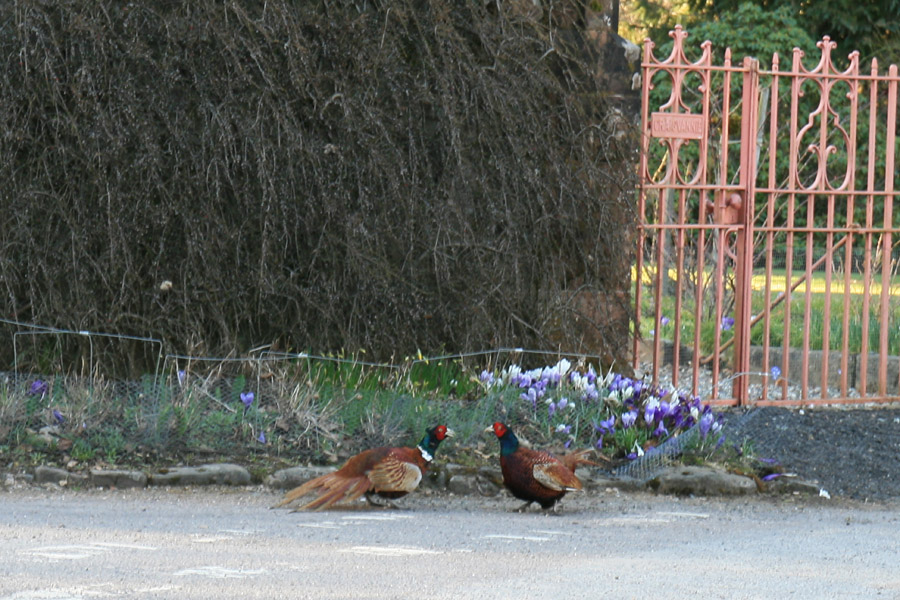 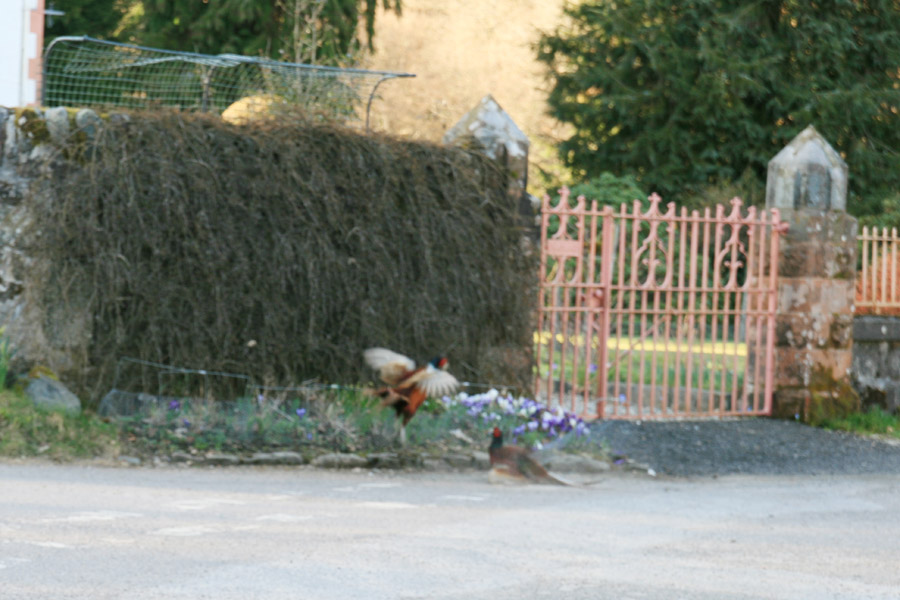 We must have watched them for a good 10 minutes or so, flapping at, scratching and chasing each other. Distracted by the excitement we missed our turn and ended up on the wrong road, driving towards Dalrannoch instead of Aberuchill and Dalchonzie. But it wasn’t a wasted detour as we stopped at the Water of Ruchill, flowing down from Glen Artney towards the River Earn.

We retraced our steps to The Ross, and took the correct road, with not a pheasant in sight to distract us. The answer to our question about Aberuchill Castle was that you can’t really see much of it from the road, it being pretty well screened by trees.

Just before reaching Dalchonzie fruit farm we spotted dozens of rabbits in a field, basking in the early evening sunshine. 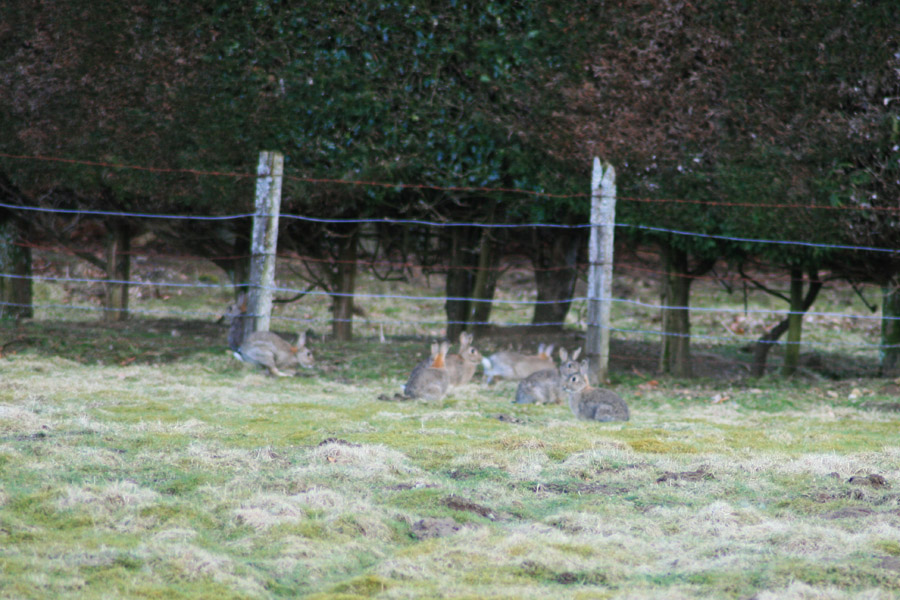 Being so close to Loch Earn, and with the sun getting lower in the sky, we drove the short distance to the loch in the hope of a photo opportunity, and we weren’t disappointed, the sun being low enough to create an interesting light effect on the water.

We headed back through Comrie to Crieff, then over the River Earn to the garden centre, where we were hoping to see Highland cows, but they had been replaced by Shetland ponies. 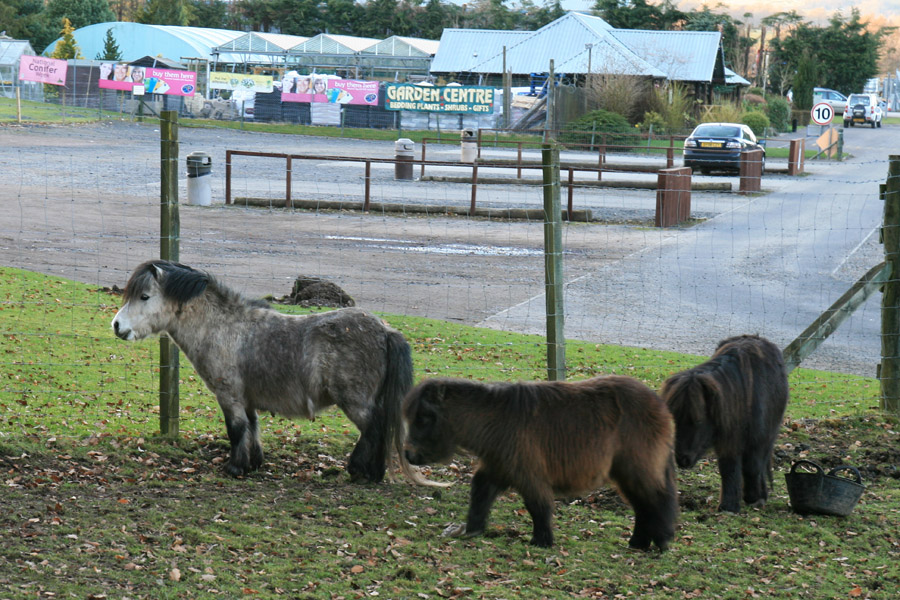 Once again the low sun was creating picturesque effects, with the trees next to their field having a warm glow emanating from between them. 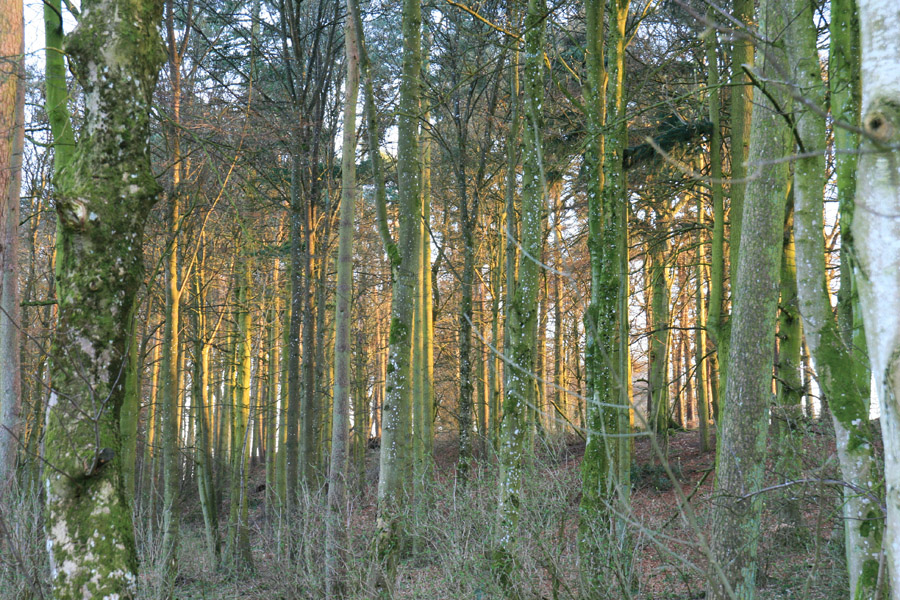 Across the road is the Dargill standing stone, but by now the light was fading, and this was to be the last photo before driving back to Edinburgh.