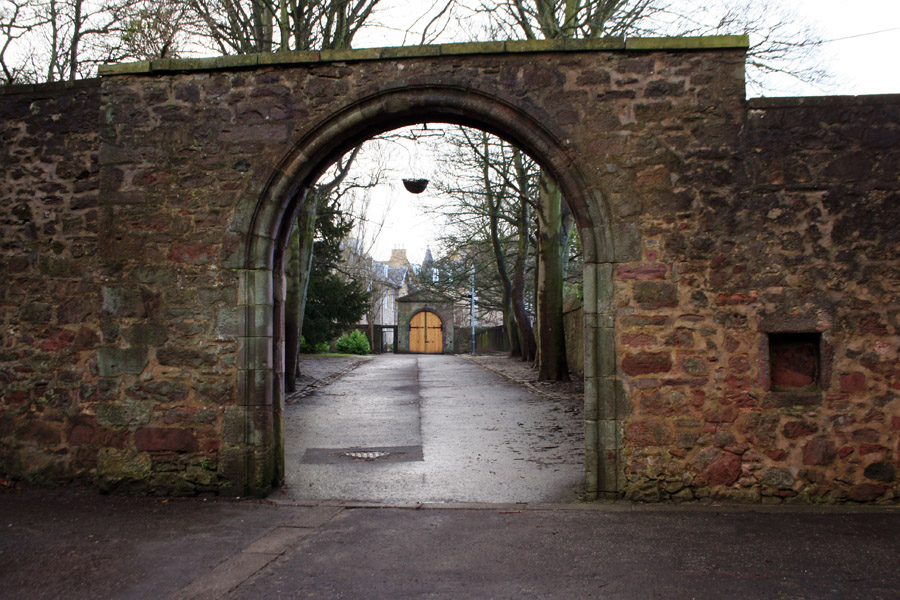 A pair of educational castles in Edinburgh

We stayed in Edinburgh today, but still managed to see two castles, both of which are now playing their parts in the education of the nation!

Bruntsfield House – as its name suggest, on the edge of Bruntsfield Links – is now home to James Gillespie’s High School, but started life as a castle, probably in the 14th century.

Joined onto the side of this wall is the south-west tower of a largely 16th century Z-plan castle – the older castle was burned down in 1544 during the Rough Wooing, then subsequently rebuilt.

Passing through the archway brings you out into what would have been the courtyard, and is now the playground. The original entrance to the house, now blocked, can still be seen just below the circular stair tower.

In 1605 Bruntsfield House was extended, with a new wing added to the east. This addition reflected the relative stability in Edinburgh at the time, and so was less defensive, featuring much bigger windows than the older section.

Continuing through Bruntsfield we reached Merchiston, which is home to another seat of learning, Napier University. Sitting at the centre of this campus is Merchiston Castle.

A five-storey L-plan tower, it is thought to have been built in the mid-15th century by Alexander Napier. However it is more famous as the birthplace in 1550 of John Napier, the discoverer of logarithms.

The castle is accessed via a modern staircase up to a second floor doorway.

It is built on a rocky outcrop, which can still be seen to the side and rear of the building.

During the 17th century the roofline was altered, with the addition of a crow-stepped building within the parapet walk.

In 1833 Merchiston Castle School was established in the tower, but in 1930 it moved to a new site at Colinton, around the ruins of Colinton Castle. Then in 1956 Napier Technical College (now Napier University) was built around Merchiston Castle, and new glass-walled rooms connect the old tower to the new buidlings.

Interestingly there are castles on two other Napier University campuses – Craig House and Craiglockhart Castle.