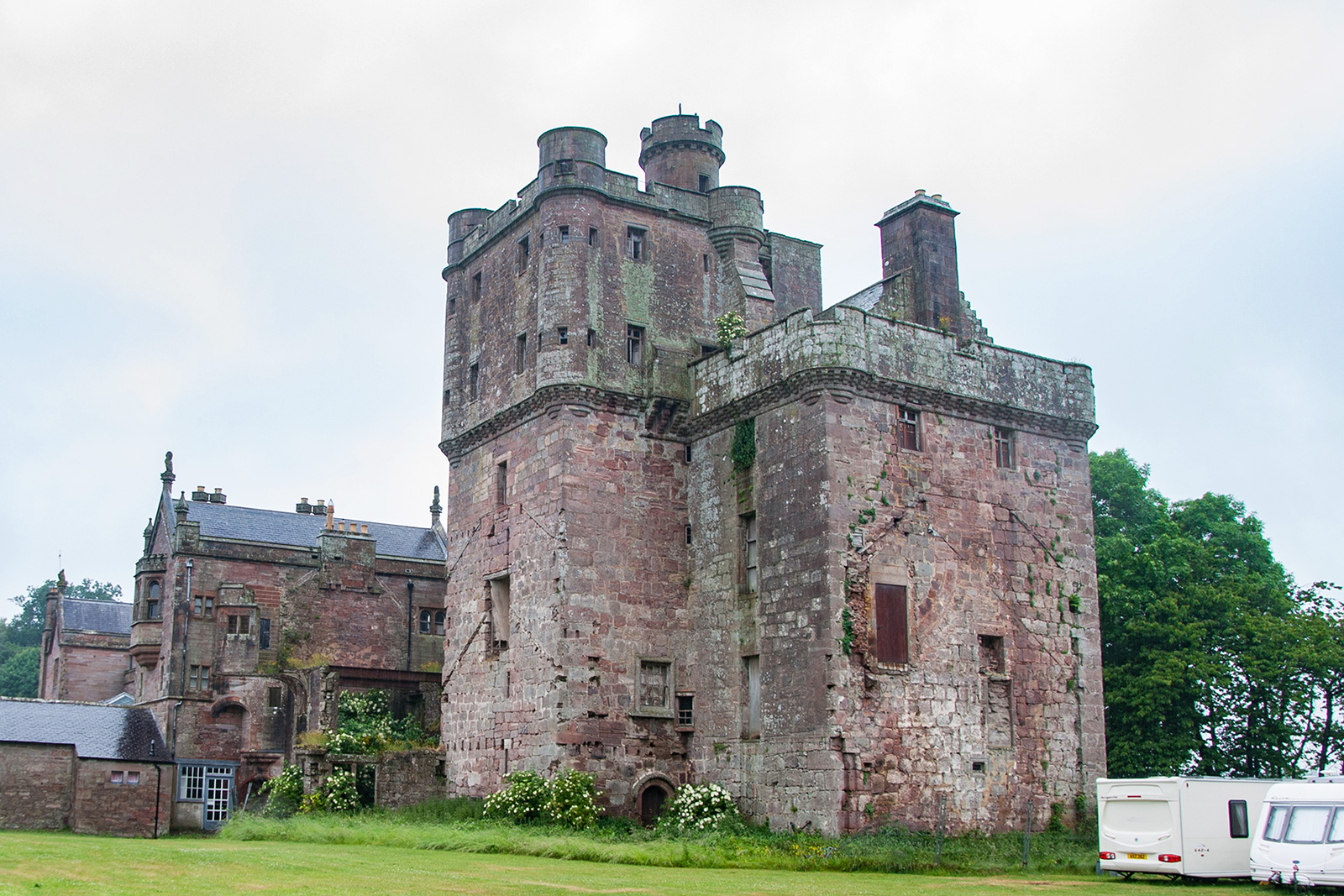 A dreich day of Dumfriesshire castles

On a very dreich return trip from England a couple of years ago we took a left at Gretna and headed into Dumfriesshire in search of castles to make the journey home a bit more interesting.

Our first stop was on the west edge of Annan where in the early 12th century David I granted land to the de Brus family on the east bank of the River Annan, and soon after 1124 they began building a timber and earthwork castle.

Annan Castle consists of a motte at the north end of a bailey, separated from it by a ditch. The motte has a diameter of around 15m and rises to a height of around 6m and is now covered in trees.

The flat area of the bailey stretches to a length of some 260m and is now a public park.

The rain was pretty Biblical by this point so after slipping and sliding our way down the ditch in an attempt to climb the motte we admitted defeat and headed down towards the river below. Just below the castle the three-arched Annan Bridge carries the B721 across the river and into the town. It was built between 1824 and 1827 to a design by Robert Stevenson. 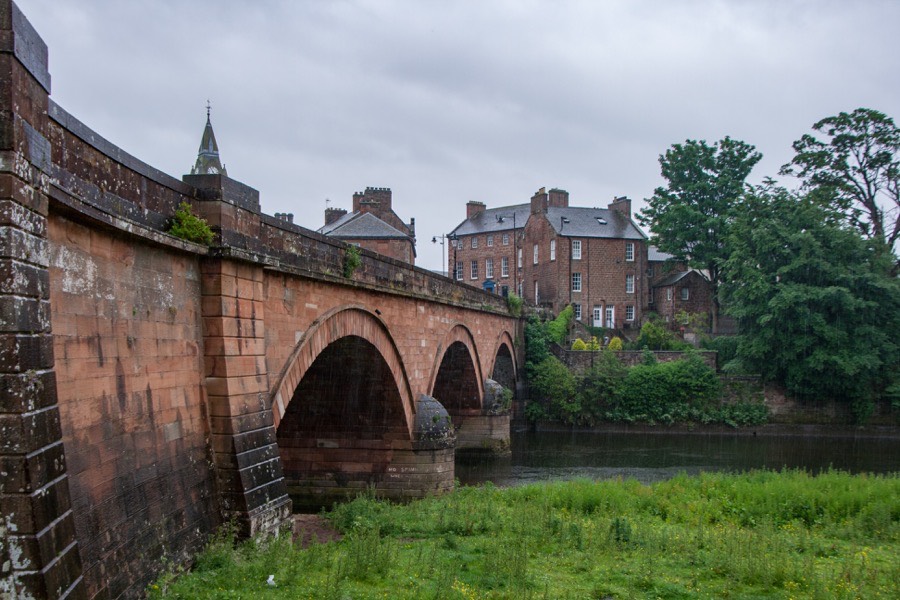 The weather wasn’t conducive to wandering so we made our way back to the car and drove across the bridge on our way north-west to Hoddom Castle.

Hoddom Castle is a substantial tower house which was built by Sir John Maxwell, later 6th Lord Herries of Terregles, in 1565. It stands within a bend in the River Annan, although at a distance of several hundred metres to the riverbank. Immediately to the east of the castle the land falls away down to the land defined by the river and to the south is a deep gully, providing natural protection on two sides. The gully is crossed by a bridge which was built in the 19th century.

The castle originally stood at the north-east corner of a courtyard, and sections of the courtyard wall still stand (although parts of it were rebuilt in the 19th century. At each of the other three corners of the courtyard were two storey round towers with vaulted basements and splayed gun-loops.

A gateway in the west courtyard wall is thought to date from the late 17th or early 18th centuries.

In 1826 the then owner, Lt Gen Matthew Sharpe, commissioned William Burn to remodel the castle, extending it to the south and west, work which was completed in 1832. Later in the 19th century Wardrop and Anderson were commissioned to add neo-Jacobean extensions to the north and west of the castle.

Hoddom Castle was subsequently by the War Office during the Second World War and was occupied during the War by Commandos, French Canadian troops, the 51st Highland Division and around 400 Churchill tanks which would later see service in North Africa. In 1947 the contents of the castle were sold and in 1953 the demolition of the south and west wings began. William Burn’s additions were largely demolished in the 1970s, leaving extensive scarring on the old tower. The remaining 19th century additions to the north were used as offices for a caravan park which now occupies the grounds to the west of the tower.

It was really too wet for more than the quickest of explorations, but a glimpse of colour in the undergrowth proved too intriguing and the dense canopy of the rhododendrons at least provided some shelter from the rain.

After a brief respite from the rain under the rhododendrons we ventured back out into the downpour. Our original plan of climbing a nearby hill to Repentance Tower was swiftly rejected in favour of making do with a photo from a distance and heading for the car.

A short distance away, just after crossing the River Annan once more, we stopped briefly to take a photo of Hallguards, a multi-period house built on the site of Old Hoddom Castle which unsurprisingly was Hoddom Castle‘s predecessor.

With the rain continuing to pour we decided to save the remaining castles on our itinerary for another, drier, day and set off north on our way home.