A day trip including Schiehallion

As with yesterday I arrived at the Moulin Hotel at 10am to pick up my friends Graham and Hazel, but today we had an altogether more physically-challenging itinerary!

I’ll talk about Schiehallion to anyone who’ll listen, so Graham and Hazel had heard plenty about this magical mountain and decided they wanted to have a go at climbing it. But not before seeing a few ground-level sights first. We drove down into Pitlochry then north on the route of General Wade’s military road to Killiecrankie where there’s a standing stone known as Claverhouse’s Stone. This prehistoric stone is where Claverhouse is said to have died, having retired here shot from the nearby Battle of Killiecrankie. 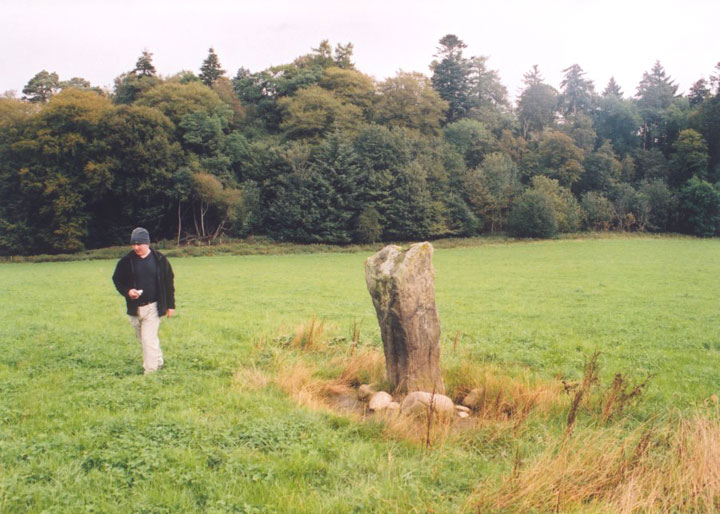 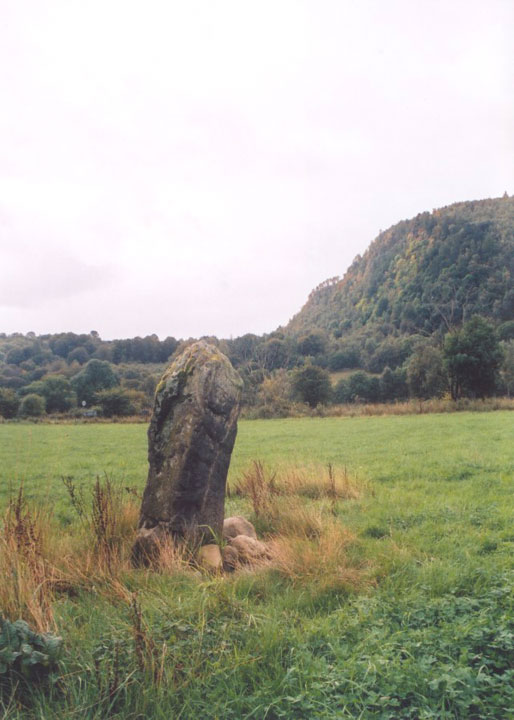 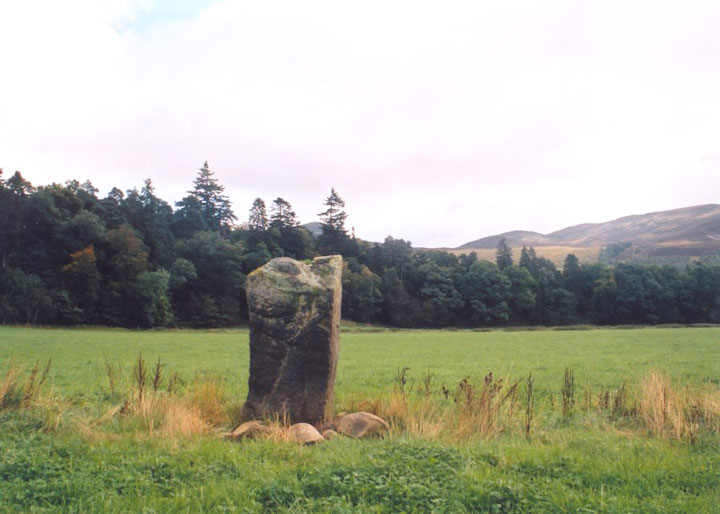 Continuing on, we drove under the A9 and through the picturesque village of Blair Atholl, passing the magnificent Blair Castle on our way to the House of Bruar.

The House of Bruar is a collection of upmarket shops sitting at the edge of a wood just off the A9, and while the clothes sold their might not be to everyone’s taste, there’s no denying that the food on offer is a fantastic advert for Scotland’s produce. As if to emphasise the quality of the food, when Graham spotted a familiar face we realised it was Camilla Parker-Bowles, who we overhead saying she “must buy some sprats for her husband” (Prince Charles)!

Continuing on the theme from yesterday, Graham umm’d and ahh’d over what culinary delights to purchase. After the difficult decisions had been made, we bought some sandwiches and took all the shopping back to the car before heading up behind the House of Bruar on foot.

The Falls of Bruar are a series of spectacular waterfalls, best seen after heavy rain. We were lucky with the weather today, it was nice and dry, but yesterday‘s rain only served to make the falls even more impressive than usual.

High up above the House of Bruar a bridge crosses the burn, where Graham obligingly posed for the camera.

The return path comes back down the other side of the burn, and looking back up the hill gives a great view of the bridge spanning the falls.

Further down is another smaller bridge. 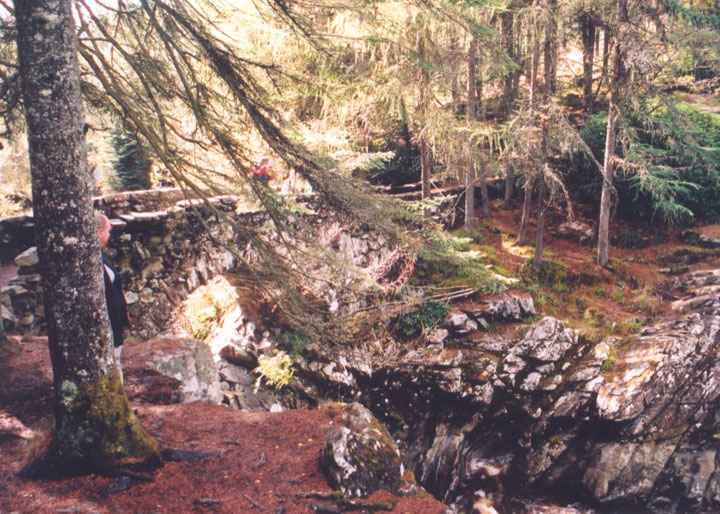 The walk had served well as a warm-up for Schiehallion, so back at the car we set off in that direction, stopping off briefly just outside the House of Bruar to see the big lump of rock that is Clach na h-Iobairt standing stone. 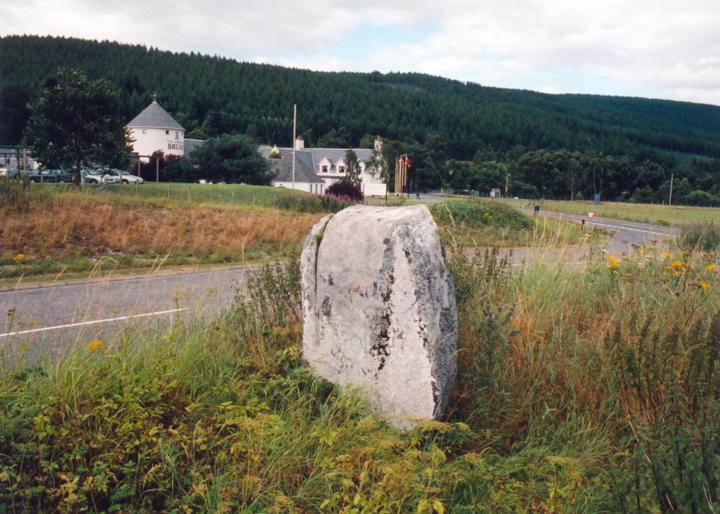 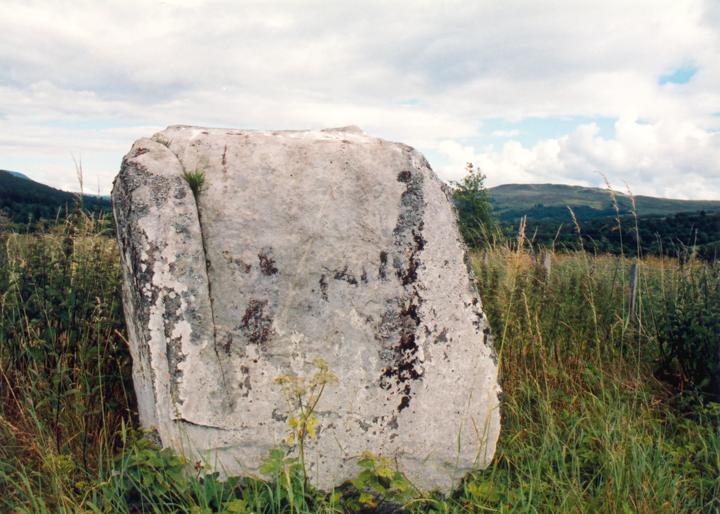 Then it was back under the A9, through Calvine and down Glen Errochty to Trinafour, turning south-east for the long, straight descent to Tummel Bridge (again on the route of General Wade’s military road ) to cross the River Tummel before climbing back up the other side of Strathtummel to the car park for Schiehallion at Braes of Foss.

On the approach path to Schiehallion is the Braes of Foss cup-marked boulder, which today had it’s numerous cups picked out beautifully by the sun. 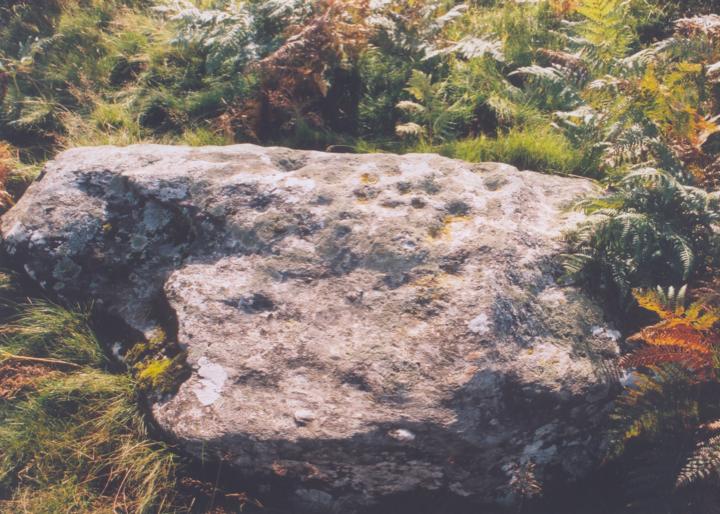 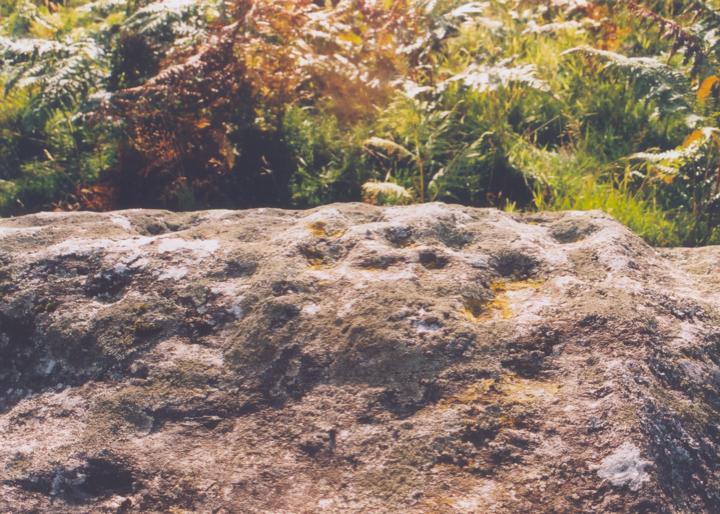 Soon after this rock the path starts to get steeper and the breathing starts to get heavier as you climb up the eastern slope of the mountain. The summit was disappearing and appearing as the clouds moved in the wind, so I wasn’t sure whether or not we’d get a view from the top, but a view is only the cherry on the top of climbing a mountain anyway.

After getting on for a couple of hours’ walking and several stops to catch the breath and drink in the views across Perthshire, we reached the summit, enshrouded in cloud. As we looked for some comfy rocks to have our sandwiches on, the cloud lifted and revealed to us a magnificent view back towards Loch Tummel.

Taking advantage of the break in the clouds, Graham and Hazel posed for a photo. 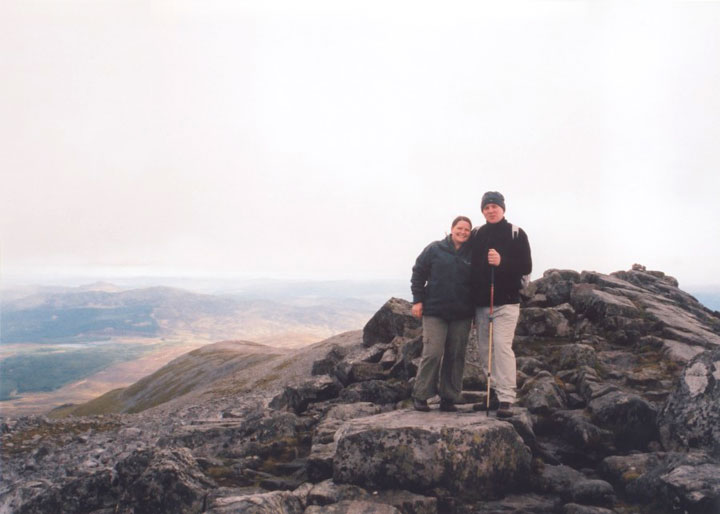 It wasn’t long before the cloud came in again, so we moved off the summit to a slightly more sheltered spot to have our sandwiches from the House of Bruar before starting the long descent back to the car, which of course was much easier than the climb up the way.

By the time we reached the car the sun had started to go down, so we made a mad dash along to Kinloch Rannoch in an attempt to get a photo of the sun setting over the loch, but the clouds were obscuring it so we drove around the loch to the Macdonald Loch Rannoch resort to take a photo of Schiehallion from looking towards its iconic western end.

It was getting late by now and I had to be up early-ish for a work trip to Norway tomorrow, so we headed along Strathtummel in the dark on our way back to the Moulin Inn, where we said our goodbyes – same again next year Graham?