There are numerous options available to those looking to stop the ferocious midge from biting.

Since midges only have small mouths, they are unable to bite through clothing. So one option is to keep your skin covered at all times in areas frequented by midges. It’s possible to buy mosquito head nets which cover your head, face and neck and protect you from bites.

However, not everyone is appreciative of this look as a fashion statement, so most people go down the route of using an insect repellent. There are several different products on the market, four of which I have tested personally. 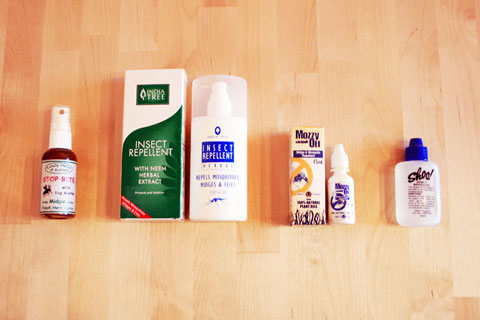 India Tree Insect Repellent is an alcohol-based spray which uses extracts from the Neem tree as its active ingredient. Made by the A. Vogel company (previously known as NeemCo) it has a pleasant smell of Bergamot, Rosemary and Eucalyptus. We tested it on the West Highland Way and it certainly seemed to be effective at reducing the number of midge bites.

Mozzy Off cocktail uses 100% natural plant oils as its base, and while it also proved to be effective on our West Highland Way test, it has quite a pungent Eucalyptus smell and wasn’t popular because of that. Made in Scotland, it is very ethical as it is biodegradable, not tested on animals, and packaged in a recycled (and recyclable) bottle.

Mozzy Off is also available from Amazon.

Shoo! has the most artificial smell of the four repellents tested, which is unsurprising as its active ingredient is DMP. Effective at stopping bites, the smell was too much compared to the sweeter-smelling alternatives, and this one got the thumbs down from our intrepid testers.

Made in Scotland by Totally Herby, Stop Bite is a 100% natural insect repellent made from Bog Myrtle, Rosemary, Lavender and Witch Hazel. As well as being natural it is also ethical as it is not tested on animals. The Bog Myrtle gives this repellent a sweet smell – too sweet for some of the testers – and also seems to provide it with excellent midge-repelling abilities. Totally Herby also now make ItchEase for soothing insect bites.

Of the four insect repellents tested, my personal favourite was Stop Bite.

Numerous other brands of insect repellent are available, including Eureka! and Smidge (from the people behind the Scottish Midge Forecast), these are just the ones that I have personally tested.

Many people swear by Avon’s Skin So Soft range as the ultimate midge repellent, with the body spray being the most practical product in the range for midge-repelling use.

Many people are now interested in 100% natural insect repellents. As well as Mozzy Off and Stop Bite that are mentioned above, the following 100% natural options are available, although I haven’t tested these ones yet.

These patches are applied directly to the skin, and the active ingredient, Vitamin B1, is absorbed into the bloodstream through the skin. They are said to be effective for up to 36 hours, when applied two hours before going outdoors, and are also waterproof.

Containing 60 mgs of essential oils, including Citronella, Eucalyptus and Citriodora, these patches last for up to 10 hours, and are activated by squeezing them. The oils are said to be amongst the most effective natural essences known for preventing insect bites, having been used for hundreds of years.

This balm is applied directly to the skin to protect against midges, mosquitoes and other biting insects. It is free from artifical chemicals and colourants.

What to do if you get bitten

As difficult as it may be, and despite how initially satisfying the result can be, try not to scratch or squeeze any bites, as it will only irritate and inflame them.

Oral anti-histamines will help to reduce any swelling, as will creams such as Anthisan Bite & Sting Cream and those containing chamomile. If you don’t have a specialist cream, the anaesthetic properties of Germolene will soothe bites, although it doesn’t reduce the swelling.

There is also a miraculous device which at the push of a button delivers a small electrical charge to the bite. The science behind it is a mystery to me, but it really does work in stopping bites from itching.

The Scottish Midge Forecast bravely and selflessly trap and count midges in order to map midge levels across Scotland and provide a daily midge forecast.

If you’re at all concerned about the midge levels where you’re travelling, check out the Scottish Midge Forecast in advance.